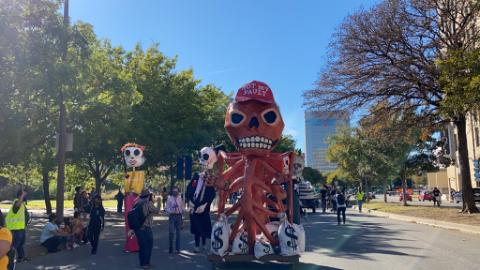 Loved Ones Who Lost Family to COVID-19 Represented

Yulissa Madrid walked through downtown Dallas on November 1 with more than 400 people taking part in a Día de Los Muertos march and rally to remember those who have died of COVID-19.

Madrid and her husband carried a framed picture of her 89-year-old great-grand uncle who died of coronavirus in October after he was misdiagnosed.

“He had a pre-existing condition at the time, and he went to get checked at the hospital for COVID, and they sent him home with the flu, and a few weeks later, he died,”  Madrid said, adding that she had to be in the march to represent her uncle.  “It was extremely important for us to be here today to let the people know to come out and vote on Tuesday and vote for those who didn’t get the opportunity because they died because of Trump, number 45 in the White House.”

Researchers at John Hopkins University Coronavirus Resource Center have ranked Dallas County sixth in the country with the highest number of confirmed cases of COVID-19 with close to 97,000 cases and 1,267 deaths. According to Dallas County Health and Human Services, more than half of those deaths, 518, were Hispanics.

The Dia De Los Muertos march and rally were organized by the League of United Latin American Citizens (LULAC.) The Day of the Dead is a Mexican holiday when families pray, remember and honor family and friends who have died. Three gigantic caricature calaveras or skeletons in the march represented the cultural celebration of the lives lost due to the pandemic. One of them was orange with a red hat that read, “Not My Fault.”

“This event is our community’s way of sending a message to America that Latinos have suffered disproportionately and needlessly in this pandemic,” said Garcia. “We are the country’s essential workers, and the price we have paid and are still paying is far too high because some of our elected leaders see Latinas as expendable and have failed to enact policies that protect us.”

Beatriz Ibarra’s mother, Maria Carmen, took care of her own elderly mother and only went out to shop for food. She died two weeks ago of COVID-19 in Dallas, leaving behind five children; one as young as two-years-old.

“This was a very healthy 47-year-old, and she had her whole life ahead of her,” Ibarra’s told those at the rally. “This is why I urge you to take precautions…we need to come together, not only as a community but as a country.”

According to the Pew Research Center, this year, Latinos are expected for the first time to be the nation’s largest racial or ethnic minority in a U.S. presidential election, with a record 32 million projected to be eligible to vote. Texas has 5.6 million eligible Latino voters.

Ibarra’s family held photos of her mother and clung to one other as they cried in grief. As tears rolled down her face, she reminded the crowd around her that their vote on Tuesday could make a difference. “You have the power to decide the quality of life you want for yourself and future generations.”

Advertisement. Scroll to continue reading.
Prev ArticleNext Article
Use your ← → (arrow) keys to browse
In this article:Rebecca Aguilar

On the Bench: Dennise Garcia, A Latina Trailblazer Leaves One Courtroom for a Higher Court in Dallas

By Rebecca AguilarSenior Correspondent Dennise Garcia felt bittersweet as she packed her framed family photos, books, and other personal mementos from her office at...