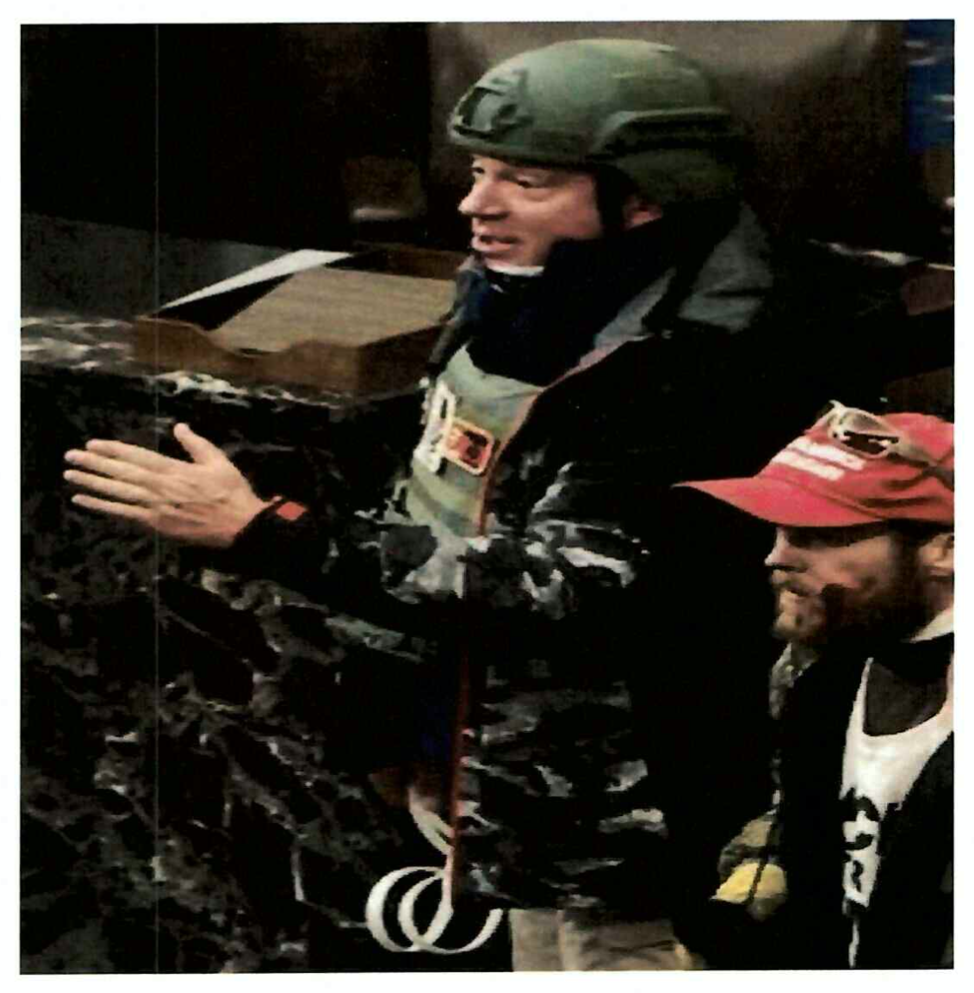 That’s when a federal judge decided the Grapevine man could be released from FBI custody on conditions that he wear an ankle monitor and remain at home until his trial.

The 53-year-old turned himself in to Grapevine police four days after the Capitol building riots on January 6. Then the FBI took custody of him and booked him on two federal charges.

Texas Metro News obtained the FBI’s arrest warrant and criminal complaint that detailed Brocks involvement in the riot. The court documents state Brock, “knowingly and willfully joined and encouraged a crowd of individuals who forcibly entered the U.S. Capitol and impeded, disrupted, and disturbed the orderly conduct of the business of the United States House of Representatives and the United States Senate.”

The court documents also included photos of Brock on the Senate floor with a hand full of zip-tie restraints and dressed in military clothes.

Federal agents were able to find Brock after two people, including Brock’s ex-wife, identified him from photos and video they saw on social media and television.

She told investigators she recognized him in a photograph dressed in a military-style helmet, khaki pants, gray and black fatigues over a military vest, and a patch from his military service. According to the criminal complaint, she said, “I just know that when I saw this was happening, I was afraid he would be there. I think you already know he was there. It is such a good picture of him, and I recognized his patch.”

Thursday, prosecutors showed the Fort Worth judge the photos of Brock on the Senate floor. An FBI agent testified that they found the military gear Brock was wearing during the riot at his Grapevine home. They wanted to prove he was a danger to the public.

Brock confirmed to The New Yorker that he was in the photos from the Senate floor, and he also said that he had gone to Washington D.C. to demonstrate peacefully.

Brock’s defense attorneys showed the judge his military service and his honorable discharge from the military.

Texas Metro News also obtained the document with the judge’s conditions of release. Brock was ordered to turn over any passports and any weapons. He was also ordered to stay off the internet unless permitted by the courts, while remaining home on release.

His trial date has not been set yet.

Thursday, FBI Director Chris Wray said his agency had identified more than 200 people as suspects in the riot.

He had one warning for the suspects still on the loose, “We know who you are if you’re out there, and FBI agents are coming to find you.”

Prev ArticleNext Article
Use your ← → (arrow) keys to browse
In this article:Rebecca Aguilar

The SPJ Distinguished Teaching in Journalism Award goes to Dorothy Bland. She is a true role model for students, educators and professional journalists, and she...

A conversation on the state of journalism at the Dallas LiteraryFestival at the African American Museum. Panelists were: Charles Blow of the Washington Post and Black News...

On the Bench: Dennise Garcia, A Latina Trailblazer Leaves One Courtroom for a Higher Court in Dallas

By Rebecca AguilarSenior Correspondent Dennise Garcia felt bittersweet as she packed her framed family photos, books, and other personal mementos from her office at...

Loved Ones Who Lost Family to COVID-19 Represented Story and Photos by Rebecca AguilarSenior Correspondent Yulissa Madrid walked through downtown Dallas on November 1...