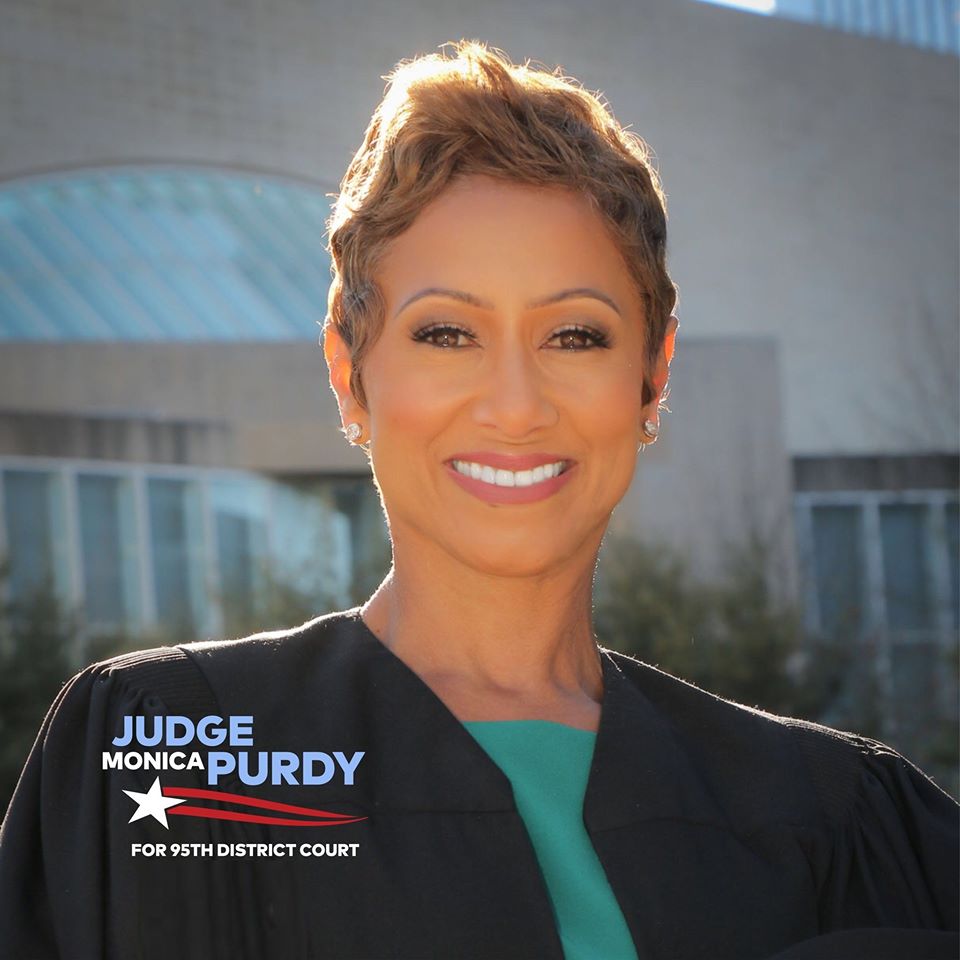 My name is Judge Monica Purdy. I am a lifelong Democrat and I am running for the 95th State Civil District Court in Dallas County. With the 2020 Democratic Primary election just days away, I want to take this opportunity to tell you why I am running for this bench, share my qualifications and remind you how critical it is to exercise your right to vote.

Why I Am Running

I currently serve as an Associate Judge supporting seven of the 13 State Civil District Courts. I have served you in this role since my unanimous appointment in 2013 by the elected presiding civil judges. Since my appointment, I have consistently received amongst the highest ratings, being ranked as one of the “top two” civil judges in the yearly judicial evaluation poll, evaluating judicial performance, conducted by the Dallas Bar Association of lawyers appearing before my court.

After seven years of proudly working for the citizens of Dallas County as an Associate Judge and three years prior as a Municipal Court Judge for the City of Dallas, I decided the time is NOW to serve you and affect change in our Civil Courts at the next level as an elected judge.

As an Associate Judge, I currently handle several of the day-to-day duties of an elected judge including but not limited to presiding over hearings on a range of motions, injunctions, temporary restraining orders, discovery disputes, and both jury and bench trials. My extensive knowledge of the law and critical decision-making skills have already been put to the test over the past decade and now I want to put that experience to work for you in a specific court.

I am running for the 95th State Civil District Court to ensure justice is served in every case that comes before the court and to guarantee both plaintiffs and defendants have their day in court. Whether it is a breach of contract, personal injury, property damage, defamation or another type of civil case, you can rest assured that I will continue to mete out justice impartially and preside with the integrity and judicial temperament you expect from your elected judges.

Poised And Ready To Preside

My journey to the 2020 Democratic Primary is paved with hard work, commitment and the heart of a public servant. I have been practicing law for more than 26 years, with 20 of those years in civil litigation including the latter 10 years as a judge.

I am a native of Tampa, Florida, and a proud product of not one, but two, historically Black colleges and universities — Spelman College in Atlanta, Georgia, a highly selective, liberal arts college widely recognized as a global leader in the education of women of African descent, where I earned my undergraduate degree, and the Thurgood Marshall School of Law at Texas Southern University in Houston, Texas, where I earned my law degree.

While at Thurgood Marshall, I was a member of Law Review and began my legal career at the Houston office of a national law firm collecting various governmental receivables. Building a practice focused on civil litigation and bankruptcy matters, I relocated to the firm’s Dallas office and was later promoted to partner. In this role, I assisted with various municipalities and other public agencies in the recovery of property taxes and related revenue, and successfully represented these governmental clients, which also included Dallas County, in a number of cases heard in jurisdictions across the United States.

In 2004, to accommodate the needs of my growing family, I opened and built a private law practice in Dallas, primarily serving as regional counsel for Fortune 500 clients in litigation and collection disputes before state and federal courts. In 2010, I was appointed as Associate Judge for the City of Dallas, a position that allowed me to maintain a private practice while performing significant duties in the enforcement of the city’s laws and ordinances.

Active In The Community

A staunch advocate for education, I helped develop the Legal Studies Department curriculum for Paul Quinn College in Dallas, Texas where I previously taught as an adjunct professor. I have served the community as President of the J.L. Turner Legal Association; Regional Director for the National Bar Association and conducted countless community voter engagement seminars.

I am a member of Alpha Xi Omega Chapter of Alpha Kappa Alpha Sorority, Incorporated, Trinity (TX) Chapter of The Links, Incorporated, Dallas Chapter of Jack and Jill of America, Inc., and St. Luke “Community” United Methodist Church, and last but certainly not least, I am married to a wonderful, supportive husband and we have two amazing children.

Your Vote, Your Voice

Today, our nation is divided more than we have ever witnessed in the 21st century. The disparities minorities and women continue to endure in the workplace, in our educational and justice systems are unacceptable and serve as a reminder that although we have come a long way, there is still much work to be done. That is why, now more than ever, it is important to make your voice heard at the ballot box.

To have a seat at the table in the conversation on real change and improving the quality of life for you, your loved ones and for generations to come, I encourage you to exercise your right to vote in 2020. It is up to YOU to make a difference in your community by electing leaders who represent the interests of ALL citizens. Whether you vote early or on Election Day, please participate in the process, take five people with you to the polls and vote DEMOCRAT to level the playing field and achieve equity for every Dallas County citizen.

Reminder that House Bill 25 eliminated the straight-ticket voting option for all races in Texas beginning with the upcoming 2020 Primary election, so it is critical that you select a candidate in EACH INDIVIDUAL RACE.

Please take your time, vote ALL THE WAY DOWN THE BALLOT and look for my name, JUDGE MONICA PURDY.