It was a night of protests and unrest in Brooklyn Center following the police killing of 20-year-old Daunte Wright, who was shot by Brooklyn Center police Sunday afternoon after a traffic stop.

Brooklyn Center police stated that they were attempting to arrest Wright for having outstanding misdemeanor warrants. During a Monday afternoon press conference, Brooklyn Center Police Chief Tim Gannon released the police bodycam footage of the incident.

The video showed that after police attempted to arrest Wright, he ran to his car. After a struggle with an officer, the officer shot him, and the car rolls down the street. A voice could be heard saying “taser, taser” in the background before the shooting, and “Holy sh*t; I just shot him” after the shooting. Police Chief Gannon said that after watching the video, it’s his belief that the officer mistook her taser for her gun resulting in an “accidential discharge” of the officer’s handgun. The police chief also said there was no gun found in Wright’s car.

The officer who shot Wright is on administrative leave pending an investigation by the Bureau of Criminal Apprehension (BCA). The officer’s name was not released at the press conference. Brooklyn Center Mayor Mike Elliott said he thinks the officer should be fired.

According to Daunte Wright’s mother Katie Wright, Daunte had just gone to the car wash and was driving when she received a call from him.

He told her that the police had pulled him over because of air fresheners hanging in his rearview mirror. Katie Wright said she told him to give the phone to the officers so she could give them her insurance information since she had just given the car to Daunte.

Katie Wright said after that, “I heard the police officer come to the window and say put the phone down and get out of the car and I heard Daunte ask, ‘Why, do I have any warrants?”

She said she heard the police say, “We will explain to you when you get out of the car.”

“Then I heard the phone being put on the dashboard or dropped and then I heard scuffling, Katie Wright said. “And I heard the police officer say, ‘Daunte, don’t run.’ And the other officer said, ‘Put the phone down,’ and hung it up. And about a minute later, I called and his girlfriend answered. She had been a passenger in the car and she said he had been shot.”

Katie Wright said Daunte’s girlfriend put the phone on the driver’s side of the car and because they were face-timing she said, “I saw my son laying there shot.”

After the shooting, a large crowd began to gather near the intersection of 63 rd and Lee. The police had set up the yellow police tape blocking the onlookers’ ability to head up the street to Kathrene where Daunte’s Wright’s body lay covered in a tent. His body was on the scene for hours.

The gathering turned into an impromptu protest as hundreds of people began showing up. Brooklyn Center police responded by sending police in riot gear to the intersection. Their presence was seen as a provocation by some in the crowd as several of the young people rushed to confront them and yell and attempt to engage them.

Despite pleas by activists on the scene to be smart and not allow their anger to detract from the attention needed to get justice for Wright, some young people attempted to smash the police cars that were parked behind the police tape. One man was shot with what appeared to be some kind of projectile in either his head or neck and was rushed to the hospital by volunteer medics on the scene.

Calm was restored after that as the crowd chanted his name and activists implored people to remain peaceful. Daunte’s mother and father were able to address the crowd using a portable sound system someone had brought to the scene. They asked the crowd again to remain peaceful and work to get justice for Daunte.

Clouds of tear gas could be seen as police attempted to clear the area. Later in the night, around 11:30 pm, the crowds began to get in cars and leave after it was reported that police were attempting to block them all in.

There were reports that several stores were looted in Brooklyn Center overnight and a few on Lake Street in Minneapolis. 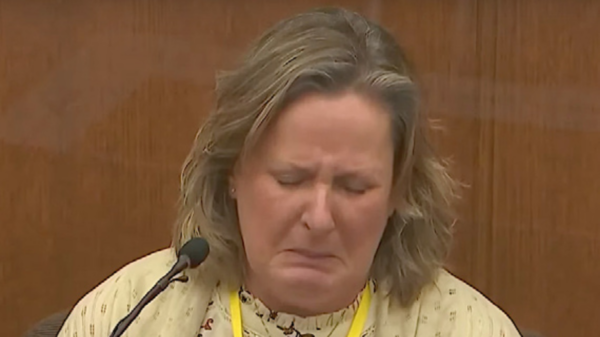 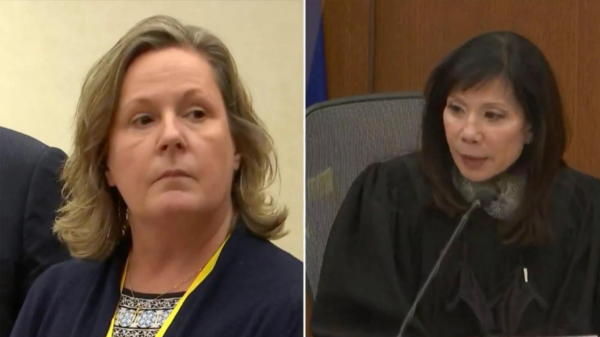