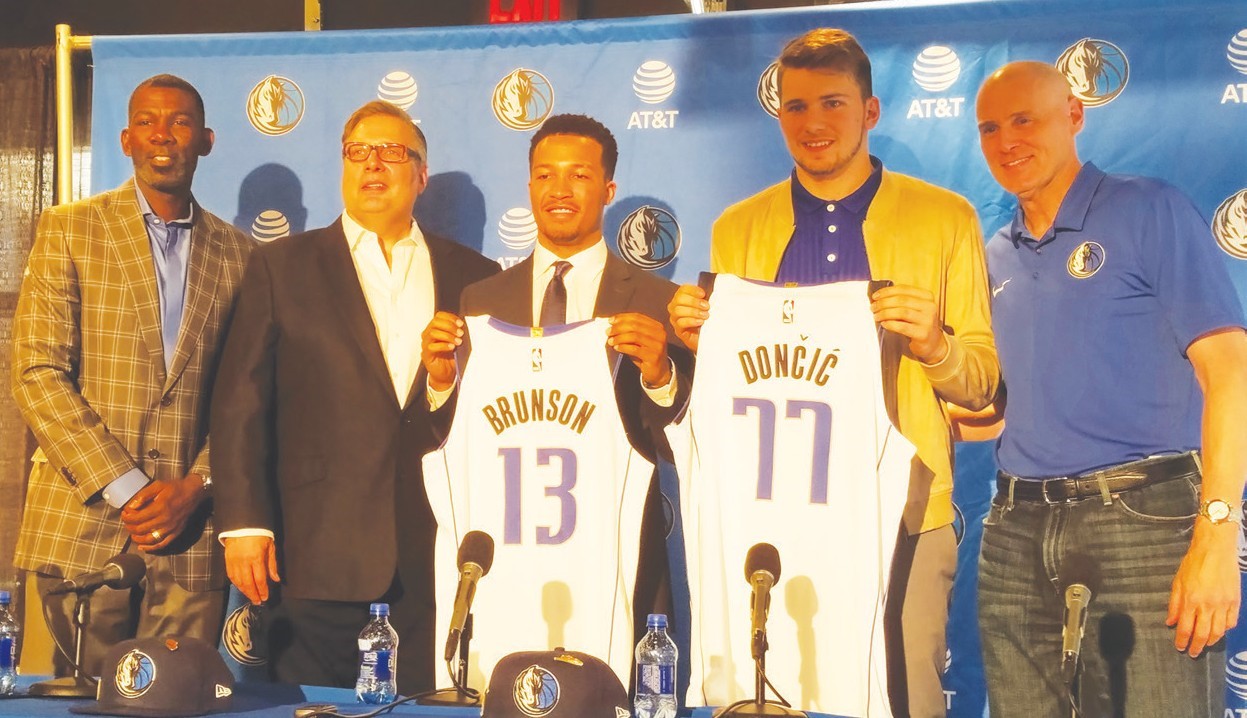 Looking to both to rebuild and get back to winning and making the playoffs, the Dallas Mavericks drafted European sensation Luka Doncic and two-time NCAA Champion (2016, 2018) Jalen Brunson in last month’s 2018 NBA Draft.

The Mavericks held the fifth pick in this year’s draft for the first time in the 38-year draft history of the franchise. Doncic was chosen third overall by the Atlanta Hawks, but the Mavs entered a deal that let them acquire the draft rights to Doncic from the Hawks in exchange for the draft rights to fifth overall pick Trae Young and a protected 2019 first round draft pick.

They got the player they wanted all along. “We’re very fortunate. Luka Doncic is the guy that we targeted to get in this draft if there was any way possible to do it,” said Head Coach Rick Carlisle. “At one point, we felt there might be a slight chance he could fall to us, but it became pretty clear that there was no way that was going to happen, he was just too good.

“We made this deal and we moved up (in the draft) and got him. Atlanta got a great player in Trae Young and we got a guy we think is a franchise foundation piece and so, it’s a really great day for the Mavericks organization,” Carlisle continued.

“I am truly excited to be a part of the Dallas Mavericks, the NBA. I am happy to play with all the superstars. It’s like a dream come true,” said Doncic during his introductory press conference at American Airlines Center. “Dirk is so amazing. There are no words to describe him. He’s a great person, great leader. I am really happy to be part of his career and I want to learn so much from him.”

Carlisle said Doncic is a playmaker who will “make plays and make people better.”

“This kid has won everything there is to win in European and international basketball and he’s done it at an age that is unprecedented,” Carlisle said. “He’s going to be a great guy to play with Dennis Smith Jr., Harrison Barnes, they’re going to enhance his game, he’s going to enhance theirs. We’re really excited. He seems like a humble kid, that really loves to play. It’s a big day for us.”

The Mavs also selected guard Jalen Brunson with the 33rd overall pick in the 2018 NBA Draft. Brunson (6-3, 190 lbs.) is a two-time NCAA Champion (2016, 2018) and an early-entry candidate to this year’s draft after spending three seasons at Villanova.

As a junior, he averaged 18.9 points, 3.1 rebounds and 4.6 assists on his way to winning Big East Player of the Year, Big East Scholar-Athlete of the Year and the Bob Cousy Award, given to the nation’s top point guard. He was also the only player in a Power 6 conference last season to shoot better than .520 from the field,

“He’s had an amazing college career, winning the championship two out of the last three years which is a remarkable achievement,” Carlisle said. “He’s obviously a winner. I never think you can have too many playmakers on a team.

“He has a real good handle on the total game, very resourceful view of the game and I think an underrated ability level and a great deal of toughness. And the character is obviously there.”

Brunson said he has been welcomed with open arms by the team.

“They’re a good group of guys. I love the staff. This is a great place to be and learn,” Brunson said. “They’re inviting me in with open arms. I’m truly excited.

“I will continue to get better and push forward,” Brunson said of his entry into the NBA. “I’m here now and ready to work.”