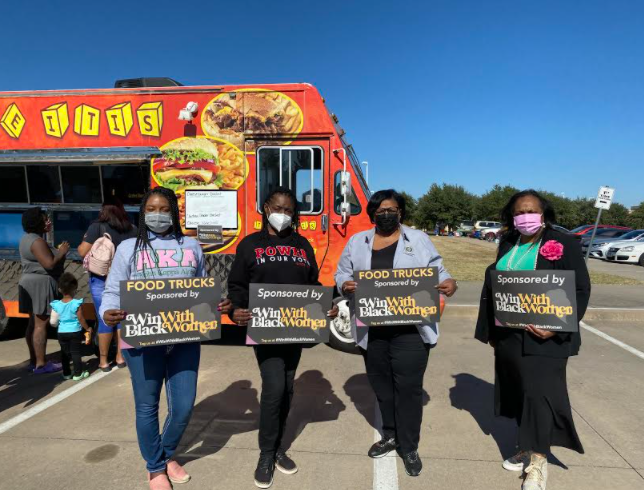 Instead, voters walked into several North Texas polling sites, cast their ballots and walked out–all within minutes–and with an added bonus: a meal courtesy of Win with Black Women.

The group of women from all industries, ages, and types of life experiences  came together with a common goal focusing on trying to eliminate and reduce the impact of racism and sexism on Black women, particularly towards Senator Harris.

Then, Win with Black Women focused on securing victory, not just for the Biden-Harris Campaign but for Black women up and down the ballot.

“This was part of elevating the power and agenda of Black women, fostering the power of this collective and working together,” said LeShawnda Larkin, of Dallas. “We’re not just supporting Senator Harris, but also women running in key markets (around the country).

“We asked ourselves, ‘What else can we do,’ and the food truck idea came together just one weekend before Election Day.

According to Larkin, feeding voters was not planned.

“It was a way to encourage people to stay and vote if there were long lines. It was also a way to put money back into the (Black community).”

“This was very hospitable,”  voter KaDeidra Weatherall said, while standing in line at The ITIS food truck with her son Cedric and partner Chris Washington, all of Dallas.

Voter Melvin Boyd, said he came to the polls Tuesday afternoon after receiving a call from a friend who told him food trucks were on site at Friendship-West.

Had it not been for the meal, he would not have come to vote, he said.

“I figured, if I’m going to come out here and wait, I might as well get something to eat,” said Boyd, 60, who said he was a first-time voter. “This encouraged me to come.”

Other polling sites were not so fortunate.

In Duncanville, lines were so short at two major sites at around 3 pm that Police Department Public Information Officer Alex Hamby said election employees were, “a bit bored.” So, they called police to ask if they would encourage voters to stop by.

“Someone from the high school called and said to tell people to come there as well as to the library,” Hamby said. “There were no lines.”

Earlier on Tuesday in Collin County, poll worker Latasha Sims, said there was a “slow trickle” of voters into her polling site at Collin College.

“That’s because people (voted) early because it was important enough,” said Sims. “There was a line during early voting and, as the weeks went on, the line got shorter and there were less people.”

Voters at some Dallas County sites experienced waits, but not for long.

At American Airlines Center, Robbie Bland, a campaign volunteer, said voters circled parts of the arena during Tuesday’s early morning hours, but the numbers slacked off by early afternoon.

“Right after 9 am, there was no line and voters were able to walk right up,” Bland said.

Meanwhile, voters at other polling sites were surprised: Volunteers there offered them food plates, bottled water, chips and other snacks.

“It has been quiet,” he said. “We think that’s because there was such large early voting turnouts that the polls were not that busy.”

At the Junior League polling site in Southwest Arlington, House District 94 candidate Alisa Simmons stood outside greeting voters as they parked and walked across the lawn into the polls.

“I think turnout is a little lighter today,” she said shortly after 4 pm. “People heeded our request to take advantage of early voting.”

Simmons said she had visited multiple polling sites in the city, beginning shortly after polls opened at 7 am in Tarrant County. She noticed far fewer voters, she said, than the numbers she and other candidates had encountered at the polls during early voting.

In Plano, police department Public Information Officer David Tiley, said that by 4 pm Tuesday, the department had fielded no calls from election sites.

He described the day as “very peaceful.”

In Houston, members of grassroots organizations in the city’s Fifth Ward, including the Black Panthers, supported community residents who were casting ballots by “patrolling” those sites.

Some voters appreciated the extra security.

“The Black Panthers were on their motorcycles near the polls to make sure the Fifth Ward community was able to vote,” said Lena Jones. “I felt that it was for the safety of the people and to keep the peace.”

Back at Friendship-West, Tamera and Jerry Jacob, owners of Holy Smokes BBQ, a Lewisville catering company, pulled a super-sized grill behind their pickup truck to the Oak Cliff church and parked it several hundred feet from the entrance.

The waft of grilled meat could be smelled an eighth of a mile away.

Jerry Jacob said he had watched television news accounts of voters waiting hours in line and anticipated waits at Friendship-West. He hoped to encourage voters to cast ballots despite potential waits. So, he and his wife decided they would offer ballot casters free, smoked hotlink sandwiches.

“I was expecting on November 3 it to be pretty crowded,” said Jacob, a U.S. Navy veteran. “(I thought) these people are going to be waiting two or three hours. I said, ‘OK, let’s do it.’”

The caterers served about 500 smoked hotlink sandwiches Tuesday by 2 pm.

“I want everyone to get out and vote,” she said. “Early voting was great, but success for me is (everyone else) getting out to vote.”

Dallas-area organizer Dr. Vivian Bradley Johnson said she and a coalition of peers from across the country raised nearly $40,000 to cater meals to be distributed at polling sites around the country, including in Dallas, Atlanta, New Orleans, DC., Detroit,  Milwaukee, Wis. and Tallahassee, Fla.

“I wanted to help make an impact and I joined the group six weeks ago,” said Johnson, of Dallas. “We pulled this together in about 24 hours and raised close to $40,000.”

“We wanted to do something so people would not have to worry about food while they were at the polls.” Tuesday, The ITIS food truck parked alongside the church and fielded a steady stream of orders.

By 2 pm, the chef said she had served nearly 200 orders when she had expected to serve that many throughout the entire day.