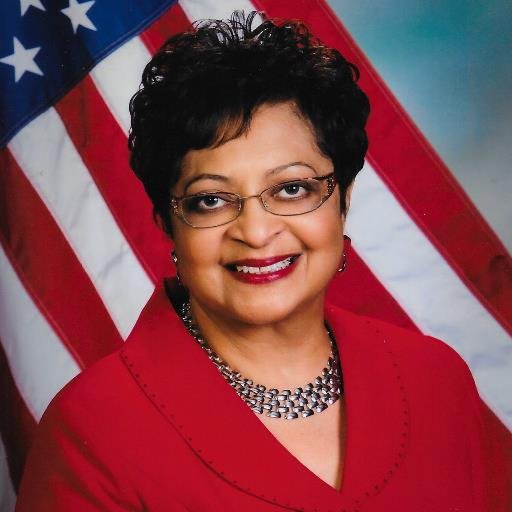 Over the weekend some citizens, friends and loved ones participated in a “We love our Mayor Prayer Caravan for DeSoto Mayor Curtistene Smith McCowan, who announced earlier this month that she had been diagnosed with cancer in her right lung. Many were in tears upon hearing the news that DeSoto’s first female Mayor McCowan, 72, died on October 28.

“We’ve lost a great committed leader,” said U.S. Congresswoman Eddie Bernice Johnson (D-TX), whose district includes DeSoto. The two were the only living African American females in the district to have schools named in their honor. “Her leadership spirit will be missed. Her influence and her leadership was felt in DeSoto, her first love.”

A strong advocate of education, some say she had many loves, and she was committed to her family, her faith and a life of service. In her 54th year of marriage, during an interview last December with Texas Metro News, she proudly stated that she and husband, Leon, had been married for 53 years.

“I married my high school sweetheart,” she said, noting that there was no resistance to their nuptials because, “Leon was such a great guy.”

She also shares a distinction with another elected official as the two were honored as distinguished alums of El Centro College, now Dallas College. Her fellow alum shared his expressions.

“She devoted a lot of her time and service to the public,” said Dallas County Commissioner John Wiley Price, adding that Mayor McCowan was a selfless leader, pointing out her service with Concerned Citizens of DeSoto, DeSoto School Board, City Council and even secretary of Dallas County Inland Port, to name a few. “She spent a lot of time serving.”

And that’s how many will remember her. According to Texas State Sen. Royce West, Mayor McCowan’s death hits close to home.

“We have lost a good person, a leader, caring person who in many instances put her family behind public service,” he said. “Curtistene will be missed. She loved her family, her community, her sorority, and fraternity brothers of Omega Psi Phi Fraternity. She lived a full life, a life well lived.”

Those sorority sisters had been diligent with their prayers and calls of support, says Dr. Andrea Hilburn.

She and Ella Goode Johnson are in a unique club with the Mayor: both having served as president of the Dallas Alumnae Chapter of Delta Sigma Theta Sorority, Inc.

“My phone is ringing off the wall,” said current president Dr. Hillburn as she fields calls from members. “The news was devastating.  She wasn’t just our soror, she was a community leader too.”

Goode Johnson has also been on “Mayor McCowan Watch,” as a two-time president who was a chapter leader when Mayor McCowan was initiated into the sorority.

It is with deep sadness and sisterly regard to have heard about the passing of my Delta Soror,” said the 31st and 43rd chapter president. “Mayor McCowan was a community leader who has built a reputation of being fair, just, dedicated and committed in all of her undertakings.

“As the first female Mayor of the All-America City of DeSoto who also witnessed the naming of a school in her honor some years ago, she will be remembered for the many good deeds she did and how well she did them.”

While some of her colleagues on the DeSoto City Council were still processing the news, a few shared their thoughts.

“Mayor McCowan was a community giant, of which, her love for family and community will go unmatched,” said the Honorable Nicole Raphiel, DeSoto City Councilmember, Place 3. “She was the engine that thought she could, and she did. She will be known as DeSoto’s greatest cheerleader. She saw the best in everyone she encountered and had an innate ability to love the excellence into you; and for that, I will forever miss her. My sincerest condolences to her beloved family and beloved City of DeSoto.

Her expressions were echoed by DeSoto City Councilmember, Place 2, Kay Brown-Patrick, who said she was in complete shock and heartbroken.

“My relationship with Mayor McCowan began well before I began my time on City Council, she was one of the reasons I elected to run for office,” said Brown-Patrick. “In my last conversation with her she stated she was counting on us to continue to move our great City forward.

And despite all of her many duties, she still managed to be very active, attending meetings, providing support, and she “did her part, because she always had time for Delta.”

“Even in the midst of her battle she had DeSoto in her heart. She was an amazing woman of God with a heart of service, class, and love for all and she loved the City and residents of DeSoto. My heart and prayers are with her husband Leon, her children, and the rest of her family & friends. Her legacy is unmatched and to say she will be missed is an understatement. Heaven gained a great one,” she added.

A longtime member of Kirkwood Temple Christian Methodist Episcopal Church, where she served as Chair of the Trustee Board, Mayor McCowan received a Bachelor’s Degree in Business Administration from Dallas Baptist University and an Associates Degree in Business Management from El Centro College. She was employed by the Federal Trade Commission for over 32 years, and served as Senior Investigator for over 18 years. She retired from the federal government on January 1, 2005, after more than 32 years of service.

Her service didn’t stop, as many point out.

Taking a moment from Election 2020, Dallas County Democratic Party Chair Carol Donovan paid homage to Mayor McCowan, “We grieve her passing and we celebrate her life and leadership!”

Former Lancaster ISD Superintendent and CEO of The Impact Institute, Dr. Larry Lewis shared his expressions upon hearing the news. “Curtistene McCowan was just an amazing woman of God. She loved her community, she loved her family, she loved DeSoto, and what a legacy she has left, but what a loss for all of us. I appreciate all the things that she did for me and with me. Wow, I just can’t believe it. She is so loved and then she loved everybody.”

Her service and leadership is extensive and noteworthy. Her bio is a testament of her lengthy service, which Sen. West referred to in talking about the “dash between the time you are born and the time you go home.”