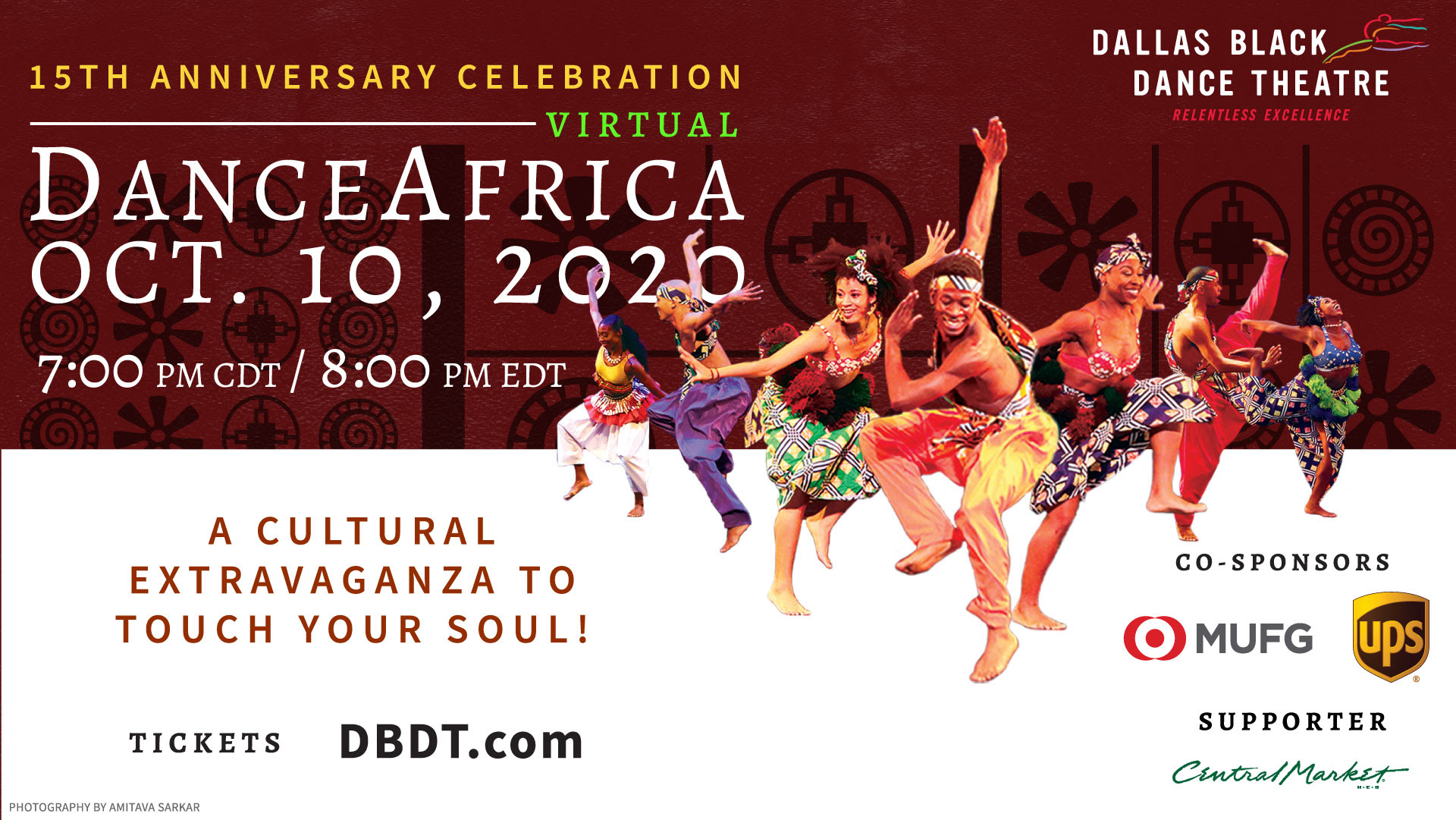 Dallas, TX – Dallas Black Dance Theatre (DBDT) celebrates the 15th Anniversary of DanceAfrica with a virtual cultural tradition to touch your soul. Washington, D.C. based Step Afrika! will make you move with the African American art of Stepping and Dallas’ Bandan Koro African Drum and Dance Ensemble will be featured as guest artists alongside DBDT, DBDT: Encore!, and DBDT academy ensembles. The dozens of dancers will be joined virtually by the award-winning DeSoto High School A Cappella Choir singing melodic and inspiring songs that capture the spirit of the African tradition.

DanceAfrica will make the Dallas Arts District their stage, performing in different outdoor venues of the district. DanceAfrica 2020 is co-sponsored by MUFG Union Bank and UPS and is also supported by Central Market.

Step Afrika! performed in Dallas during the 2018 DanceAfrica series for two sold-out shows. DFW area residents who could not get a seat to the performance in 2018 will now have the opportunity to experience a virtual performance. Step Afrika! Founder and Executive Director C. Brian Williams learned to step as a member of Alpha Phi Alpha Fraternity at Howard University in 1989. After living in Africa, he began to research stepping and discovered it draws movements from African dances.

Bandan Koro African Drum and Dance Ensemble spreads its mission throughout the DFW metroplex to foster a greater understanding and respect for African and African Diaspora related music, dance and culture.

A special treat will include performances by the DanceAfrica Elders and a Dallas Black Dance Theatre Choir.

To RSVP for a Zoom link and more details visit DBDT.com.

The annual outdoor DanceAfrica Marketplace and Festival will become a DanceAfrica Virtual Marketplace, October 1 through October 31, 2020. The vendors that used to have booths lined up outside in Annette Strauss Square, will now have virtual space on the Dallas Black Dance Theatre website.  People will be able to connect to vendor online stores directly from the DBDT website.

For details on becoming a virtual marketplace vendor visit https://dbdt.com/donations/danceafrica-vendor-application/

In lieu of the annual outdoor festival with arts and crafts stations for children, the virtual DanceAfrica is hosting an online African inspired KUUMBA (creativity) art contest. There will be three levels for kids, teens and adults. The three winners will receive a free link to the DanceAfrica performance and their artwork will be unveiled during the live virtual Saturday night performance, October 10, 2020.

ABOUT DALLAS BLACK DANCE THEATRE: Dallas Black Dance Theatre (DBDT) is an internationally recognized professional dance company that engages the cross-cultural community through contemporary modern dance presented from the African-American experience. The National Endowment for the Arts designated the 44-year-old company as an American Masterpiece Touring Artist in 2008. The company also received the Texas Medal of Arts Award for Arts Education in 2017. As Dallas’ oldest and largest professional dance company, DBDT ranks as the 10th largest minority arts organization in America and the fourth largest black dance company in the nation.

Ann Williams founded Dallas Black Dance Theatre in 1976. Melissa M. Young took over the helm as Artistic Director in 2018 after starting with the company as a dancer in 1994. Zenetta S. Drew has led the administrative side of the company since 1987 as Executive Director.

The mission of Dallas Black Dance Theatre is to create and produce contemporary modern dance at its highest level of artistic excellence through performances and educational programs that bridge cultures and reach diverse communities. The virtuosic dancers of Dallas Black Dance Theatre have mesmerized 4.3 million arts patrons across 16 countries, including two Olympic Cultural events.

Dallas Black Dance Academy, the official school of Dallas Black Dance Theatre, celebrates 47 years of delivering dance instruction to a community of diverse backgrounds. The academy was the first in the nation to train a student who received the Presidential Scholar Award in Dance in 1980. More than 500 students participate weekly in 50 dance classes, which include ballet, jazz, tap, modern, and African. Classes are held at DBDT’s studios and are open to students ages four to adult. The academy has three performing ensembles: Allegro Performing Ensemble, DBDT’s premier academy ensemble, Senior Performing Ensemble, and Junior Performing Ensemble.