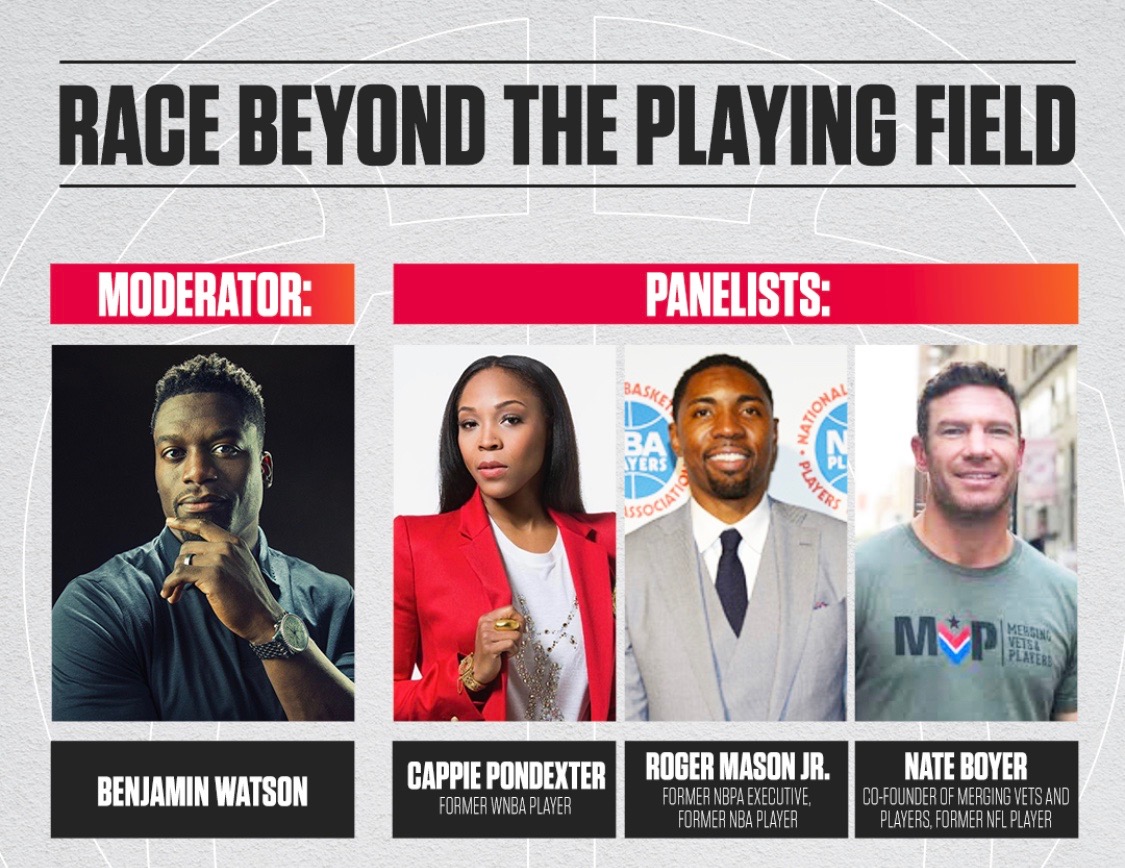 Athletes have always initiated change; from raising a Black Power fist in the air, tweeting out a petition to sign or kneeling on the field, to protecting the Vietnam War or wearing a Black Lives Matter T-shirt. The landscape of society has always brought different backgrounds together to bond over sports.

Former NBA, WNBA and NFL players hopped on a Zoom call recently to discuss how race is a factor not only on the field but off. The discussion was sponsored by the National Association of Black Journalists Sports Task Force, One Team and the NFL Players Association.

Benjamin Watson, former player with the New England Patriots and New Orleans Saints moderated the panel. He started off by saying, “athletes are always at the forefront of change.” George Floyd’s death shook everyone’s core and propelled communities to protest, Watson said.

Former WNBA great Cappie Pondexter was stunned when the George Floyd murder took center stage this summer. She said it took her two days to find the courage to stomach watching the video of Floyd.

“It’s time for change, I think this was the last straw for Americans, no matter if you’re black or white, it was just time,” said the former Indiana Fever star.

But this isn’t new to Pondexter. She was raised in Chicago “a very violent city” and has been dealing with racial issues for years. She recalls a moment that her 16-year-old cousin in Illinois was murdered. From this incident, Pondexter had a front-row seat of watching the social justice system unfold.

Nate Boyer, a former Green Beret and NFL player for the Seattle Seahawks, has seen a lot in his lifetime. In 2015, Boyer co-founded a program called Merging Vets and Players where he empowers former professional athletes and combat veterans on their next stage of their life.

For Boyer, Floyd’s death, the eight minutes, and 46-second video affected him and a lot of people that resemble him as a White man. “It was such an inhumane thing to watch,” he said. “Obviously it was a big turning point, a horrible thing that was necessary for us to witness.”

Although racism is seen more visible in the outside world, it’s totally different once an athlete steps inside a locker room. For Roger Mason Jr., who played for The New Orleans Pelicans and Miami Heat, noticed the dynamics of being in the locker room and outside are different. Mason understands that the real world and a team environment are not the same and a false reality. “When you’re hoopin’ you don’t see color,” he said. “You’re going out to battle…you have that empathy; you have that brotherhood.”

A lot of athletes realize that this is the case and utilize their platform as a way to continue the racial equality conversation. In 2014, former Clippers owner, Donald Sterling was banned for life from the NBA and fined $2.5 million for his racial outburst. Current and former players such as Magic Johnson spoke up and said his comments were out of line.

“Not only did the players have the guts to stand up for something bigger than themselves but you know the league supported that and got that team owner out of the NBA,” Mason said. “That was a real tipping point.”

With the restart of the NBA and WNBA, many players have been wearing BLM apparel or even bringing message statement items to the press conferences. For instance, Donovan Mitchell, a player for the Utah Jazz carried a bulletproof vest where it listed the names of victims who lost their lives at the hands of the police.

“Their brand is powerful enough to really make a difference,” Mason said. “They don’t need the media to speak for them.”

Pondexter realizes the world isn’t the same anymore especially because of the pandemic.

“With COVID and Black Lives Matter, it’s a lot for us emotionally, physically [and] spiritually,” she said.

Although equality might not happen tomorrow, it’s important to keep pouring into the next generation of leaders. She stresses the importance of young athletes to continue to educate themselves but also apply for scholarships.

“As leaders, we have to continue to push the youth,” she said. “To move the culture forward…it starts with education.”