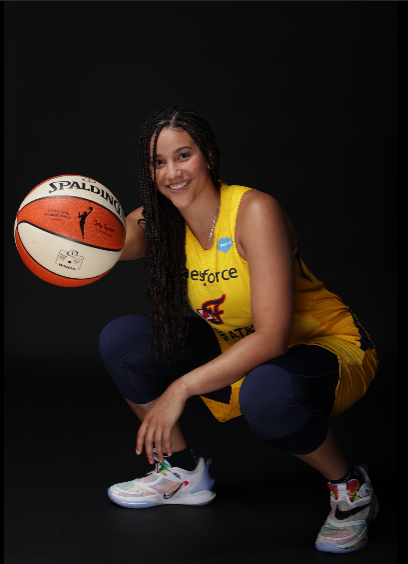 Last year when professional athletes, including Liz Cambage, DeMar DeRozan and Kevin Love began talking openly about their mental health struggles, WNBA player Natalie Achonwa began speaking at schools and other public events to encourage others to take care of their mental health. When the realities of racial injustice came to the forefront of society’s consciousness this summer, Achonwa took to the streets and engaged in voter registration drives and peaceful protests in Indianapolis. For these and other reasons, the Indiana Fever star was recently named winner of the WNBA’s Dawn Staley Community Leadership Award for outstanding leadership and commitment to the community.

The award, named in honor of WNBA legend and Hall of Famer Dawn Staley, recognizes a WNBA player who best exemplifies the characteristics of a leader in the community where she works or lives and focuses exclusively on a player’s activities during the offseason. Achonwa has worked against racial injustices and oppression, along with the stigma surrounding mental health. “It is important for me to optimize the benefits and privileges I receive from being a professional athlete,” Achonwa said. “A big piece of that is using the platform I’m awarded to connect with people, promote a level playing field, and inspire others to make positive change. “Through the ups and downs of my own personal journey, I have found that it is the little things that make the biggest difference,” she continued. “If we all focus on challenging the status quo of our own circles, and build from there, we can tackle the world and keep moving forward.

Throughout the offseason, Achonwa developed a way to stay emotionally connected to fans and the community with “Nat Chat,” where she interviewed other personalities in sports and discussed important initiatives such as mental health and racial injustices. Mostly recent, last month she joined Fever GM and Hall-of-Famer Tamika Catchings, NBA player George Hill and others in the Monumental March and the Voter Registration protest in Indianapolis. The WNBA will make a $10,000 donation to Madam Walker Legacy Center in Indianapolis on behalf of Achonwa.