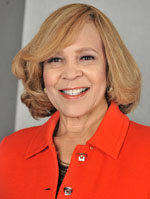 The emergence of the devastating COVID-19 crisis has forced every nation and people everywhere to recognize our interconnectedness. This Coronavirus pandemic has shifted the way we live, communicate, and do business. It has cost many people their livelihoods and, as of May 28, 2020, infected almost six million people globally. Still growing, the heart-breaking number of deaths is more than 350,000, to date. Indeed, all of us are left with an indelible mark and forced to actively adjust financially, psychologically, and emotionally. The impact would have been greater but for the dedication, courage, and resilience of so many. We all recognize COVID-19 is brutal and is challenging us in ways we never could have imagined in our lifetime. Although every ethnicity and demographic has been catastrophically affected by this disease, the elderly and people of color lead as the greatest impacted.

In addition, no population in the racial identity spectrum has been hit harder than African Americans, who make up 13.4 percent of the US citizenry. According to recent national reports, African Americans are dying at three times the rate of whites. While these numbers are greatly disturbing, they are, unfortunately, not entirely surprising. For some time now in Texas, we have been well aware of significant health disparities between Caucasians in contrast to African Americans and U.S. Hispanics. Perhaps not coincidentally, the legislative policies have a direct impact on the support that addresses those concerns.

In 1989, the late State Representative Fred Blair passed legislation to create the Council on Minority Health Affairs. This interagency committee held statewide hearings to gather information and bring attention to the discrepancies in health services between whites and people of color. Those hearings led Mr. Blair to the creation of the Texas Office of Minority Health. Although made with heroic stride, unfortunately, he was unable to obtain an appropriation to fund the office. In 1993, during my first year in the Texas Legislature, I picked up his mantle and successfully authored legislation funding the Office of Minority Health (OMH). Over the years, several legislators, most notably Representative Garnet Coleman and former State Representative, Dawnna Dukes, continued leading efforts to stabilize and strengthen the OMH. In 2017, partisanship ruled the day and legislators dismantled the Office. They, instead, chose to withhold funding and ignore the need to collect data that could lead to improving the health status of people of color.

It is time to honor the facts, reinstate funding, and reinvent the Office of Minority Health. A serious dissecting of the evidence will certainly reveal how lack of access to healthcare, socio, and economic inconsistency factor in the Covid-19 crisis; showing those most impacted by the virus are often uninsured or have inadequate coverage. An even more comprehensive analysis would not only show how difficult it is to manage diabetes, heart disease, high blood pressure, and other illnesses, but to do so without health insurance. Many African Americans who fell ill or died have poor working conditions and are essential/service workers who seldom have the option to work remotely. These individuals often work in crowded environments and rely on public transportation; where social distancing is difficult, inevitably increasing their risk of COVID-19 exposure.

There are a host of unanswered questions regarding the treatment of African Americans during this pandemic. Were African Americans insensitively turned away for testing and/or treatment? Are these experiences real? Did ambulances refuse to transport them? Questions like these are posed, as many credible research studies have validated that medical treatment for people of color is so often disproportionately different from that of whites who present the same symptoms. The multi-layered reminders mirroring the intent and devastation of the Tuskegee Syphilis Experiment conducted on African Americans by the United States Public Health Service from 1932 to 1972 ruminate in our hearts and minds.

At the surface, these issues may appear to be solely African American. But, they are the whole of American issues; they penetrate to the soul of who we are. Yes, Texas needs a healthy economy. Conversely, we need a full workforce that is robust, productive, and can not only get us there but allow us to thrive through the next level.

Maternal and infant mortality, diabetes, heart disease, and high blood pressure are only some illnesses that ravage the African American community as a byproduct. Social and economic imbalances and their effects–low-income worker conditions, a desert of nutritional foods availability that often creates reliance on fast foods, coupled with lack of transportation to get to medical appointments–must be addressed. Billions of dollars that should help to take care of Texans who suffer mild to severe health challenges are being unrightfully redirected to other states.

Governor Greg Abbott created the Supply Chain Strike Force to provide medical solutions to contain COVID-19. He similarly created a Strike Force for recommendations on reopening the economy. To implement a Governor-appointed task force for more all-encompassing healthcare and truly bring balance to health incongruity could make a significant difference in the advancement of Texas. Wise and nonpartisan leadership is the portal for which true change can occur. There is a great need to address the bias that hinders wholesome patient and provider engagement for everyone. Accountability is essential. Communication is crucial. Action towards a structure that acknowledges the breadth of humanity as an undeniable oneness, while simultaneously embracing the importance of properly dispersing resources accordingly, would just make good sense. What do you say…Governor?

Helen Giddings is a former Texas legislator representing southern Dallas and DeSoto in the Texas House. She is also a successful entrepreneur and the founder of an empowering conference called the Women’s Leadership Summit (WLS).