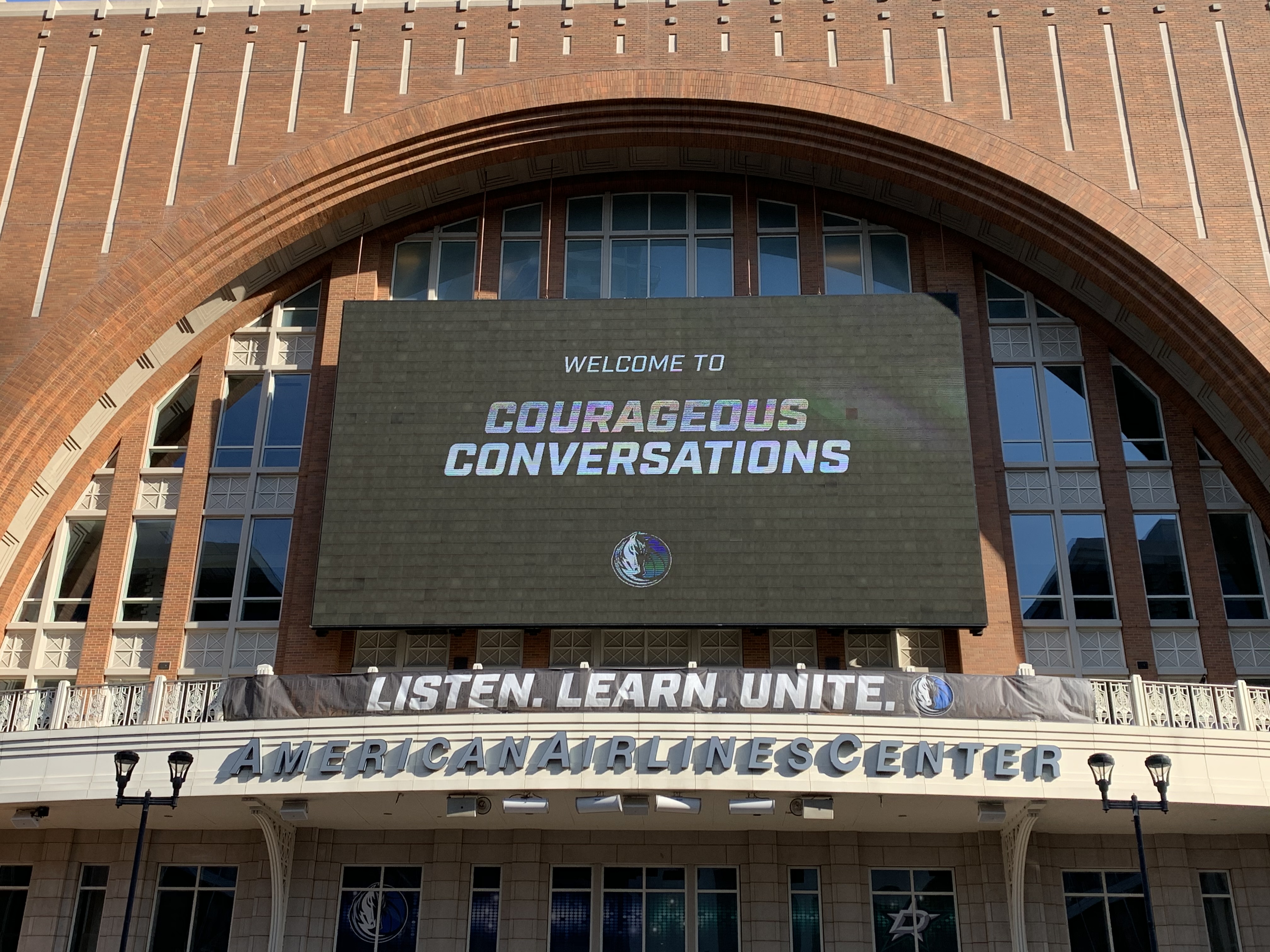 Former NBA star Sam Perkins recently said what every black person in America has thought or said numerous  times in the past two weeks since unarmed black man George Floyd was killed by white Minneapolis police officer Derek Chauvin, who held his knee to Floyd’s neck for eight minutes and 46 seconds.

“Thank goodness there’s video cams now. But think about all the times when people didn’t have video cams and they were somewhere at night on the road somewhere and you just don’t know what happened,” Perkins said.

“And you have to take the story of the officer or the person in charge or the sheriff or somebody.”

Perkins was one of several speakers and panelists at “Courageous Conversations,” a 90-minute outdoor event sponsored by Mavs owner Mark Cuban, CEO Cynt Marshall and the Dallas Mavericks in response to the Floyd murder, the subsequent racial unrest and protests nationwide, and to discuss the systemic racism and disparities facing the African American community

The event, held on Victory Plaza outside of the American Airlines Center, was the brainchild of Marshall and had as its overall goal: Listen. Learn. Unite.

“A lot of things come to me in my prayer closet. And so I was just praying about this whole situation, and I’ve been talking to my boss and we’ve been having conversations,” she said, explaining how the idea formed. “I know from experience we have to talk. We have to try to get people to listen and learn and then bring them together.

“I was praying about what can we do. I talked to Mark and we just decided we’re going to bring the community together, so that’s what we wanted to do,” Marshall said. “I’m just glad people came out today and learned some things and heard each other’s stories. We’re going to make a difference.”

The three “conversations” for the day: a panel on Reactions to the George Floyd Murder, small-group sessions for the “Welcome to My World” Experience, and a closing panel discussing “Where Are We Now and Where Do We Go From Here?”

Cuban kicked off the conversation by posing a question to the audience. After sharing that President Trump was born in 1946 and became eligible to vote in 1964, he asked, “What year did black women get the right to vote?”

Several people shouted out answers but none chose correctly.

He then offered a plea: “I need all of us to really open up and talk to each other, even when it’s difficult. Even when it’s not something we’re comfortable with, particularly those of you who look like me, the white community because it’s hard to discuss race when you’re white.

“When people talk about white privilege, we get defensive. We’ll say: ‘Well, I have a lot of black friends. I can’t possibly be someone that takes advantage of white privilege.’ And it’s incumbent upon us to stop doing that because that doesn’t move us forward when we do that. And that’s part of having a courageous conversation. That’s what we’re here for today.”

“There are 800,000 law enforcement officers, men and women, in this country,” she said. “And we all watched one of our own put a knee on a Black man’s neck with no regard for human life, with no empathy, wearing the same uniform we wear, upholding the same laws we uphold.

“And it made us all sick to our stomach. So we recognize there is work to do. If we are truly going to fix the problems in our agencies, we have to have robust systems that allow us to identify those individuals whose actions perpetuate the behavior we saw on May 25th.

We have to have a system in place that allows us to dismiss officers from our police departments and not have civil service boards bring them back. After we decide these individuals do not belong in our agencies, we need them to stay gone.”

A break-out session titled “Welcome to My World” featured diverse small groups of participants sharing their stories and stereotypes related to race and race relations.

The event ended with the playing of “Lean on Me” by Bill Withers as all knelt down on one knee.

Mavs General Manager Donnie Nelson believes the event is just a start to heal the pain felt by all.

“I’m in pain, my family’s in pain, the team’s in pain, our country’s in pain and these are long overdue discussions and conversations,” he said.

“Let’s use this as a platform to get better individually, as an organization and as a nation. Some of the stories we’ve heard in house, not to mention the obvious travesties that have happened, have put a new spotlight on things.

“This could be an incredible time for our country.”