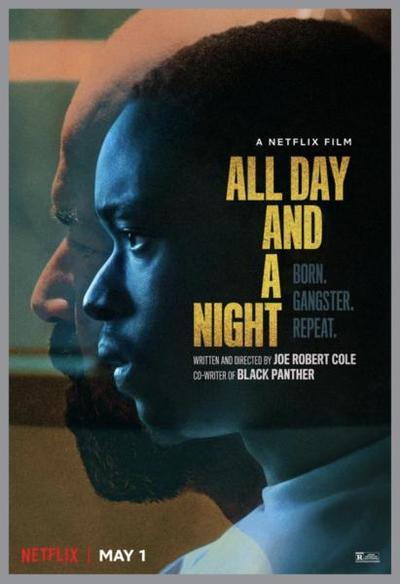 In the movie All Day and a Night, Ashton Sanders (Moonlight) plays Jahkor Abraham Lincoln. He struggles to keep his dream of being a rapper alive; however, instead, he follows in the footsteps of his abusive father in the middle of a gang war in Oakland. He ends up in prison alongside his father. His life as a drug dealer and real-world responsibilities with a young pregnant girlfriend drive him further and further across the line of right and wrong with tragic consequences.

Landing in prison beside his father, J.D. (Jeffrey Wright, Westworld) whom he never wanted to be like, Jahkor embarks on an unlikely journey of self-discovery, exploring the events that unite them, in hopes of helping his newborn son break a cycle that feels unavoidable. The young want-to-be rapper has a baby and the boy seems doomed to follow the family’s legacy of a life behind bars and a life of crime.

All Day and a Night is a powerful film and gripping tale written and directed by Black Panther co-writer Joe Robert Cole. In Cole’s directorial debut, he crafts a story about the cycle that affects many young men of color who have limited options to provide for their family and break the cycle of poverty. Ashton Sanders does an excellent job playing a character that has a lot of love for his family; however, he is also a brutal killer who lands in jail.

The drama co-stars Isaiah John (Snowfall), Kelly Jenrette (The Handmaid’s Tale), Shakira Ja’nai Paye (Spider-Man: Into the Spider-Verse), Regina Taylor (The Unit), Christopher Meyer (The Affair), and Yahya Abdul Mateen from Watchmen. All Day and a Night is a tragic story of a son following his father’s life of crime. It’s a story told with a very dark undertone that will affect you.

The movie is rated R for violence and has a run time of 2 hours. On my “Hollywood Popcorn Scale,” I rate this movie a LARGE.