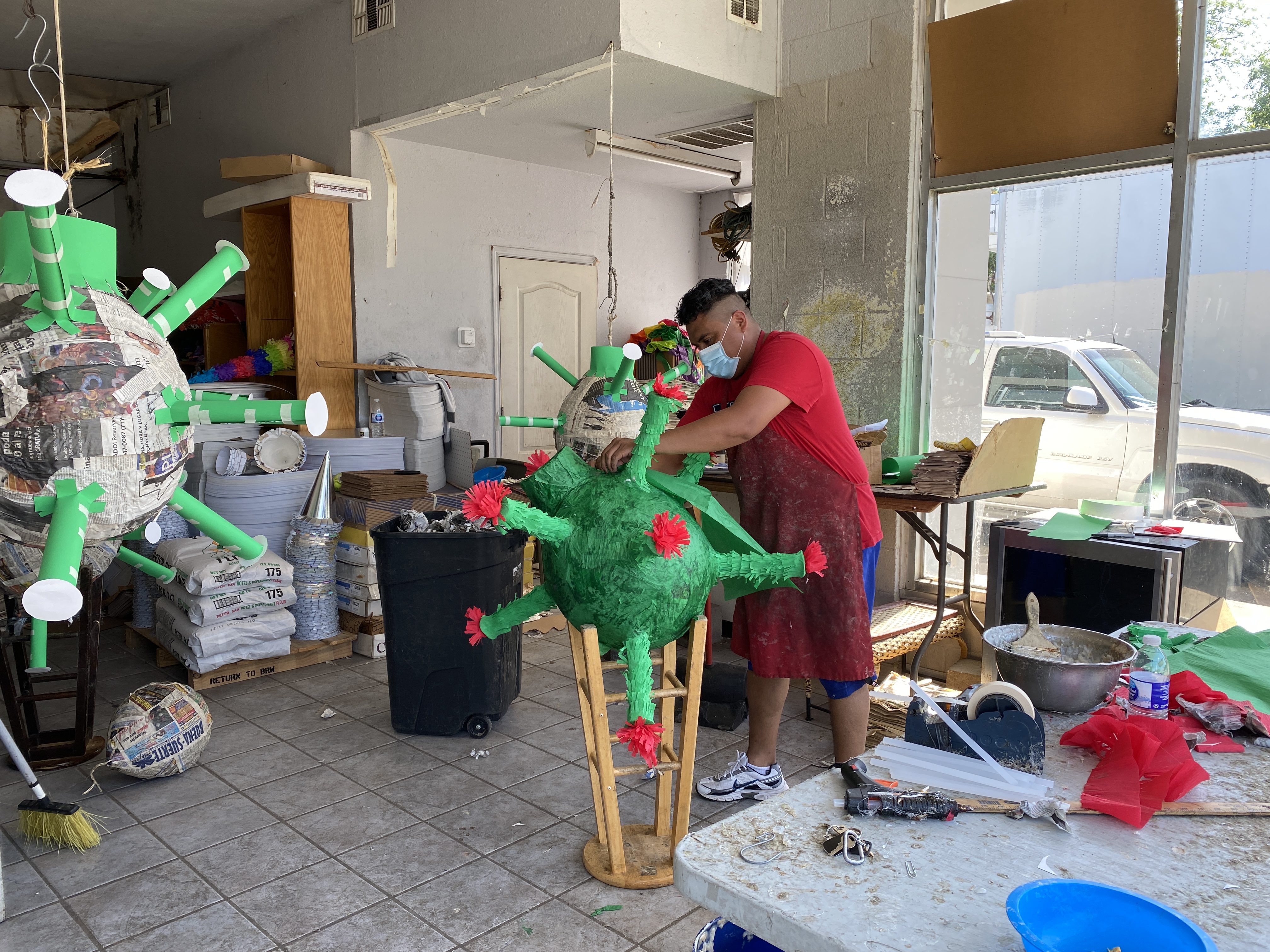 Tonya Pryor and her friend were driving down West Davis Street in Oak Cliff on Saturday when something green caught their attention. Huge coronavirus piñatas were swinging in the wind, hanging outside ABC Party headquarters. Pryor said she had to get a photo. “I love them! We were on our way to the park because we live around here,” she said. “We were driving by and saw them, and we said those are coronavirus piñatas!”

Store owners Carlos and Elvie De La Fuente knew a coronavirus piñata was going to be a big hit because they figured people needed something to help them get their frustrations out after being cooped up at home because of COVID-19. “They are doing awesome. People are ordering them left and right, and we can’t even keep up trying to get them done,” said Elvie De La Fuente.

The big green piñatas are designed for any occasion and sell for $55 each. “We even have some with caps or any event that you want. We can dress it up however you like so you can take out your frustrations out on the piñata because we’re going to beat it! And we’re going to beat it with a piñata stick!” said Carlos De La Fuente. Alejandro Sagrero is the piñata maker at ABC Party. He works in a room surrounded by windows so people can watch him make the big coronavirus piñatas.

He works fast, quickly ripping pieces of green tissue paper, slapping the glue on with a brush, and placing the tissue on a balloon paper machéd in a newspaper. He uses a stool set upside down as the holder for the piñata in the making. “I think the people who buy these like to have fun and beat the pandemic out of them. I would if I had one,” said Sagrero, in Spanish, adding that it takes half an hour to make one piñata, and he usually makes 12 a day.

The coronavirus piñata has been the financial boost ABC Party headquarters needed. Owners lost money when they closed the store in March because of the state’s COVID-19 restrictions. The piñata maker and another employee were laid off. When Texas Governor Gregg Abbott said businesses could reopen May 1st with 25% capacity, De La Fuente knew it was time to make up for lost profits. He called Sagrero and his other employee to return to work. De La Fuente said he believes his business survived because his customers cared.

“It has been great. The public has supported us, the community is always behind us,” said De La Fuente. ABC Party Headquarters is known for its creative piñatas. In 2016, it got national media attention when it sold big piñatas in the image of Presidential candidate Donald Trump. Owners sold several hundred Trump piñatas for $75 each. Not only were local sales good, but they shipped Trump piñatas to customers around the country. De La Fuente believes the coronavirus piñata may be a bigger seller than the Trump one.

Laura McFerrin stopped by to get her coronavirus piñata. She got a Trump piñata last time, and this time she said she had to get her hands on the green piñata because it puts a smile on her face that’s covered with a face mask. “It’s hilarious,” she said. “One of my neighbors is having a party. I thought I’d fill it with some candy and give it to her so she can hit it.” She also grabbed another Trump piñata on the way out. After taking a few photos of the coronavirus and Trump piñatas, Pryor left feeling good. “I’m excited. I think it’s hilarious. It’s much-needed at this time.”