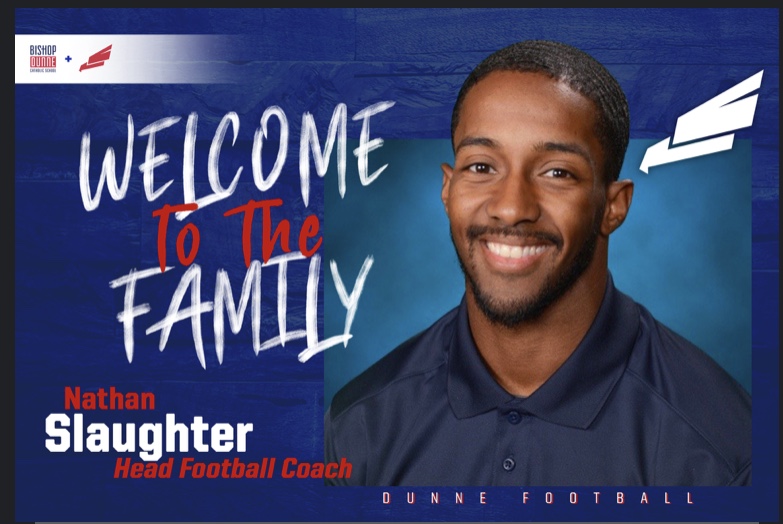 “I have spent the majority of my life dedicated to the sport of football, as a professional athlete, coach and mentor. My mission is to engage, inspire, influence and impact student athletes academically, athletically, socially and spiritually, helping them develop and perform as highly as possible,” said Coach Slaughter.

Coach Slaughter is a former professional football player who was a wide receiver for the Houston Texans, Jacksonville Jaguars and Arizona Cardinals.

“We are excited to welcome Coach Slaughter,” said Dunne Principal Mary Beth Marchiony. “He is a talented, inspiring coach who brings enthusiasm and expertise to our students. Bishop Dunne looks forward to him joining our team and to an exciting year of football.”

Coach Slaughter graduated with a degree in Mass Communications from West Texas A&M, earning All-American honors on the field and in the classroom.

He takes over as head coach after Michael Johnson, the long-time beloved and popular head football coach was let go in January amidst a restructuring of the school’s athletic department that was announced in a letter to parents.

Johnson, a two-time TAPPS (Texas Association of Private and Parochial Schools) state championship coach, started coaching and teaching at Dunne in 2005 after he graduated from the school. He became head coach in 2009, finishing with a 73-58 record and two TAPPS Division 1 state championships in 2014 and 2018.