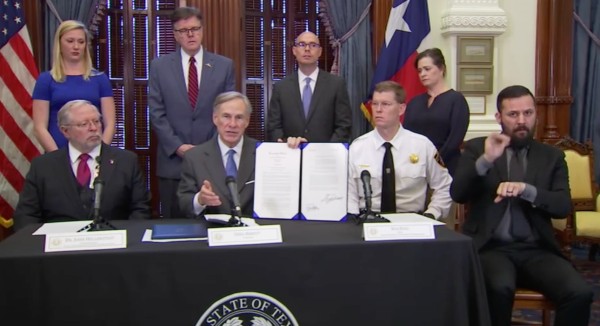 Texas Governor Greg Abbott took measures Thursday to bring the state of Texas in line with the Center for Disease Control and Prevention (CDC) to prevent the spread of the coronavirus, also known as COVID-19. At a news conference at the State Capitol, Abbott announced an executive order that will temporarily close gyms, bars, and dine-in sections at restaurants statewide. The order also limits social gatherings to only ten people. “We have to get back to business as usual as quickly as possible. We can only do that by everybody joining with us,” said Abbott.

The executive order took effect at midnight Friday, March 20, and will end on Friday, April 3, at midnight. Still, it could be extended depending on the number of coronavirus cases in the state. Although restaurants cannot offer dine-in services, Abbott said the businesses could sell food and alcoholic drinks through take-out. “Use of drive-thru, pick up or delivery options are allowed, and in fact highly encouraged throughout the limited duration of this executive order,” added Abbott.

People are banned from visiting nursing homes except those in critical care. Many nursing homes and senior living facilities in Dallas took these measures earlier when the CDC issued its guidelines.

Schools in Texas will be closed until April 3 under the executive order, but the Governor encourages schools to continue educating students. “But this does not mean that education stops; instead superintendents should continue to work with the Texas Education Agency to continue online or additional educational options.”

State Health Commissioner John Hellerstedt also declared a Public Health Disaster, which gives state and local officials additional tools to respond to coronavirus. The declaration provides the state officials the ability to put everyone under quarantine, but Governor Abbott hopes that will not have to happen. “We want to depend on the responsibility that all Texans will show. If Texans are irresponsible in their behavior, there are more tools where we can be aggressive only if needed.”

Abbott said Texans can still conduct regular business like banking and grocery store shopping. He advised businesses to remain open, but should only use essential employees and allow other workers to do their jobs remotely.

Up until March 19, the Governor had left the issue of dealing with the spread of the COVID-19 to local city officials. Many of the stricter measures were adopted by Dallas County the week before.