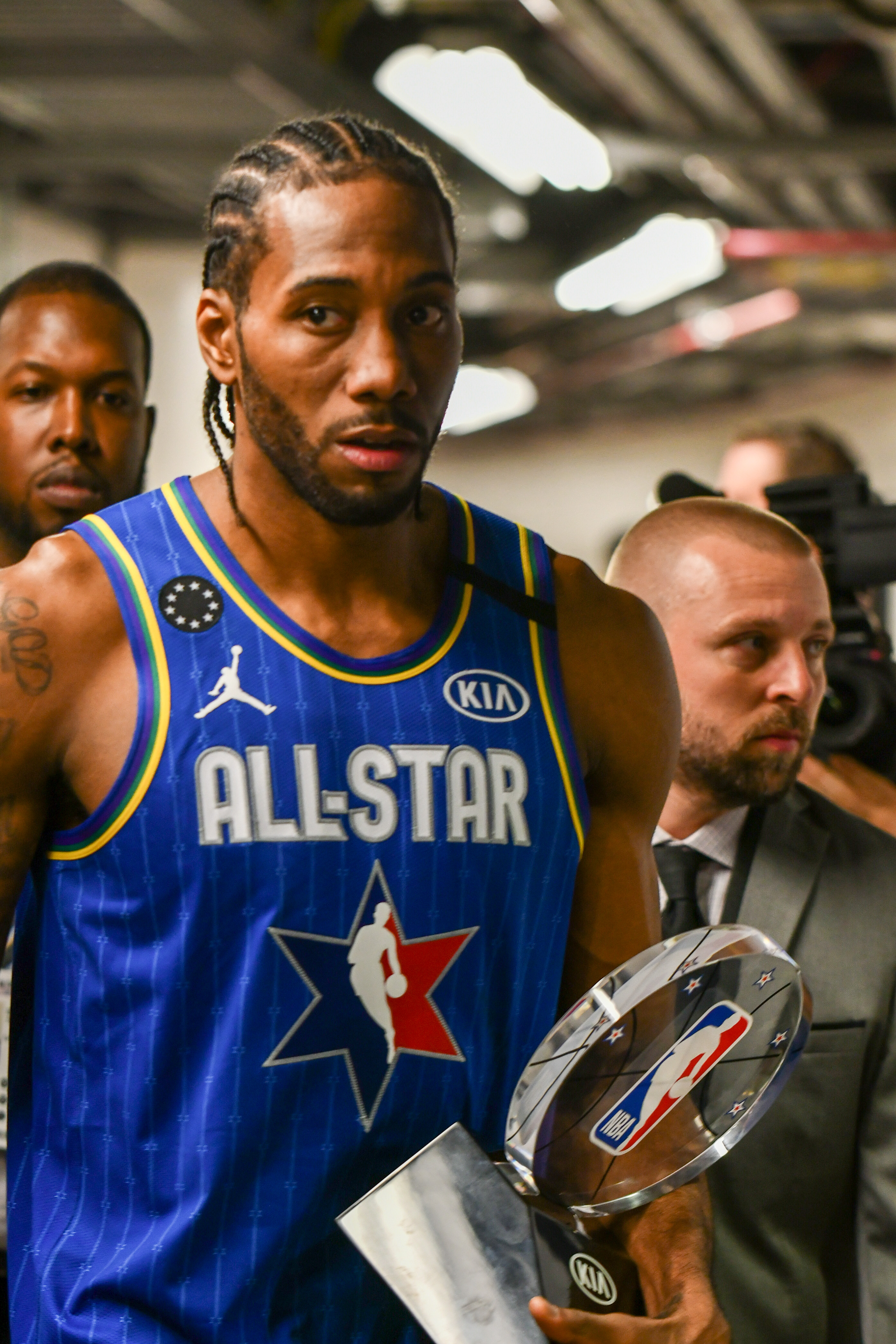 NBA Commissioner Adam Silver announced on Feb. 15 that the All-Star MVP would be renamed the Kobe Bryant MVP Award.
The trophy [was] presented at the conclusion of [the] game, Silver said, “and I know it will be especially meaningful to the player that wins the first Kobe Bryant MVP.” Silver made the announcement during his State of the NBA address, held annually during the NBA All-Star Weekend. This year’s event was held in Chicago.

“This seems so appropriate here at All-Star because nobody embodied All-Star more than Kobe Bryant. “ Bryant, his 13-year-old daughter Gigi and seven others were killed in a helicopter crash last month.

“We were thinking about what the best way is, one of the ways, to honor Kobe,” Silver said. “It happened to be that his loss came shortly before we were moving into All-Star festivities. I think one of the things that stands out with Kobe, of course in addition to his five championships, is that he has the all-time record of 18 consecutive All-Stars and tied for the record of four MVPs.”

“So we were thinking what is something special we could do at All-Star that had more permanence than changing the numbers on the jerseys and this was it.”

The players also wore the Number 24 in honor of Bryant’s number he wore for 20 years with the Los Angeles Lakers or No. 2 in honor of his daughter who also played basketball as part of Mamba Academy.

Last NBA season no one really knew who Bam Adebayo was. He walked around NBA All-Star Weekend 2019 in Charlotte, South Carolina a relative unknown. Very few asked for his autograph as he made the rounds of the Spectrum Center, all smiles as usual.

What a difference a year makes; the almost 7-foot center/power forward now has a growing household name, is a key part of the surprising Miami Heat, who are in fourth place in the Eastern Conference and last week won the Taco Bell Skills Challenge at  NBA All-Star Weekend in Chicago.

The 22-year-old from Newark, New Jersey, was all smiles when he talked with the media shortly after winning the three-round, bracket-style contest where players compete head-to-head in an obstacle course featuring checkpoints that test their dribbling, passing and shooting.

When asked if he thought he would win the event he said he actually did for one key reason: he was on his “favorite side.”

Adebayo said he would dedicate and give his trophy to his mom who was present that night. “She might cry because it’s a big deal. This isn’t something that you just pass along. It’s because all she’s been through and all the struggles she’s been through and what the living conditions I had to go through and how she still strived to make me happy and make our house feel home,” he said.

“I can’t do nothing but give her that and keep giving her every other accolade I get.”

Adebayo said he understands that while people in Miami know him and the rest of the country is learning about him, he didn’t see All-Star Weekend as a breakout weekend for him.

“I don’t think it’s a breakout weekend. I think it’s more of a breakout season for me,” he said. “I don’t discredit what I did before the All-Star break. I feel like I deserve to be here, and just being here and proving that I just got another accolade is putting more people on notice.”

Adebayo also reflected on Kobe Bryant who was honored during All-Star Weekend in many ways, including players wearing No. 24 and No. 2 for him and his daughter Gigi.

“When I was in high school, I said if I get to the NBA, I want to meet Kobe. I feel like this is my All-Star to do it. I feel like he’s been more of an impact now than he was back then. Not saying that him living didn’t do anything for me, but it just means more now that I know I can never meet him,” he said.

“I feel like he knows who I am now. So I will just keep trying to make him proud.”

All-Star Saturday Night is easily the most-hyped, most-attended and favorite of the NBA All-Star festivities. All-StarSaturday night in Chicago was no exception as fans and the audience were witnesses to great
competition, fantastic performances and an epic dunk battle that will go down in history as one of the best ever.

The Slam Dunk Contest – everyone’s favorite event – featured Orlando Magic player Aaron Gordon and Derrick Jones Jr. of the Miami Heat both former runners-up in the battle. They tied after both the finals
and the tiebreaker round and had to keep on dunking in what was essentially the first OT in the event. Finally, despite Gordon dunking over 7-foot-5 Boston Celtic player Tacko Fall, Jones was named the Slam Dunk Champion.

“It feels great,” Jones Jr. said of winning the competition on what was also his 23rd birthday. “Just being able to get an achievement like this on a day like this, it’s special for me. This is a day that I’m going to tell my kids about. Just make sure that they know this is a day for me.”

Before the Dunk Contest, All-Star Saturday Night opened with the Skill Challenge; a three-round, bracket-style contest where players compete head-to-head in an obstacle course featuring checkpoints that test their dribbling, passing and shooting. The finals of the competition featured the Miami Heat’s Bam Adebayo and Domantas Sabonis of the Indiana Pacers. Adebayo was named Skills Challenge winner. He dedicated the award to his mom.

Another favorite of All-Star Saturday Night is the 3-Point Contest. Last year’s champion Joe Harris of the Brooklyn Nets competed along with seven other players. Davis Bertans of the Washington Wizards, Devin Booker of the Phoenix Suns and Buddy Hield of the Sacramento Kings, reached the final round. Booker put a strong score of 26 up on the board in his final run through the course but Hield was able to make his final shot which gave him 27 points to beat Booker.

“I feel great. Like I said earlier, as a shooter, this is on your bucket list. You have to come in, and you want to win a three-point shootout. With a stacked field like that, it makes it even better. Pressure is on and you’ve got to show up.”

Kawhi Leonard and the late Kobe Bryant were friends.

And for Kawhi to win the first ever Kobe Bryant MVP Award in the 2020 NBA All-Star Game made winning the award that much more special.

“It’s very special. Like I said, I had a relationship with him. Words can’t explain how happy I am for it,” Leonard said shortly after winning the award. “I’m able to put that trophy in my room, in my trophy room, and just be able to see Kobe’s name on there, it just means a lot to me.

“He’s a big inspiration in my life. He did a lot for me.”

Leonard, who won the NBA championship last year as a member of the Toronto Raptors, is now with the Los Angeles Clippers. He won the MVP award after leading Team LeBron to a 157-155 victory over Team Giannis. He received seven of 12 possible votes from a nine-member media panel and NBA fans, who counted for three votes by voting via NBA.com, SMS and Twitter.

The final voting totals included LeBron James: 3 votes; Anthony Davis: 1 vote and Chris Paul: 1 vote Leonard said he carries Kobe’s legendary “Mamba Mentality” into everything he does but even more so now since his death.

“I pretty much carry that every year, you know what I mean? I’m going to play hard. That’s what I do. I want to go in and win every game. Whatever happens, happens from there. I would dedicate anything to him.”

Leonard said he didn’t enter the game with the goal of taking home the MVP Award but once he got going, he wanted it.

“I didn’t come in the game saying, I’m going to take that trophy home. I think I came in and made my first two shots and kept shooting and made shots. That’s when I told myself I’m going to go try to get it.”