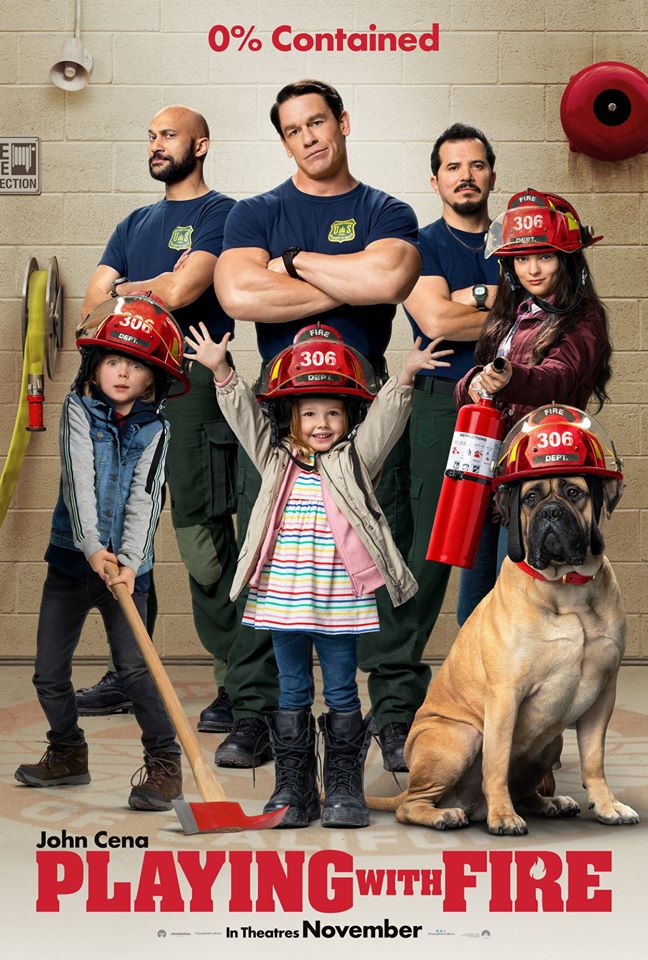 Playing With Fire is a family comedy starring John Cena; however, he plays the straight man to Keegan Michael Key, John Leguizamo, and the three adorable kids that Jake, the smokejumper, rescues from a burning house. The three kids are awaiting their parents to come for them forcing the entire firehouse crew to become babysitters for the mischievous children.

Spoiler alert: The kids are on the run since their parents died and they will be placed in separate homes forcing Jake to call CPS. Including a character named “Axe,” played by Tyler Mane, the four rugged smokejumpers are absolutely clueless about what it takes to care for three children between the ages of a toddler to a teenager.

There’s also vicious firehouse watchdog, Masher, which Zoey, Finley Rose Slater, immediately turns into a pet, shocking the entire firehouse crew. The movie works on multiple levels with everything from the kid’s hilarious escapades, to a little romance and action. Playing With Fire is not one of those kid movies that will keep parents bored out of their minds.

It’s actually a fun movie that has something for everyone. The best part of the movie is the message that you don’t have to be related to be a family. There’s love between the crew in the firehouse, which all have a deep respect for their leader Jake, for an environmental scientist, Patty, played by Lynda Boyd and of course the deep affection they all feel for the three kids that they are now caregivers of.

Playing With Fire is rated PG with a run time of 1 hour and 36 minutes. It’s a great “Family Comedy” that will be enjoyed by everyone in your house. On my “Hollywood Popcorn Scale” I give Playing With Fire a JUMBO