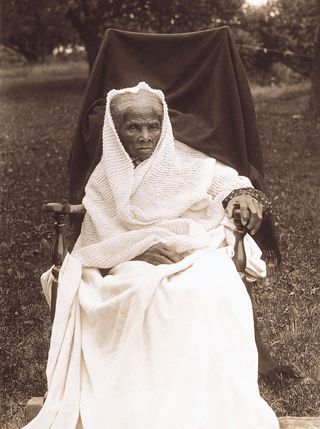 I’m pretty possessive about Harriet – the women. Always have been. I have not seen Harriet, the movie – yet. But I plan to, when I get over my jealousy.

You see, Harriet Tubman belongs to me. At least, she always has in my mind. This towering figure of strength, tenacity and endurance, gutter smarts, and almost superhuman achievement has been my secret North Star since I was a clueless little Black girl in a South Dallas grade school. I did not tell many people about Harriet.

I did not want to share. Now, I have to share, like it or not. You see my heroine Harriet, the woman is getting her due attention, at least a better portion of it, through the movie whose title is simply her name.

But know this, my esteem for Harriet does not diminish my immense regard for my other heroine – Ida B. Wells-Barnett, the great crusading Black journalist. Ida inspired my profession and motives. Harriet – the woman inspired the essence of my being.

Yes, I’m jealous to share Harriet – the woman; and at the same time, thrilled that she is getting overdue acclaim.

But I was just thinking…Harriet, the woman deserves so much more glory. Like fulfilling the elusive federal promise to put her face on the $20 bill.

The Feds promised in 2016 to substitute her face for Andrew Jackson’s by the year 2020. Then, the Trump administration reneged and with blatant reluctance and glaring lack of enthusiasm said the change would come nearly 10 years down the road – around 2028.

Harriet – the woman, though, would be used to the snub and would handle it were she here. She handled tons more grief than a government entity could shovel out and she kept on going. If you have not read her life story, I beg you to do so.

The woman born into slavery escaped, became an abolitionist, and helped the Union Army as a scout and spy. Called the Moses of her people, she returned to the South numerous times and led countless enslaved African descendants from slavery to freedom in the north via the seemingly divinely protected Undergrown Railroad.

I say countless enslaved descendants because conflicting researchers put the number as low as 70 to as high as 1,000. Researchers also disagree over whether Harriet actually said the following quote, as good a quote as it is: “I freed a thousand slaves.

I could have freed a thousand more if only they knew they were slaves.” Today, “woke” listeners would correct whoever said these words, changing “slaves” to “enslaved.” There’s a difference. Still, I was just thinking…..

History has run such a number on our people. We have to take everything we read with a grain of salt. In recent years we are being told that the Statue of Liberty originally was a gift from France to America celebrating, not immigrants, but Abraham Lincoln and the end of slavery.

Look at the nicely concealed broken shackles on Lady Liberty’s feet and read two books – one by Professor Ed Berenson, the other by engineer Yasmin Sabina Khan – explaining the shackles, Lincoln and ending slavery.

And speaking of books, two much-cited documents about Harriet’s life should help novice inquirers to know her better. Try either one of two books about Tubman by Sarah H. Bradford written in the 1800s and a third that Tubman scholar Kate Clifford Larson published in 2003.

I’ll leave you to research them. And the recent film, Harriet, although acclaimed, is getting its own share of heat from various haters. Some who wanted an African American rather than Cynthia Erivo, a Black Brit of Nigerian descent, to play the lead role.

Others were unhappy about deals they wanted to make with the filmmakers or unhappy about some behind-the-scenes political stances. Someone is always unhappy. But I was just thinking…I must say Goodbye. I need to go see a movie.