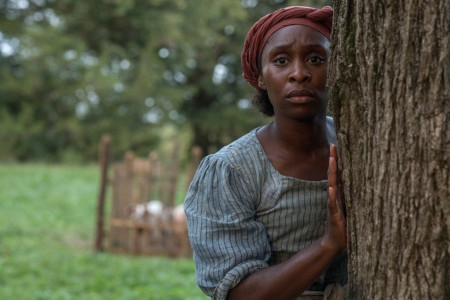 Any kid who took high school history is aware of the iconic character in Black History known as Harriet Tubman, but the movie Harriet takes us into the life of the abolitionist and teaches us about the woman, Harriet Tubman. She had almost superhero-type powers.

First, she freed herself with a 100-mile journey to Philadelphia, then she made the trip 10 more times over a 13-year period, freeing family members, friends and other enslaved American Blacks who wanted to be free as well. In total, she personally led over 70 slaves to freedom. She had a strong faith and an even stronger desire to be free.

With her Christian background, she believed that no man should be able to own another human being. It was that strong faith that gave her her relentless spirit to free fellow slaves and leads them to freedom. The movie shows her tragedies and her ability to triumph over the impossible obstacles that she faced. There’s a scene in the movie where she jumps into a river from off a bridge where she tells her master that she would rather be dead than to not be free.

She had an amazing spirit. She had a lifetime of historic firsts, such as being the first army commander to lead a group of American soldiers in battle. Tubman also started out as a person who used safe houses to help slaves travel to freedom in the north to become the conductor of the Underground Railroad. Harriet isn’t a “Black story.” It’s a story about a woman who was a true hero. It’s an inspiring and uplifting story about a woman who never gave up, no matter what the odds.

This is a story for all Americans. In her later years, Tubman worked with Susan B. Anthony on issues involving women. She also established a nursing home where former slaves could get free medical care. She was an amazing woman who lived to be 91 years old. The movie is rated PG-13 for violence and has a run time of 2 hours and 5 minutes. On my “Hollywood Popcorn Scale” I rate Harriet a JUMBO.