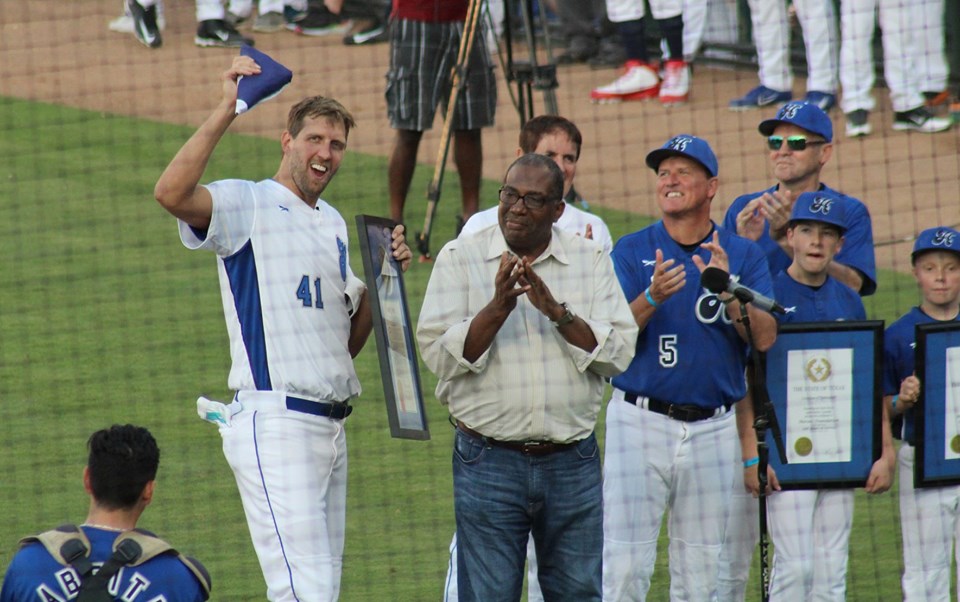 “It’s that time of the year again, and I’m excited. It’s my first one as a retired guy,” Dirk Nowitzki said as he opened the 2019 Heroes Celebrity Baseball Game at Dr. Pepper Ballpark in Frisco. “It feels good. I haven’t worked out in two months. But I’m excited to be here.”

The “here” he referred to is the 18th annual event – hosted personally the past eight by Nowitzki – which brings together celebrities from different sports playing baseball to benefit charities. Money raised benefits the children’s charities of the Dirk Nowitzki Foundation and the Heroes Foundation. A sellout crowd of 11,741 watched the Blue Sox defeat Nowitzki’s White Sox, 17-10. Dallas Cowboys running back Zeke Elliott was named MVP.

“This is my 8th year and 18th overall,” Nowitzki said. “It’s crazy how time flies. It feels like it’s growing every year. This year, we were literally within in the first two days (of announcing) and we had over 6,000 tickets sold. “It’s almost like this game is now part of the community,” he continued. “And we obviously appreciate the support from all the celebs participating, the media promoting it and the fans for showing up in a big way. This has been a fantastic event.” Cowboys quarterback Dak Prescott, participating for a second consecutive year, said he was honored to participate. “It’s an honor to be associated with and participate in an amazing event like this. You look around at all of these — not only great athletes but great men up here is wonderful,” he said. “Just to be associated with them for a great cause and raising a lot of money, it’s just an honor and something I look forward to being a part of for a long time.”

So why has this game been so successful? Morgan Stanley’s Charles McKinney, the event co-founder, asked, “The people that play and the fact that it’s a baseball game, not a softball game. Because everybody likes to see bad baseball by these guys, right?”