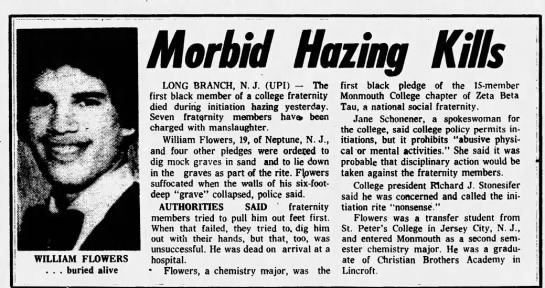 From the time your son is born—or before—you imagine his life path. From preschool to college, marriage, and the birth of his own children, you picture it all—it’s normal, it’s natural, it’s the cycle of life.

You survive sleepless nights, diaper rashes, ear infections, Cub Scout field trips, Little League scrapes, puppy love and S.A.T.s. You manage to balance the exhilaration and anxiety of selecting a college while shopping for clothes and dorm room supplies for their Freshman year. It never occurs to you that your boy may be headed for doom in that dorm in the pursuit of his dangerous degree.

You did it! You protected him from the streets and bad influences. He was fortunate enough not to have encountered the “wrong arm” of the law. His teenage girlfriend has born you no grandchildren. Again, you did it—God is good!

Perhaps he’ll be the first or maybe second or third-generation Greek, member of one of the Black Greek Letter Organizations: Alpha Phi Alpha, Kappa Alpha Psi, Omega Psi Phi, Phi Beta Sigma, Iota Phi Theta, or even one of the white fraternities; but pledging is not merely an option, it’s a certainty—it’s tradition for many. Horror stories about hazing cause you no angst or concern because numerous incidents, some fatal, have led to chapter sanctions, and laws protecting your child from danger.

Then, you get the phone call! Your child has been drugged senseless and subjected to a brutal beating, all in the name of lasting friendships, brotherhood and tradition. A Jacksonville mom and dad received that call. Their son, a senior due to graduate next month from a local HBCU, fell victim to hazing.

Where do they find answers? Who will be held accountable? Who will provide comfort and assurances that they did nothing wrong—their child did nothing wrong? Will there be justice for their son who’s been inflicted with physical wounds, and psychological and emotional scars that will most likely last the rest of his life?

College administrations are not designed for comforting or assurances that may expose them to liability that may cost them dearly in funding and perhaps their accreditation. Fraternities and sororities are structured in much the same way. The Greek Wall of Silence must protect the organization—tradition must be protected.

What is hazing? The dictionary defines hazing as, “humiliating and sometimes dangerous initiation rituals, especially as imposed on college students seeking membership to a fraternity or sorority.” Hazing can involve forced activities ranging from binge-drinking and “sexual-shaming” to dangerous levels of sleep-deprivation.

Actually, it’s a form of organized “bullying.” Sororities have been reported to have coerced female pledgees into group sex and forced prostitution.

Surprisingly, there’s a category called, Occupational Hazing including groups ranging from ship workers to nurses. In addition to taking an oath, new prospects may be forced to intake life-threatening levels of alcohol, take a beating, or in the case of some street gangs, take a human life to gain membership!

Hazing is not a new phenomenon—it’s been practiced here in America since the late 18th Century, as well as by various cultures and civilizations around the world. Misconceptions regarding hazing include the notions that it builds character, promotes courage and instills loyalty. One of the biggest problems with campus hazing is the dreaded “Code of Silence” which prevents a pledgee from reporting a fellow student, faculty member, coach, bandleader, or alumnus participating in the activity.

Campus crackdowns, strict Codes of Conduct, frat-house closings, and criminal charges such as Felony Hazing and Misdemeanor Hazing, are among the solutions. Tracking hazing deaths as crimes and not as mere accidents is another. Forty U.S. states have anti-hazing laws; however, most of them track hazing deaths simply as accidental deaths. The point is, any death due to hazing is an avoidable, preventable death. The questions are, how many funeral programs will have to take the place of graduation programs before this archaic, arcane, Medieval-style practice ends? If your son is not safe on a college campus in pursuit of a dream and a degree, where is he safe? When did college degrees become dangerous? Someone needs to answer, and someone needs to pay.

It’s worth noting, for generations, millions of fine young men and women have safely pledged fraternities and sororities on HBCU and other college campuses all across the U.S.—many of whom are successful professionals in their fields of endeavor.

However, like most things, it only takes a few to ruin things for the rest.

I’ve attempted to meet with the new president of Edward Waters College, Dr. A. Faison Zachary, Jr. and with Bishop Richardson of the 11th District of the AME church, a major benefactor of EWC.

I’ve received no response as of this writing. I will continue to seek their input and perspectives.

Learn more about the history of hazing deaths from 1737-2019 at http://www.hanknuwer.com/hazing-deaths/