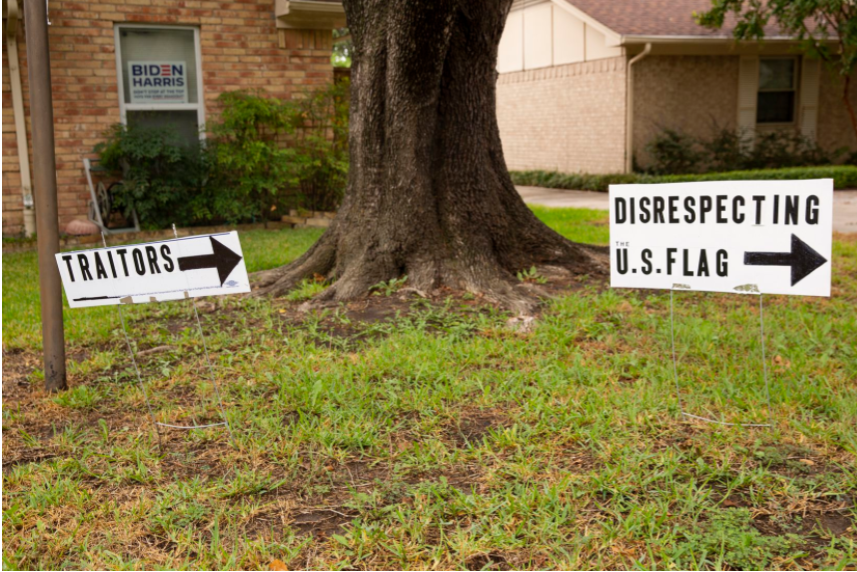 In the quiet suburb of Farmers Branch, the war of words reaches a fever pitch.

Here among the manicured lawns and scenes of suburban serenity, two Farmers Branch neighbors wage a war of words.

They have barely spoken to each other. They’re letting their signs do the talking.

“Traitors” reads one sign, with an arrow pointing like an accusing finger across the street. There, on a corner lot, a neighbor has sprinkled yard signs for Trump-Pence 2020 and other Republicans running in local races.

The campaign between President Donald Trump and Democratic candidate Joe Biden can be judged by election polls, debates, advertising, or even who generates the most clicks on Facebook. But way below the media radar, at street level, politics can gyrate crazily from house to house and neighbor to neighbor.

On local neighborhood forums, like NextDoor, homeowners have reported their signs getting stolen — a perennial problem during election season.

But in a clear demonstration of the escalating tensions brought on by this year’s heated presidential election, someone vandalized political signs with spray paint along upscale Northaven Road in North Dallas.

In one of the yards, several Democratic campaign signs were sprayed with red paint about a week ago, including one touting Biden-Harris for president and another endorsing incumbent Rep. Colin Allred, a Democrat, for Congress. Several other houses with Biden-Harris signs were hit the same way on the street.

“The audacity of someone going onto someone’s yard and spray painting their campaign signs — it’s a byproduct of the age we live in,” said Bobby Abtahi, a lawyer and civic leader, who posted a photo of one of the yards with defaced signs on Twitter.