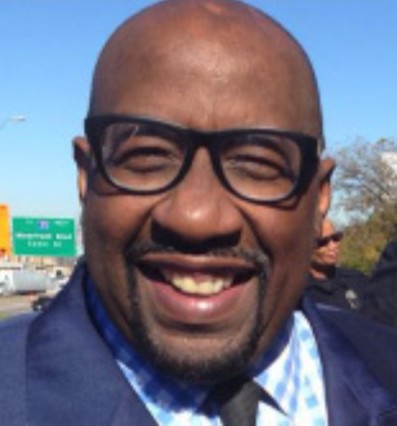 If you shop online for a shoe with rhinestones, suddenly rhinestone shoes show up everywhere. If you purchase an airline ticket, everything related to travel pops up. Like it or not, “Dynamic Ads” are as annoying to consumers as they are appealing to marketers. And they ain’t going nowhere.

So, this T-Shirt shows up. I didn’t search for T-Shirts, I don’t really like T-Shirts. You’ve seen it before because they are often advertised on Facebook.

It simply but sagaciously reads; “Don’t let your President Get your Ass Whooped.”

There’s one technical problem. The message transliterates as an ethnic quip. That being the case, one word needs to be changed; “Don’t let your President get your Ass Whipped.” With Black parents, you don’t get “whooped”, you get whipped! The difference is two-fold, in meaning and intensity.

According to Rucker, the customer didn’t stop there, adding, “If Trump wasn’t president, you wouldn’t even have a job” and “you’re from the ghetto, what do you know?”

If only I could’ve frozen the frame in this scene between 60-year-old store associate Maurice Rucker and one of Trump’s nameless “Deplorables.” The employee who was recently named “Cashier of the Month” could have exchanged his orange smock for a DLYPGYAW T-Shirt.

Trump has created an environment where racists are bold, brazen, vicious and vocal. DLYPGYAW conveys a caveat for rabid Trump extremists.

“Maurice Rucker, 60, lost his job at an Albany, N.Y., Home Depot after he said he was subjected to racist verbal abuse, which he said was unlike anything he’s ever experienced. The fallout has left him shocked, WNYT reports.

Rucker said the incident all started last Thursday when a customer approached checkout with an unleashed dog. “I’ve lived all over the country and I’ve had no one talk to me the way that this guy talked to me,” Rucker said.

The barrage of insults continued until the 60-year-old couldn’t take it anymore.

As someone who teaches customer service strategies, I struggled to find Home Depot’s rationale for firing this brother. Moreover, Black folks think Rucker deserved a plaque and a cash award for not unloading on this arrogant example of white superiority. Personally, I’ve been called Nigger, Coon, Jungle Bunny and worse many times, but always on the phone, never in person. One of us would have gotten an ass whipping on aisle 13. Rucker deserves that Nobel Peace Prize Trump thought he was up for.

Home Depot spokesman Stephan Holmes said Rucker was fired because the customer called to complain about Rucker and he did not follow their policy to “disengage.” After internet warriors and journalists plastered the Twitter accounts of Home Depot executives with protests, the company relented and changed their tune.

They offered Rucker his job back, but he hasn’t decided whether or not to take it. As I read an- another account of the incident on timesunion.com, Rucker’s hesitance made sense. The columnist brought it into perspective in one paragraph.

“I’m happy to say that readers reacted strongly to Rucker’s story. Many were furious with Home Depot — and not only because Ruck- er was fired. Many couldn’t believe he had worked for the company for 10 years, starting in a store near Boston, yet had only seen his hourly rate increase from $12 to $12.78 an hour over the period.”

Rucker was fired from a job that paid him like a Nigger because he didn’t react correctly when he was treated like one. The dynamic advertisement didn’t get me, but I bought a T-Shirt anyway.

This President is gonna get a lot of people’s ass whipped and they need to be warned.

QUIT PLAYIN: Will it Go Round in Circles?

The online magazine “Stereogum” posted a June 2019 article about one of my favorite musicians. Reading it led to me going back to do...

This editorial is a shameless plug for the Democratic Party. I’m not going to lie; I’m asking you to vote straight Democrat. The Texas...