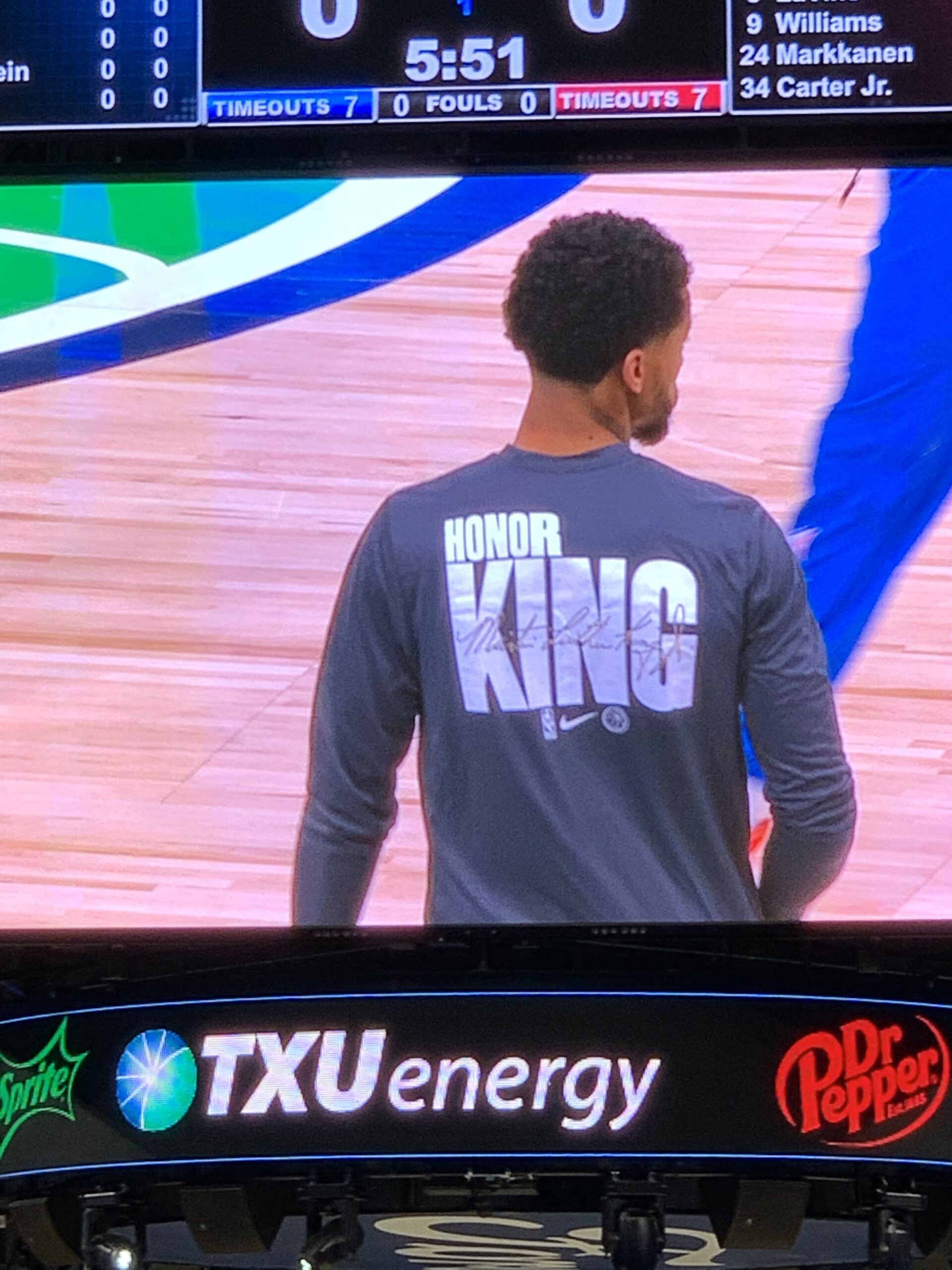 As we celebrate the life and legacy of Dr. Martin Luther King Jr., we do so in light of the past year and with thoughts of George Floyd, Ahmad Aubery, Breonna Taylor and others. We recall the events of 2020 including the Black Lives Matter Protests and marches for justice, and we look at 20201 and the insurrection on the Capitol earlier this month, and wonder, will his dream of equality ever really come true?

The NBA—at the forefront of last year’s social justice initiatives, also celebrates MLK Jr. Day with its annual showcase of basketball games. Per NBA.com, the tradition of NBA basketball on Martin Luther King, Jr. Day dates back to when the national holiday was first established in 1986 to honor the civil rights leader.

Ten games will be played today including five that will be broadcast on NBA TV and TNT. Throughout the MLK, Jr. Day Weekend, the NBA family has worn custom Nike MLK Day warm-up t-shirts designed in collaboration with the NBPA, MLK Foundation and Martin Luther King III.

Throughout the weekend, all 30 NBA teams have also honored Dr. King’s fight for justice and examined the history and impact of inequality in America. Please visit NBA.com/MLK for additional information on team and league celebrations, action, service and conversations. Use the hashtags #NBAonMLK #MLKDay to search for coverage.

Locally the #Mavs showed PSAs featuring Dr. King, Jr., and encouraging racial justice during its Sunday home game against the Bulls. They will play tonight [Monday] vs. the Raptors in a 6:30 pm game televised on Fox Sports Southwest.

Coaches and players shared in their own words what Dr. Martin Luther King, Jr. Day has meant to them over the years, and what it still means today.

Mavs Assistant Coach Darrell Armstrong: “I want our young kids today to understand what Dr. Martin Luther King Jr. meant to the Civil Rights movement. I want them to know the things he was advocating for in the early 60s are the same things we are fighting for today. It was the same fight for equality in 2020 with the Black Lives Matter movement and the untimely deaths of George Floyd, Breonna Taylor, Ahmaud Arbery and others. Martin Luther King Jr. would be proud of today’s African American athletes and leaders. I am proud that we still stand for justice and equality, and we are still striving to make the world a better place.”

Mavs Assistant Coach Jenny Boucek: “MLK day has become even more prophetic and powerful to me. Going back and listening to the prophetic truth being spoken by Dr. King so many years ago, I pray that we, as a nation, would finally heed and act on his words, warnings and exhortations. The precision of Dr. King’s wisdom is divine and I believe that we need to revisit his teachings with urgency and humility. This is not a day just to remember or celebrate, it is a man to study and sincerely listen to and follow the truths he shared.”

Mavs Guard Jalen Brunson: “If we are truly trying to make strides to be just and fair, MLK Day should be a day of reflection for everyone to determine what we can do better as individuals. The only way we can move forward collectively is by each person taking accountability and doing their part.”

Mavs Head Coach Rick Carlisle: “It’s [MLK, Jr. Day] always been meaningful. It’s always been significant. With the events of the last nine months, going back to George Floyd, Jacob Blake, the incident at the Capitol…it just put a greater light and a more powerful microscope on the importance of Dr. King’s words. And so, I just think top to bottom in this league there is just going to be an even stronger feeling about it.”

Prev ArticleNext Article
Use your ← → (arrow) keys to browse
In this article:Dorothy J. Gentry

Neighbors are still reeling over flooding on this street; Dallas says it isn’t responsible