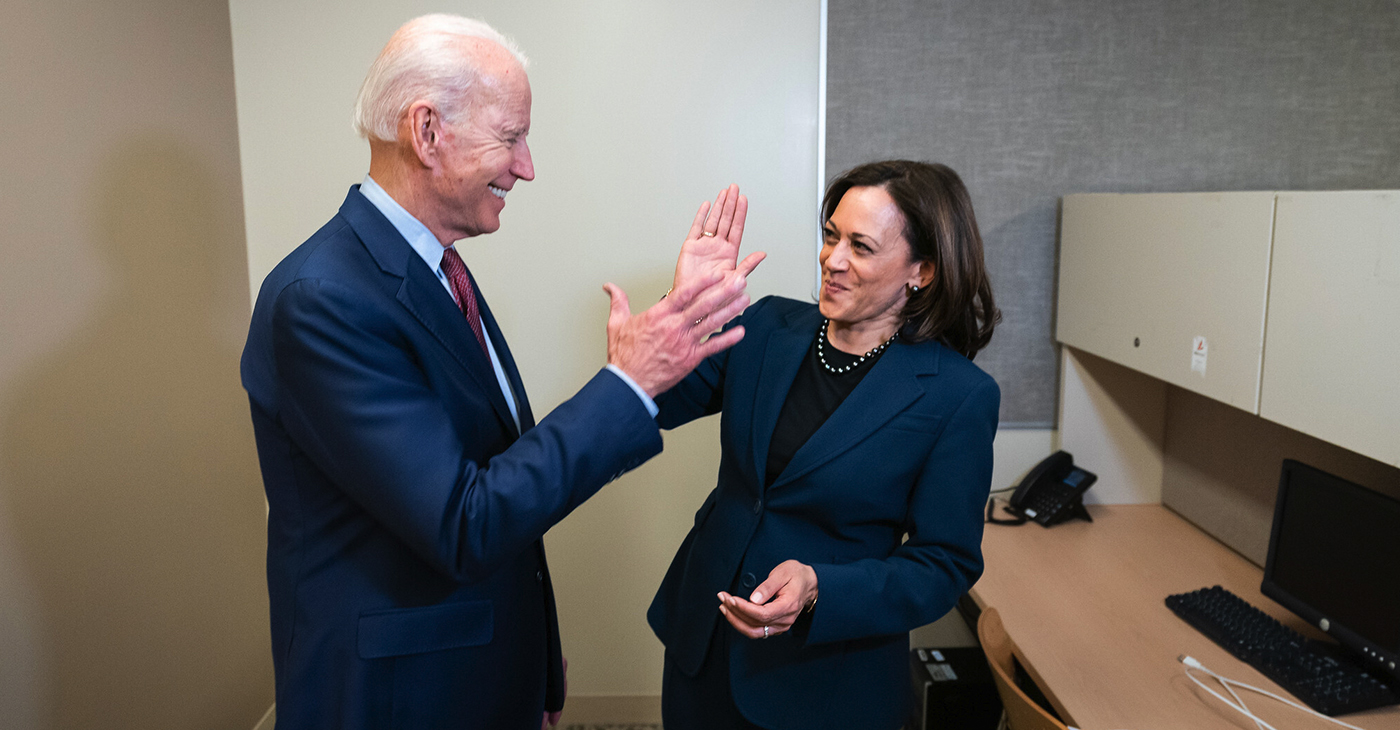 Joseph R. Biden, Jr.,  whom President Donald Trump mocked as “Sleepy Joe” during a contentious campaign for the White House, officially became the 46th president-elect of the United States on November 7, bringing with him the country’s first Black and first female vice president-elect, Sen. Kamala Harris.

“We have been living our worst nightmare,” Caldwell said of she and her African American friends and family. “I’m so glad it’s almost over.”

She acknowledged there still could be legal challenges to Biden and Harris’ election.

Trump “isn’t going away,” she said, “but at least he will not control the levers of power. To God be the glory.”

In Dallas and across the Metroplex, the historic election of Harris, the daughter of a southeast Asian immigrant mother and a Jamaican-American father, brought many voters to tears and sparked small, impromptu, in-home gatherings amongst intimate friends.

“I’m absolutely overjoyed about this and finally able to breathe a sigh of relief for our democracy,” said Kmeal Winters, 45, of Dallas who, like Sen. Harris, is a member of Alpha Kappa Alpha Sorority, Inc. “I had been watching the news nonstop all week, not wanting to miss the actual moment President-elect Biden and Vice President-elect Harris were announced.”

Leshawnda Larkin, 45, also of Dallas, planned to join a pair of virtual Zoom gatherings, Saturday evening, among friends to celebrate the election of Harris, a graduate of the historically Black Howard University in Washington, D.C.

“I am ecstatic. I have experienced so many feelings today,” said Larkin, a Howard graduate and also a member of Alpha Kappa Alpha Sorority, Inc.

“This is truly a historic day,” she said. “To have the hope of a new regime for the U.S., to have someone who looks like me in the White House, to know that Black people, women, really helped to steer the course of this election, I have tears of joy.”

Harris greeted and thanked historically Black college students and their alumni, Greek-letter organizations and women’s rights groups during her speech Saturday night. She acknowledged hers and Biden’s win was helped by the grassroots work of those often marginalized and overlooked groups whom she said had worked tirelessly to get voters to the polls.

They made the difference, she said, in the historic election, which garnered more than 140 million votes, the most of any election in U.S. history.

Along with thoughts of her mother, Harris said she was thinking of “the generations of women—Black women, Asian, White, Latina and Native American women throughout our nation’s history who have paved the way for this moment tonight.”

Harris said women had “fought and sacrificed so much for equality, liberty, and justice for all, including the Black women who are too often overlooked, but so often prove that they are the backbone of our democracy.”

During the months preceding Tuesday’s general election, scores of HBCU administrators, coaches, band directors and others on HBCU campuses across the South, worked successive weekends to register college students— and usher them to the polls on Election Day, November 3.

At Southern University and A&M, a 15,000-enrollment public institution in Baton Rouge, La., the campus’s head basketball coach registered 100 percent of his players—then distributed a video challenging other HBCU students and alumni to do the same.

The effort was mirrored across the nation at other Black colleges, with graduate sorority and fraternity groups and alumni posting videos of their voter registration successes in social media online chat groups.

Many were energized to register voters less because of Biden’s candidacy and more because they wanted to see Harris as the first Black woman vice president of the United States.

On Saturday, it didn’t take long for HBCU alumni to gather in celebration.

Oliva Wright, 24, and a graduate of North Carolina A&T University, and two fellow HBCU alumnae, met at Gloria’s Latin Cuisine in Southlake for a group hug. All had voted for different Democrats in the primary election, but each supported the Biden-Harris ticket in the general election.

Wright, wearing her North Carolina A&T sweatshirt, met her girlfriends – all of whom also donned Afro-centric apparel. One wore a tee-shirt with an image of poet Maya Angelou and the other sported a tee with the slogan “Black Lives Matter.”

The 2020 election rhetoric and its tense racial overtones had worn on them; the apparel united them in mutual understanding and support, Wright said.

After leaving dinner Saturday night with her friends, she felt better, Wright said, “We’re now on the right path.”

In the weeks before the election, Wright said she had become emotionally drained fielding questions from white clients regarding whether racism was “really that bad” and receiving weekly text messages from friends who cautioned her to avoid traveling certain routes to her home in Keller, in Northeast Tarrant County, because Trump supporters held frequent rallies where they flouted Confederate flags and slowed traffic.

In Frisco, north of Dallas, immigrant Americans said Harris resonated with them in a similar way as she had done with HBCU alums and Black members of Greek-letter organizations.

Peter Burns, whose parents brought him to the United States from Kingston, Jamaica when he was a child, said Harris’ victory was “huge.”

“It’s a perfect example of America being America where you can come here from just about anywhere in the world and be an American, and start your family,” said Burns, a retired Army veteran. “Then your family can take advantage of what America has to offer and rise up to be just about anyone, all the way to being president of the United States.”

Amenze Enobakhare Jones, an African American mother of three who lives in Mansfield, said her young children had become intimately invested in this year’s presidential election after their suburban, private school classmates had continuously taunted them with support for Trump’s immigration and other policies.

In the days after Tuesday, Jones said her 10-year-old daughter Sydney and nine-year-old son William had become anxious awaiting a decision, she said. Not wanting them to be disappointed in the election results, Jones took a practical approach to explaining the election’s potential outcome.

“I sat down with the kids and said, ‘Listen, you win some. You lose some. But in all, you walk out with dignity,’” she said Saturday night. “All of this is a lesson.”

When William Jones texted his mother with the most recent numbers placing Biden and Harris ahead of the requisite 270 Electoral College votes needed to seal the election, Jones said she was relieved, both for herself and for her children.

Dallas residents said the four-day wait for a determination regarding who would become the country’s 46th president was challenging.

Julie Paramo of Dallas said she had election anxiety for most of the week. Paramo had worked to register and encourage LatinX voters to go to the polls.

After Saturday, she said, organizers should restore themselves.

“For me, I think it is important for us to rest, celebrate and recollect ourselves and acknowledge how the work we have done has contributed to this victory,” said Paramo, 23.

“But the work does not end here. We are ready to keep going and take it to the local election coming up in six months,” she said. “We are still going to be out doing food distributions, tending to our community gardens and community fridges and fighting for the sense of unity in the people that the community here in Dallas should have.”

Alexandra Martinez, 25, who lives in Dallas County near Southern Methodist University was thrilled to hear the news.

“Just knowing that we have a new president coming in that doesn’t accept violence, is not a racist, supports the LGBTQ community and dreamers, makes me excited about the future,” Martinez said.

She celebrated with her boyfriend by going to downtown Dallas and holding up Biden-Harris signs that read, “Adios,”  or “goodbye” in Spanish, on the back.

Her boyfriend, Alan Melendez, 26, said he can now “breathe again” and looks forward to a calmer social and political environment.

When Melendez heard of the Biden-Harris win, he played the song FDT by YG and Nipsey Hussle. The hip hop song criticizes President Trump for his strained relationships with Muslims and accused the president of being racist.

“I played it really loud, maybe my neighbors heard,” Melendez said. “It was exciting more than anything,” he said, laughing.

Vicki Flynn, held up her Biden sign outside of her pickup Saturday and honked as cars drove by her home near Mockingbird Lane in Dallas.

She was scheduled to drop in to work Saturday at her job at a suburban independent school district. She decided to honor Biden’s victory by calling in.

“Oh my gosh, I felt like I lost a hundred pounds, maybe even a thousand,” said Flynn, 61.

“I just have pure tears of joy,” said Flynn. “We’re going to make America kind again. I feel like I had a president who didn’t want to represent me for four years.”