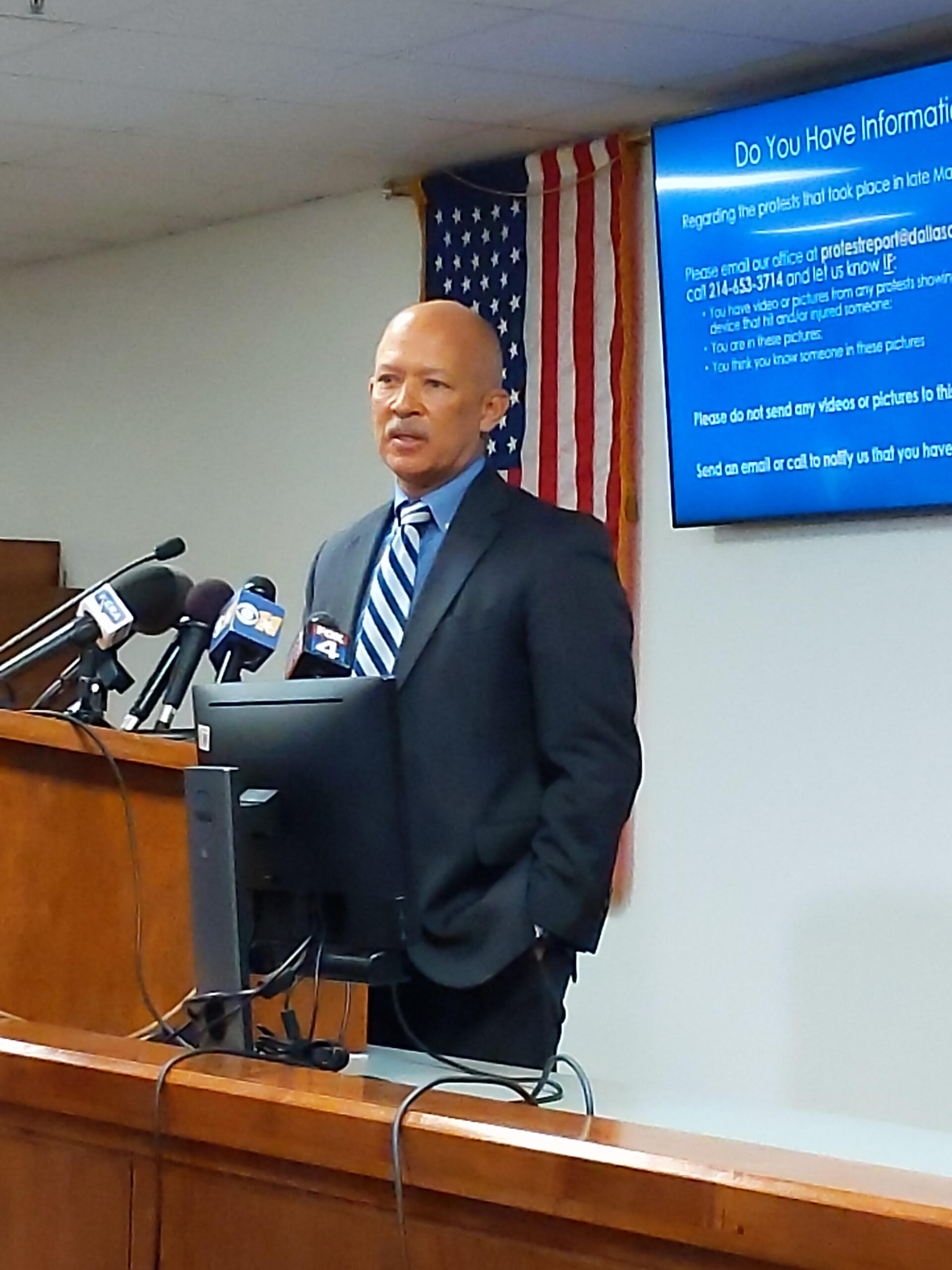 At one point in the press conference held Thursday by the Dallas County Criminal District Attorney’s Office, District Attorney John Creuzot iterated that he believed Dallas was a safe city.

“I don’t assume that we’re going to have a breakout of violence. I think that Dallas is a peaceful city,” he said during Thursday’s briefing.

Still, that didn’t negate the need for the DA’s office to solicit the public’s help finding out how protestors got injured during this summer’s protests. The Office is specifically looking for any photos or video that may help shed light on what happened in three separate incidents on May 30 when citizens were struck by projectiles fired by a Dallas Police Officer.

“The Dallas County Criminal District Attorney’s Office is investigating these incidents, and we would like to review any videos or photographs that may have captured the moments surrounding the above times,” the Office said.

The Judge said it’s critical that local residents who attended the protests take some time to look back through their photos and video, and added that the information is needed as soon as possible.

“What we’re interested in seeing is the direction of the projectile,” added DA Creuzot, while adding that this information would be critical in bringing any guilty parties to justice.

For demonstrators who are reluctant to “give up” this information to law enforcement, Creuzot was clear – no one is in trouble. “Anybody who was there and saw this, they’re not going to be any charges filed against them,” he said. We need their help and the help of the public to investigate these occurrences.”

A spokesman for the Dallas Police Department says the DPD is aware of various complaints regarding officers’ use of force during the protest and is actively looking into the allegations.

“We have ongoing criminal and administrative investigations that we are unable to comment on,” said Sgt. Mitchell Warren in an email to Texas Metro News. The message also indicated there is an active investigation into Sergeant Roger Rudloff, who was photographed firing pepper balls at a protester standing only a few feet away.

“He remains on Restricted Duty during his ongoing investigation,” added Sgt. Mitchell.

The Dallas Police Department said in a statement issued in September that they “welcome and fully expect the District Attorney’s examination of the events in late May and early June”.

Anyone with information or potential evidence regarding injuries related to the actions of law enforcement officers during the protests should contact the Dallas County District Attorney’s Office by calling 214-653-3714 or by sending an email to protestreport@dallascounty.org with contact information.