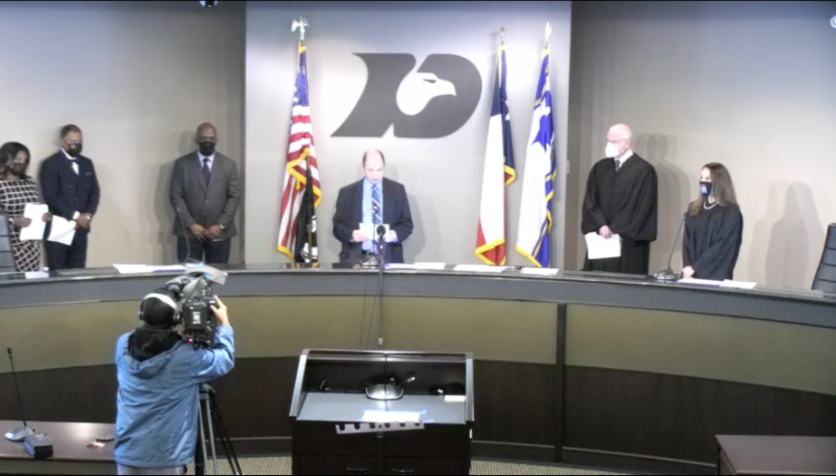 The local leaders hope that regaining the ability to drive and operate a motor vehicle legally will drastically improve the quality of life by anyone who has been affected, putting an end to a vicious cycle of breaking the law.

“Far too many of our citizens for a host of different reasons have accumulated unpaid citations that have resulted in warrants, that have also resulted in repeated arrests,” said Mayor Pro Tem Kenzie Moore.

The occupational drivers license allows a driver to operate a motor vehicle legally for a limited time each day in order to address the basic needs of life, like getting food and medical care. Under the provision of the license, citizens can also drive to and from work and school legally.

“As a judge, every day I see people come into our court who have lost their driving privileges,” said Judge Kurth. “As a result we have this cyclical catastrophe that goes on in our citizens lives, particularly in DeSoto from our residents and it needs to stop. This is the kind of measure that’s going to bring real change in the lives of our citizens.”

Judge Moreno indicated that though this process is not new, it’s the first time locally that a justice court is working in cooperation with a municipal court to make an effort like this widely available to community members.

If the plan is successful it could be repeated elsewhere in Moreno’s precinct, which also includes Irving, Grand Prairie, Duncanville, Cedar Hill, Glenn Heights, and Ovilla.

“We’re going to set an example, not just for other cities but potentially statewide and nationwide. We need to continue working together to find solutions instead of just fighting each other,” Judge Moreno added.

One citizen referred to the program as a “common sense program.”

Myra Mendoza Hernandez, a DeSoto resident, said, “It’s good to help the community instead of just punishing them. People do make mistakes, but we should come together as a village to help bring people up.”

Residents who have had their drivers licenses suspended because of excessive or unpaid traffic citations can contact Judge Kurth at the DeSoto Municipal Court to check their eligibility to drive with an occupational drivers license.

“When we push aside bureaucracy and red tape and we center on working class people, we come up with innovative solutions such as this one,” said Councilwoman Quarles. “Because different branches of government were able to come together and bring our unique perspectives to the table we were able to jumpstart a process that will be able to change lives as soon as possible and keep our families together.”

More information about the filing can be found here.