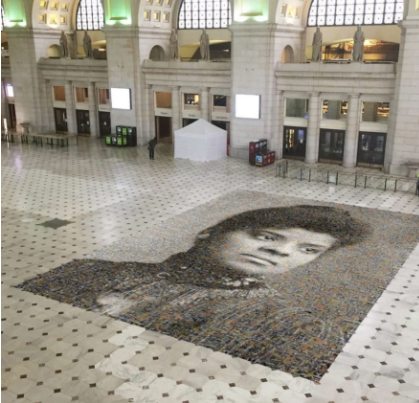 The right to vote is important and has been an ongoing conversation, especially recently during the Democratic National Convention. In the nation’s capitol a huge splash of this message is literally emphasized on the ground at Union Station.

Tourists and locals will be able to go into Union Station and see a mosaic of trailblazing journalist Ida B. Wells-Barnett on the marble floor. But they aren’t just highlighting Wells. In the picture, there are over 1,000 portraits of suffragists.

By using all of these faces, organizers say it showcases how many voices it takes to spark a movement. The mosaic also is a reminder to society that this is the 100-year anniversary of the 19th Amendment’s ratification. Wells was an activist, reporter, and educator who pushed the limits when it came to voting and change. She was an active force within the women’s right movement and became the founder of the National Association of Colored Women’s Club.

Wells-Barnett has impacted so many lives, and from this mosaic continues to remind younger generations of the value of a voice.