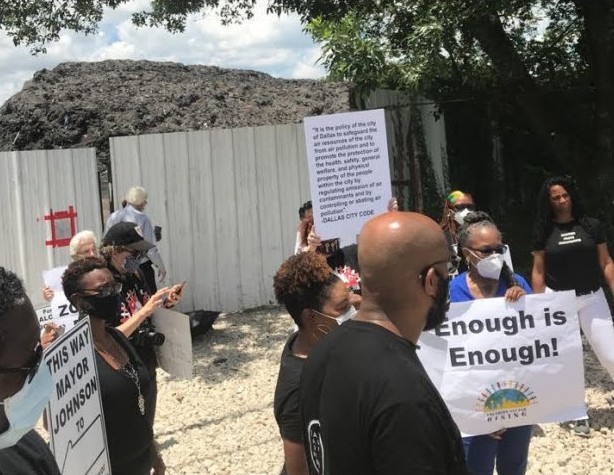 Calling Shingle Mountain a public health crisis, protestors gathered last week outside of what some have designated as one of, if not the most “unsightly images” in the city of Dallas. More than a year ago, Texas Metro News’s Vincent L. Hall wrote about the atrocity that has developed into a “more than almost 100,000-ton pile of hazardous and toxic waste, towering higher than a four-story building,” a definite eyesore in south-east Dallas County of South Central Expressway.

Marsha Jackson, despite her declining health, continues battling city officials, county officials, and anyone who will listen asking for Shingle Mountain to be removed. Others are joining in as Friendship-West Baptist Church and Southern Sector Rising stood with Jackson as she talked about the effect Shingle Mountain is having on the health of residents. According to organizers, it was” racist zoning that may have allowed” Shingle Mountain to exist.

Dr. Frederick Douglass Haynes, III, senior pastor of Friendship-West, surrounded by others who wore their masks and practiced social distancing, weathered the almost 90-degree weather to implore Dallas City Council members to “support a budget that funds the immediate and full removal of Shingle Mountain.”

“This is a toxic waste dump, a public health crisis,” said Dr. Haynes. This was not the first time that residents have gathered to express their dissatisfaction with Shingle Mountain. Local NAACP leadership, community activists and residents have been vocal about the need to hold businesses accountable.

Dallas County Commissioner’s Court issued a resolution calling for action from Blue Star Recycling Company. While there appeared to be an effort to begin moving earlier this year, even with the state saying the mountain would be gone by now, it still stands. “Quit giving them time,” said Jackson. Sporting a hashtag, #WeCantBreathe, Friendship-West leaders and members have been on the frontline of fighting for social and economic justice, eradicating hunger and serving the underserved in Dallas, Texas, for 40 years. Dr. Haynes said this was an issue that would not go away until the mountain is gone.

Prev ArticleNext Article
Use your ← → (arrow) keys to browse
In this article:Quit Playin, Vincent L. Hall

QUIT PLAYIN: Live It Up!

“Build houses and settle down. Plant gardens and start your own business. Marry and have children and let them marry. Don’t allow the naysayers...

By Vincent L. Hall Believe it or not, in the early 1970s, few African Americans could afford to live in Pleasant Grove. The only...

The useless, predictable tragedy that occurred 352 miles southwest of Dallas County mesmerized and then terrified us. The jolting images of those hope-filled faces...