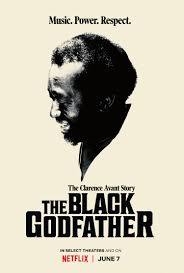 June is Black Music Month, and just in time for the celebration is a Netflix documentary by director Reginald Hudlin, The Black Godfather. It’s an amazing story about African American Clarence Avant who is probably the most influential man in Black Music who you have never heard of. Amazing is the only word to describe the impact he’s left on Black Music and culture.

He began as a manager in Harlem in the late 1950s and only recently received his recognition with a star on The Hollywood Walk of Fame in 2019, at 84-years-old. The names and the stories involved with his help to achieve success read like the history of Black Entertainment. He worked in nightclubs helping to give legitimacy to artists like Sam Cooke and Dinah Washington and is credited with amazing deals with artists like Jimmy Jam and Terry Lewis, L.A. and Babyface, Michael Jackson, Quincy Jones, and he even had a hand in brokering a deal to get Barack Obama the Democratic nomination for president.

His daughter got her father’s blessing to work in Obama’s campaign. Even though he thought Obama would lose he is given most of the credit for getting the first Black president in office. The loving story shared by all of the famous artists, athletes, and politicians is an amazing and inspiring story of a man who always gave a “hand up” to African Americans who needed a hand. Even former president Bill Clinton talks about how Avant gave him the strength to keep going when Republicans were trying to kill his legacy and get him out of office. He says Avant advised him to stay the course and do his job.

There are so many jaw-dropping stories about artists who needed help and who got it from Clarence Avant. When Biggie was killed in Vegas, it was Avant who got Puffy out of town by car so he wouldn’t be in public, catching a flight. Puffy gives him credit for saving his life. In another story, Michael Jackson cut a soundtrack for the movie ET and didn’t have permission from a rival record label to release it. Avant brokered that deal to get it released, leaving Michael so impressed that he hired Avant to be in charge of the Bad Tour. The stories go on and on, but Clarence Avant’s life story is a very enjoyable tale. It’s on Netflix, and on “My Hollywood Popcorn Scale,” I rate The Black Godfather a JUMBO!