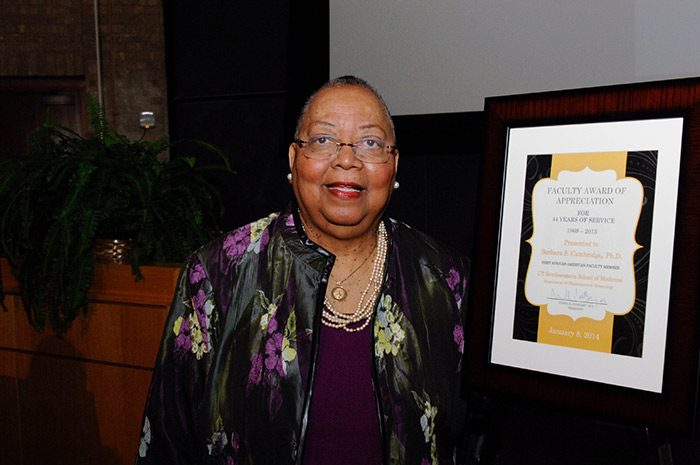 By Nyshicka Jordan
Special from the UT Southwestern Center Times

Dr. Barbara Cambridge, the first African American full-time faculty member at UT Southwestern, is remembered as a passionate advocate for the health of vulnerable women in Dallas. The respected social worker died Sept. 26 after a short battle with pancreatic cancer.

“Barbara was about making a positive difference in people’s lives. That’s really her legacy,” said Dr. Stephen Heartwell, once Director of the former Division of Community Women’s Healthcare in the Department of Obstetrics and Gynecology. (The Division was disbanded in 2005.)

In 1969, Dr. Cambridge was appointed Social Services Director for that Division, originally called the Greater Dallas Family Planning Program. It’s a role she held for 12 years. Dr. Cambridge was recognized for her 44 years of service at UT Southwestern during the Martin Luther King Jr. Commemorative Celebration in 2014.

By the time she retired from UTSW in 2013, Dr. Cambridge held the rank of Associate Professor of Obstetrics and Gynecology and participated extensively in clinical and research activities. Additionally, she played a key role in bringing integration and diversity into the spotlight for UT Southwestern Medical School, according to Dr. Drew Alexander, Assistant Dean for Community Engagement.

“We came through at a time when opportunities were lacking for minorities and were fortunate enough to be part of the transition and at the forefront to allow the building of the experiences that young people have today,” said Dr. Alexander, who joined the faculty in 1977.

Colleagues and family members said Dr. Cambridge – an advocate for the health of women and girls – was involved in some 40 community organizations throughout her life. They included Planned Parenthood, Hope Cottage, Girls Inc., Leadership Dallas, and St. Philip’s School & Community Center.

In the late 1960s and early 1970s, she advocated for women’s access to birth control, and in the 1980s, as the HIV/AIDS epidemic unfolded, she fought to raise awareness about how the crisis affected women.

I learned so much from her

When Dr. Cambridge came to UTSW, she was among a handful of family planning associates hired to recruit and perform outreach to targeted female patients at Parkland Memorial Hospital and its clinics. The Greater Dallas Family Planning Program focused on medically indigent patients in South and West Dallas.

Most of the women in the program, 74 percent, were black, Dr. Heartwell said. “Barbara and her staff were the face of our program in those communities – and lived in those areas. That made a huge difference in terms of their ability to effectively recruit patients.

Having staff who understood the problems faced by those patients made a significant difference in the program’s credibility,” he said. The program’s goals included reducing infant mortality and providing family planning education services, prenatal care, and access to free birth control.

At that time, Dr. Heartwell said, many women were returning to Parkland with a history of multiple unintended pregnancies. At the start of the program, women in that targeted patient population gave birth to 4.5 children on average. That number later declined to 2.1 children on average.

Dr. Cambridge’s contributions led to the program’s success, he said. Dr. Cambridge was not afraid to express her opinions and provide a different viewpoint, both as an African American woman and as a social worker, Dr. Heartwell added.

“She brought a different perspective that I and most of my white colleagues in health care administration and the physicians could not because she could talk about issues that most of our staff had never experienced or faced in our lives,” he said. “Every day with Barbara was a new day of education for me, I learned so much from her.”

She was a trailblazer

“I looked to her for guidance in how to be a successful faculty member myself.” Dr. Rhodes, who joined the faculty in 2009 as a geriatrician and health services researcher, conducts research that examines racial, ethnic, and socioeconomic disparities in end-of-life care. She turned to Dr. Cambridge as a resource on some of her research projects.

Dr. Rhodes said she had many conversations with Dr. Cambridge about how to navigate challenges specific to minority faculty members. Dr. Rhodes would also direct her own mentees to Dr. Cambridge when they struggled with similar issues.

“She was a trailblazer and a pioneer. I can’t imagine that being the first African American faculty member here was easy, so the fact that she was able to do it successfully kind of speaks to her character,” Dr. Rhodes said.

“Her insight, sponsorship, and willingness to speak up for me and the few other African American faculty members back in those days was extremely helpful,” Dr. Alexander said. Over the years, the two colleagues developed a close friendship and continued to collaborate on ideas to expand community health care initiatives, even after Dr. Cambridge retired from UTSW.

“She was kind of my go-to family. She was one of a kind who was a master at listening and a great analyst and I will miss that about her,” he said.

She was passionate about everything she did

Besides juggling roles as a faculty member, social worker, and community advocate, Dr. Cambridge raised a daughter and a son as a single mother following the death of her husband, Henry Cambridge, in 1974.

“Because she was a single parent at an early age, she wanted to make sure that women got adequate care, had a roof over their heads, and the funds that they needed. She put herself in their shoes,” said her daughter, Latrelle Cambridge, who works at UTSW as an Education Coordinator in the Office of Medical Education.

She said she was proud of how her mother carried out her work and professional responsibilities. It wasn’t until her mother passed away that she realized just how many organizations her mother was involved in. “I am just in awe of all the things she did and how she was able to raise my brother and me.

I am so proud of her and the many hats she wore throughout her life. She was truly passionate about everything she did and every person she touched,” Cambridge said. Three people, an older woman next to an adult man and woman, sitting next to each other and smiling even as busy as she was, Dr. Cambridge never missed their school events and showed up the same way for her three grandsons.

Her son, Gene Cambridge, said he learned about living a life of purpose from his mother. Her career influenced him to pursue work in social services. “I will miss her guidance and support. I’ve had the opportunity to start different projects or businesses, and she would always offer support and guidance to make sure I was walking down the right path,” Cambridge said.

Dr. Cambridge died about eight months after she was diagnosed with pancreatic cancer. “Cancer wasn’t easy for her because she had some really painful moments, but she tried her best to make sure we could get through it as easily as we could,” her son said. “Intellectually we know everyone comes to this season in their lives, but having faith we believed she was going to a better place.”