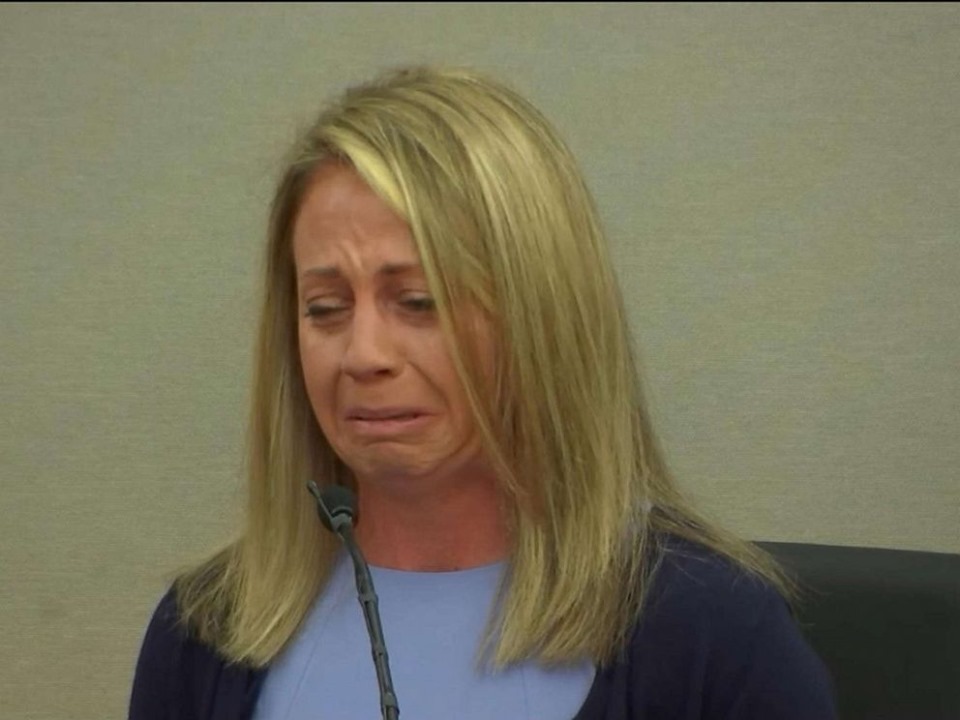 EDITOR’S NOTE: At press time, the jury came back with a guilty verdict. After a break, the punishment phase began with Jean’s mother talking about her son.

DALLAS—The murder trial of a White former police officer, Amber Guyger, caught the spotlight a little over a year after her bizarre killing of unarmed Black man, Botham Shem Jean, in his own home.

She insists she mistook his apartment for her own. The one-time Dallas police officer had seemed unemotional, even apathetic during the trial. But defense attorneys said she was sorrowful for killing in self-defense and in testimony Sept. 27, she cried. Prosecutors said there was no basis for self-defense since Guyger’s life was never in danger.

She entered Jean’s apartment while he was watching television and eating ice cream on the night of September 6, 2018. The Black community and others wonder: Will the family of Jean receive justice, or will a one-time White law enforcement officer live free and unpunished after killing an unarmed and innocent Black person? Judge Tammy Kemp, the Black woman who presides over the trial, has been firm in saying she wants the jury to decide the case free of influence caused by electronic devices, nodding of heads or gestures in her courtroom.

The sequestered jury consists of two Whites, one Asian, four Latinos, and five Blacks. Four jurors are men, and eight are women. There are also four alternates. The first week was an emotional one for the Jean family, many who came from the island of St. Lucia for the trial. They began their time back in Dallas on Sept. 22 by attending services at Cedar Crest Church of Christ. His grandmother, Gloria Charles, told those present it was important to not let her grandson become demonized as has been the case with other Black men who died at the hands of police.

“He was a good boy, a very loving child,” she said. Jurors heard from Jean’s sister who spoke of how she still can’t believe he is gone. She shared the sense of great loss her family feels because of his death. Perhaps the most emotional distress experienced by the family was a video showing emergency professionals trying with much vigor to save Jean, who was still breathing when they arrived.

Some Jean family members sobbed leaving the courtroom as the video played. Cheryl Smith, a longtime National Association of Black Journalists board member, multi-platform journalist and newspaper owner of the Texas Metro News, Garland Journal and I Messenger Media online, was in the courtroom. “First, two officers and then paramedics worked diligently on Mr. Jean. They encouraged him as they performed CPR. You could hear the passion in their voice as they said, ‘come on chief, come on big man,’ while they tried to save his life. It was like they were praying for him to breathe,” Smith said.

Several veteran Dallas police personnel told The Final Call that Guyger’s protocol as a police officer required that she wait and call for backup if she perceived someone was in her apartment committing a burglary. She should not have entered the dwelling by herself to take on any possible intruder, they said. Additionally, she should have been found administering CPR, to try to prevent a fatality, until paramedics arrived. According to the defense, she did administer CPR.

Video captures her pacing back and forth in the hall of the South Side Flats apartment complex on the phone minutes after shooting Jean. Immediately after shooting him, phone records show Guyger texted her patrol partner, Sr. Corporal Martin Rivera, saying, “I f—-d up!” Prosecutors wondered how sorrowful she could be without even an attempt to save the life of Botham Shem Jean. Guyger’s defense attorneys described her as being on mental autopilot due to a grueling schedule that left her too tired to know she was at the wrong apartment, on the wrong floor with a red doormat.

Text messages the defense wanted concealed from the jury, but were allowed by Judge Kemp, showed something else. It was revealed that Guyger, who was fired by the department after the shooting, and partner Rivera, a married man, were involved in a sexual relationship. Guyger wanted to see Sr. Corporal Rivera later that night, texting him about such desires shortly before arriving at Jean’s apartment.

The defense paints the picture of Guyger fearing for her life as she entered the apartment belonging to Jean. They contend she mistook him for an armed burglar and fired her weapon. “Apparently, they were having some issues with the door, it’s supposed to make a whirring sound to let you know, but a red light came on the door with no sound,” said Smith. “They are saying the door was not closed. She came in and the defense would have you to believe that something took place.”

“But the trajectory of the bullet shows that her at 5’3 and him at 6’1 or so that the bullet was shot down. He could have conceivably been sitting down eating that bowl of ice cream as shown in the evidence when he was shot,” said Smith, adding that both the defense and prosecutors agreed there was no prior relationship between the two. Guyger testified that she wanted to be assigned in the Southeast section of Dallas, which is predominantly a Black community, because that’s where she would get the most training because of high crime.

The defense attorney made a point to ask her about the neighborhood surrounding the South Side Flats, which she said was riddled with homeless people who jumped gates to sleep on patios and she did not fully feel safe when she walked her dog. “I was scared that someone was in my apartment and was going to kill me,” she said through tears. “This is not about hate I was scared.” In her testimony, Guyger said how the Dallas Police Department drilled her during training to always see a suspect’s hands, calling out, “Let me see your hands!”

Prosecutors said Guyger gave no such commands to Jean. When prosecutors asked Guyger did she feel sympathy for Jean the night she killed him, the sympathy displayed during her testimony? Her response was yes. Moments later, they showed her not crying as Jean’s dead body passed her as she sat in a squad car. She was seen on video cam appearing unemotional, looking at her phone.

During cross examination, the prosecution told the jury Guyger never said Jean put her in fear or was armed and coming at her, to her fellow officers or a 911 dispatcher. Guyger said she performed basic life support. When asked she said, “I performed a little CPR.” There was no blood on her uniform to indicate she did. Prosecutors argued several times that Guyger put her needs and wants over a dying Jean—texting and not giving the dying man her undivided attention and walking away more than twice instead of administering life support while her first aid bag was inches away.

During her testimony it was also revealed that she did not rely on her training. Guyger admitted she had not taken a position of cover and concealment or dispatches a radio call for assistance with police help two minutes away. Her general orders were left unattended and void while Jean lay dying. Guyger appeared to be caught in several lies during cross examination. She said she was tired yet was planning to go back to the gym.

She said her morals stopped her from continuing a sexual relationship with her married partner yet was sexting for a meeting with her lover the night of Jean’s killing. Even her supposed fear of the surrounding community was found untrue. Prosecutors showed a text message she sent a fellow officer about how much she loved her new apartment and neighborhood. “The intent to kill, which is one of the elements of murder, was satisfied by Amber Guyger in her shooting of Jean. She did not have to kill him, she could have called for backup, but instead she decided to kill him,” said Attorney Jeryl Christmas, who has dealt with police shooting cases and is based in St. Louis. Christmas said the self-defense argument should not stand. Christmas along with his colleague, Attorney Pamela Muhammad of Houston, Texas, helped residents of Ferguson fight charges in the aftermath of protests following the 2014 killing of Mike Brown Jr.

“Guyger’s defense is so ridiculous. It goes back to the old White supremacist theory that Black people don’t have rights that they are bound to even respect. The notion that this could even be presented by Guyger is totally absurd,” declared Muhammad. “Her theory is based on the idea that White people are entitled to more protection than Black people.”

“The fact that she can even say that she did not have the requisite intent to kill Botham just because she shot, because she had all these things going in her head, this poor innocent and defenseless White female, etc.That defense is purely illogical for a trained police officer and full of bias that we see all the time,” added Muhammad, and Christmas agreed. Gwen L. Hodrick, Licensed Professional Counselor, LCDC, bestselling author said a mental state tied to White supremacy in America is alive, well, and present in the Amber Guyger case. “The history of this country has Africans being brought here to work as slaves, and in doing so being painted as animals, and as a threat who needed to be handled and shackled in order to keep us subservient to them.

That still permeates with us today.” Alshaheed Muhammad, student minister of the Nation of Islam mosque in Dallas, added, “It’s the old European paradigm. In slavery the White women would accuse the Black man of raping her while she was engaging in something unethical or unChristian like, yet the White dominant male justice structure would do whatever they wanted to the Black man and call it justice. Amber Guyger’s defense theory is no different.” Smith was not optimistic even with five Blacks on the 12-person jury. “I have seen so many times when we think we are going to get justice because there are people those looks like you on the panel. That is not necessarily so,” she said. “I want people to look at the facts in front of them and act accordingly.”

No matter the trial outcome, the Nation of Islam in Dallas is prepared to help Black people move wisely, said Min. Muhammad. “If she walks, we don’t want to see our people gunned down in the streets if there is a protest. We help to make sure our people are safe and direct our minds to what the Honorable Minister Louis Farrakhan is organizing us to do, which is to build our own community and separate from those who will not give us justice.”