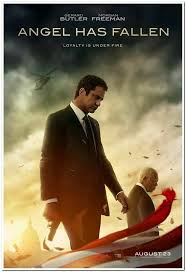 After saving the White House, then saving England, Mike Banning (Gerrard Butler) has to prove his own innocence in Angel Has Fallen after being accused of trying to kill the president, played by Morgan Freeman.

Banning is an aging Secret Service agent with health issues from his years of concussions from protecting the president. After an attempt on the president’s life by a third party, President Tumbull ends up in the hospital in a coma and Banning wakes up handcuffed to a hospital bed, under arrest for allegedly attempting to assassinate the Commander-in-Chief.

Banning’s mission is to escape from custody and to clear his name as an assassin. The cast features some amazing actors. Besides Butler and Freeman, Nick Nolte plays Mike Banning’s dad who is paranoid and living a self-sufficient life as a survivalist. Jada Pinkett Smith is an FBI agent who’s on the case trying to get to the bottom of the mystery of who really tried to kill the president.

The story is a good spy drama with a plot involving the Russians. That makes the story very relevant to the current political climate involving our current real-life president. The action, with some great fight scenes, is non-stop and intense.

The personal relationship between the president and his own personal “angel” also adds a lot to the movie. As in previous roles, Morgan Freeman plays the best president in movies today. Angel Has Fallen is rated R for some pretty strong violence and has a run time of two hours. On my “Hollywood Popcorn Scale,” I rate this movie a LARGE.