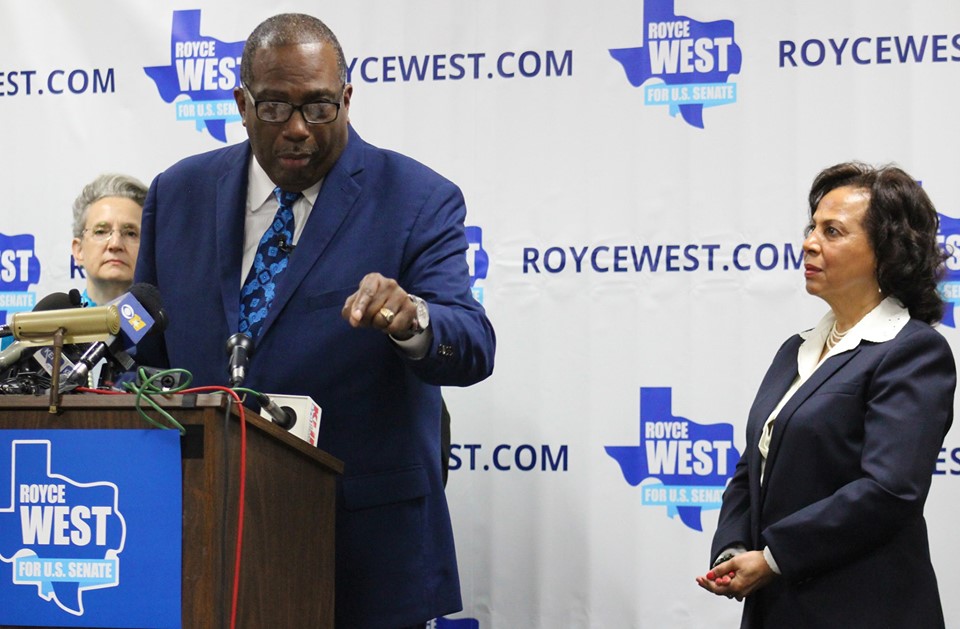 Many are saying the best option to unseat Sen. John Cornyn in 2020 formally entered the race with the filing on July 19 and an official announcement the following Monday. Royce West, a senior statesman from Dallas, entered the Dallas County Democratic Party Headquarters Event Center to a room filled with diverse supporters from across the state, pledging their support of his candidacy.

It was a tight program that featured Dallas County Treasurer, Pauline Medrano, as the host. While introducing speakers, she proclaimed that “Royce is my choice!” In heartfelt remarks, retired educator Shirley Fisher and former Ambassador Ron Kirk expressed their support, followed by an introduction from U.S. Congresswoman and mentor Eddie Bernice Johnson. Sen. West addressed a number of issues before declaring that he was ready for “this moment,” and he is battle-tested.

Touting a record that stretched across all barriers to “do what was best for Texans,” the Wilmer Hutchins High School and UTA graduate, who received his law degree from the University of Houston, said it was time “to reclaim Lyndon B. Johnson’s seat.” Admitting that the road to victory is long, Sen. West said the status of the “country is more divided today than I have ever seen.”

Calling out President Donald Trump for “stoking seeds of divisiveness and weaponizing race,” the State Senator called for a united effort to deal with issues, working together, with Texans taking a leadership role. That is something he said the incumbent refused to do on issues like affordable universal healthcare, abortion, equal pay for women, free public education, gun control, climate control, and immigrant rights/reform.

Fisher said she always knew that West would accomplish greatness. She said that he was sincere, full of determination and an excellent student and athlete in high school. She and her husband, Charles, signed financial aid papers so that young Royce, who had also been voted by his classmates as “Most Likely to Succeed,” could attend college. “We believed in him,” she said, adding that he paid back the college loan.

“I know that Sen. West will be a great U.S. Senator.” Kirk, in discussing his long-time relationship with the senator, talked about the senator’s character and commitment. The former Dallas Mayor and Texas Secretary of State, who also served as U.S. Trade Ambassador in the Obama Administration, Kirk provided a history lesson, as he praised the leadership of former Senator LBJ, who held the seat and went on to become President LBJ.

Following Kirk, Congresswoman Johnson also referenced the former president, who she says was her “favorite president.” Saying more Democrats are needed in the U.S. Senate, Johnson said Sen. West not only believes in sensitivity and diversity, but he also works for it. “He’s a change agent!” The senator enters the race with considerable support from the electorate in the Texas House and Senate with a clear majority on Team West.