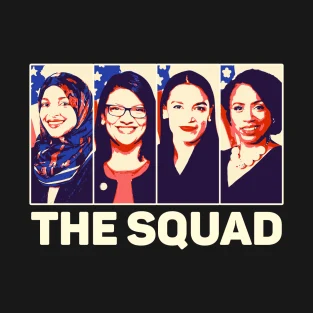 Are you man enough, big and bad enough? Are you gonna let ‘em shoot you down? When the evil flies and your brother (sister) cries, are you gonna be around? – Four Tops, Shaft in Africa Soundtrack, 1973

Donald John Trump lives on the farthest furlough from any Black Superhero you could imagine, but his demonic attack on “The Squad” last week, made me reminisce about Shaft. No, not the one from this summer, I loved that one, but Donald likes to live in the past so I went him.

In the third saga of the Shaft trilogy, Shaft in Africa, Richard Roundtree ditches his debonair “private dick” persona forthe sake of some people he’s been hired to free.

Go get the movie, but when you do, also pick up the soundtrack. One of the songs performed by the Four Tops is the perfect challenge to Black men in the Trump era: “Are you man enough? Big and bad enough?”

That’s the question for American men of all races; are we going to let evil fly?

Maybe you ain’t as handsome as the dashing, young Richard Roundtree. Hell, he ain’t even that pretty no more. But if you’re going to make a difference in 2020 you cannot sit by while Trump profanes the Constitution and women of color.

The numbers reveal that Trump and his hell-raising hooligans are in the minority.

According to an MSNBC poll, when asked, 87% of all respondents believe that America has been divided along racial lines and 59% disagreed with Trump’s tweets of “Go back to their ‘crime infested’ countries!”

Whites were split as to whether Trump’s tweets were racist…41% and 41% no, while 76% of Blacks thought it was patently racist. Politically 82% of Republicans agreed with his tweets and 88% of .

Trump, the effervescent, effortlessly effective imp from Hell, has added a bit of hot sauce to his latest dish by insinuating that Jews should hate “The Squad” too.

In a National Public Radio article last week, titled; “Trump’s Attack On ‘The Squad’ Finds Nuanced Support Among Some Jewish Americans” it appears that his fallacious, if not felonious cries of anti-Semitism are taking hold among some Jewish voters.

The story included the photo of a large sign erected on the front of B’nai Israel Reform Temple on Long Island, supporting Trump. The members were split, but that’s what Trump does best.

He will cut around the edges and then tug at any loose threads that can add to his tapestry of racial division and assertions of “White purity.”

Vocal women of color on Trump’s rolling hit list need air and ground cover. They don’t want or desire our help out of some self-satisfying act of chivalry. We need to protect their right to free speech and dissent from the majority opinion. As men, we must stand on what is right and against what .

As Shaft, Richard Roundtree went back to Africa on his own accord. He was not ordered to go there by a delusional wannabe-despot with a three-dimensional personality disorder.

He did not return to the “Motherland” because anyone accused him of lackadaisical flag-waving.

He wasn’t banished from his birthplace because he failed to fall prostrate before the American altar of “Exceptionalism.”

America has failed to flesh out its fullest potential. Next month, we will commemorate the 400th anniversary of the first slaves.

Sober Americans recall that women and men of all non-white races have been exploited since that moment.

has been our nation’s kryptonite! White women, who voted for and back Trump haven’t been free to vote for very long.

He uses willing White women as pawns, just as he tries to do with law enforcement officers, bikers, NASCAR fans and any other group that is stereotypically stitched to the semblance of “Whiteness.”

Are you man enough; big and bad enough? The Squad needs us…Are you gonna be around?