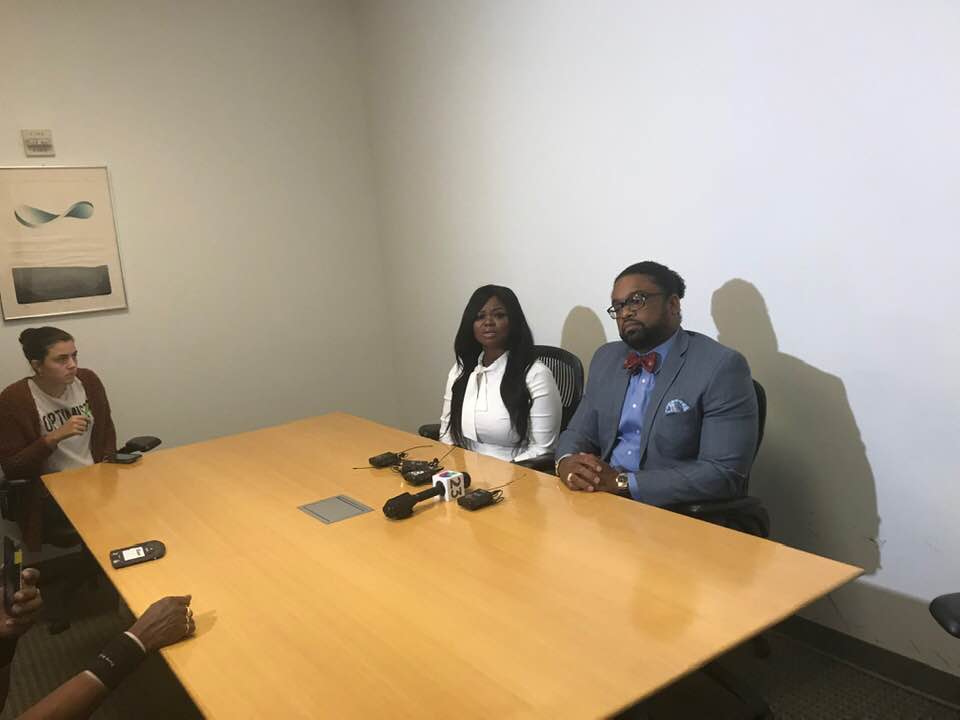 Seated with her attorney Larry Taylor of the Cochran Firm, Uber driver Zonya Robinson recently recounted the attack she suffered at the hands of passengers she picked up from a strip club in Haltom City in early March.

A driver for the ride share service for the past two years, Robinson said she has never encountered the type of customers she did that night and she is disappointed that she didn’t get support from a company she actually enjoys working for.

According to Robinson, she picked up four passengers (three male, one female) shortly after midnight. A male passenger in the front seat made sexually inappropriate comments toward her and after he continued even though she warned him to stop, she pulled over to terminate the ride. The male passengers when confronted about their behavior began to shout racial slurs.

She said she got out of the car to ensure that they left the vehicle. Two of the passengers, Konstantino Garefos and Jesse Mosley, also got out and threw bottles at her. Shielding her face from the oncoming bottles, she suffered deep cuts and excessive bleeding.

Additionally, the Garland resident said, the passengers were “inebriated,” and called her “nigger,” in addition to asking her to perform sexual acts. For her, equally insulting and egregious has been the lack of response from Uber officials.

Robinson filed a complaint with Uber regarding this incident and received no response. With a variety of initiatives recently announced by Uber to enhance passenger safety, she questions whether the company values the safety of its drivers.

In response to I Messenger Media’s query, an Uber spokeswoman said, “Violence has no place anywhere and what’s been described is unacceptable. Our team has been in contact with Ms. Robinson and following her reports, we permanently banned the rider accounts from the Uber app. We will fully cooperate with law enforcement and will provide information to them that would be helpful for an investigation.”

Robinson was critical of Uber’s efforts, saying she was told the case was closed. “There’s no program in place,” she said, adding that drivers cannot carry guns, knives or even Mace. “They don’t want you to protect yourself and they aren’t protecting employees.”

On May 14, a Tarrant County grand jury indicted Garefos for aggravated assault with a deadly weapon. Mosley was not indicted, even though he threw a bottle at Robinson’s head. Atty. Taylor said they have not filed a lawsuit yet. Uber’s response is important. “There should be safeguards in place,” he said. “Employees must be protected. And Ms. Robinson is not the first employee to speak out about assaults by passengers.”

There have also been assaults involving drivers. A representative responding to email requests decried the assault on Robinson, calling it unacceptable. When asked why she continues driving for Uber, Robinson said, she likes the flexibility and freedom. Also, she asked, why should she quit? Instead “Uber needs to make some changes.”

According to the spokeswoman, Uber has a team dedicated 24/7 to investigate specific reports and will remove an individual’s access to app if they violated Uber’s Community Guidelines. They also have many of the same transparency and accountability features that riders do, such as feedback and ratings for every trip and there is a GPS record of each trip. Unfortunately, nothing helped Robinson on that fateful night.