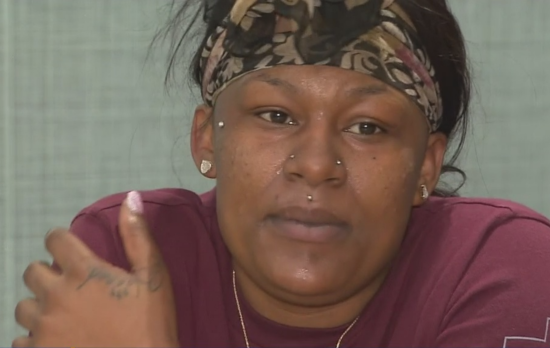 “The world is in the condition
that it’s in because the world
disrespects women.”

In the early hours of the morning Thursday, March 21, 2019, a Black woman, L’Daijohnique Lee said she feared for her life, as she suffered a heinous assault by a gun-wielding White male, identified as Austin Shuffield, in the Deep Ellum section of Dallas, TX. The cell phone video of Shuffield knocking Lee’s phone out of her hand and punching her repeatedly has gone viral. During the attack, Lee said she was attempting to call the police after Shuffield brandished a weapon and then shouted racial slurs because of the way she parked in a space.

Lee was brutally beaten by the man, culminating with her hospitalization for cranial swelling and post-concussion syndrome. Shuffield was arrested and charged with misdemeanor charges: assault causing bodily injury, intoxication, and interfering with an emergency call, of which he was released from jail, shortly after, on $1500 bond. The Dallas community was responded immediately with outrage; resulting in numerous protests because he did not receive felony charges for the assault, the presence of a firearm, and the hate speech toward Lee. This is just one of several incidents in recent months which by way of cell phone videos show Black women being attacked with no one arriving to aid them.

Throughout social media and the Black community alike many are beginning to wonder why Black men standing by while Black women become targets of verbal and physical abuse. Attorney Lee Merritt, who has been retained to represent Lee, called men to action to show solidarity with Lee. He posted via his social media platforms,

“The black woman is the most unprotected person in America.” —Malcolm X.

“If that is the case, it has to change. I’m calling on black men to stand with me and to stand up for the equal protection, respect and support of our women. This is not just a rally or protest. I am calling for a community forum where we pool together our skills and resources to lay out a specific plan to ensure our sister Dai Lee gets justice and to prevent any incident like this from happening again. This is our community. These are our women and #ITSONUS!”

Protests and rallies have been held to ensure Shuffield is re-arrested and re-charged. Late on March 28, felony charges were filed against Austin Shuffield for his alleged attack on L’Daijohnique Lee. Atty. Merritt said this via his social media accounts, “We are pleased to learn about the additional felony charges against Austin Shuffield referred to the Dallas County District Attorney’s office by the Dallas Police Department detectives.

Lee will fully cooperate with District Attorney John Creuzot who has indicated he would like to interview her directly in order to ensure a thorough presentation to the Grand Jury. Merritt believes that hate crime charges will be added when DA Creuzot interviews Lee. Some say additional details from the DA investigation will warrant hate crime enhancements as well.

Men have been active throughout Dallas coming to the aid of Lee. Activist and Minister Dominique Alexander, of Next Generation Action Network, is one the leaders of such protests and community activity. “Austin Shuffield was a known neo-Nazi. There is a root to Austin Shuffield, he felt like he was going to get away with it, he felt like he had the authority to beat that Black woman down,” said the minister at a protest at Dallas City Hall. According to the Minister, so many times the “city of Dallas makes people think that when the videos go viral it is an isolated incident, but that these are not isolated incidents.” He continued, adding that his organization has become a hotline of sorts, getting a barrage of calls in regards to similar racist attacks that he says city officials are not much concerned with. “This city is made of companies worth over a trillion dollars, and the city can’t seem to address simple humanity,” Min. Alexander said. He said he wants Blacks to be able to walk down the street like their White counterparts, and until that happens protests will continue until Black women feel safe in the Deep Ellum district and everywhere else.

As far as protecting Black women from attacks, long-time Nation of Islam student captain, Dennis Muhammad, says men must be retrained. Muhammad trains men to help protect communities all across the country with his Peace Keepers organization. Referencing the Dallas assault, the brutal attack of the elderly Black woman on the subway in New York where she was kicked repeatedly by a Black man, and incidents involving the assault of Black women in McDonalds and other places; Muhammad had this to say, “For the last maybe six months we have watched an increase on the attack of women, particularly Black women. We are seeing in my opinion not that you can just punch, kick and assault a Black Woman but you can be assured a Black man ain’t doing a damn thing about it.” He continued, Everyone of us who are men cringe when we look at those videos. We all say ‘it would not have happened if I was there.’”

Capt. Muhammad said often you see Black men in attendance in these videos standing by as Black women get brutally attacked. He says the current climate bears witness to why the Hon. Min. Louis Farrakhan called on 10-10-15 for 10,000 Fearless Men. “We have not heeded his call so now we are suffering. Now we see that if we would have organized 10,000 Fearless Men in every city almost four years ago then we could have been a great deterrent to some of these assaults on Black women.” the veteran Nation of Islam captain said. Davonte Peters is a hip-hop activist and candidate for Dallas City Council representing District 3 and he has been on the frontline of the protests and rallies for justice for Lee. He said he thinks the effects of slavery are alive and well and why some men are not standing up. “We are in the process of getting our mind right from institutional racism as men, but we must, in making sure they are safe we are helping to assist them in becoming armed, if Black men are not present so they can defend themselves,” said Peters, adding that he thinks Willie Lynch is a huge weapon in the crippling of some Black men.

“It is a lack of respect and unity, Willie Lynch, people debate if he existed or not, that Lynch syndrome is affecting us, where we are divided and conquered and disrespectful of our women ourselves so I believe with a lot of the men standing by this is what stops them from acting.” Peters says his generation has very little respect for women, and work has to be done to change this so Black men will act on behalf of their women. Dr. Brenda Wall is a clinical psychologist, who has studied for close to 40 years the plight of Black people in America and how Blacks deal with the mental pain of racism. She gave an analysis on how the Black woman has been under terror since she got to America. “Black women have been under attack since we got here, it is an American culture. I think it is becoming more prevalent with others seeing how we treat our women and girls.” Dr. Wall emphasized that Black men have not stepped up to do what should be done to be in unity with Black women because the effects of slavery are alive and well for Black men and women. “It started over 400 years ago with their evil and inhumane treatment of us and we certainly see the residual impact on our families and community today.” Dr. Wall pointed out that sometimes the horrors of the Black experience in America will immobilize and restrict one from acting even when they know they should. Could this be why Black men are seemingly standing by in this new viral age as women are being berated and assaulted?

“We have to look at the shock value when a weapon is involved, that puts the mind in crisis mode, and people are not likely to interfere without being trained to do so, as well as recognizing the trauma and systematic assault on a unique people,” said the doctor, as she cautioned taking into consideration what the Black man’s over four century treatment in America has been like, and that it does affect his ability to act. “Our family structures have been destroyed, and many or our men have been abused, or have witnessed abuse, this immobilizes action as well. We have to have family structures that are free of violence of any kind. It reminds me of one my favorite lectures by Minister Farrakhan where he said his children never saw violence in the house. We need this” said Dr. Wall.

“Eight women a day are abused, 1 out of 3 women are physically or sexually assaulted on a global scale, that is rooted in how the world sees women. We must change that to help get to a solution.” Capt. Muhammad pointed to media involvement in the violence we see. “Worldstar has made acts of violence entertainment, our young people see that the more you video tape these things the more popular you get. We need to shut Worldstar down and any other platform that allows this. We need to push a law that says if you record acts of violence without simultaneously calling 911 you will be charged with aiding and abetting a criminal.”

Muhammad said that while it is painful, these attacks present a great opportunity to organize and mobilize Black men. He, along with the Peace Keepers will be in New York working to make neighborhoods safer for the next upcoming months. Nation of Islam’s Muhammad Mosque No. 48 plans to help the community become safer. Alshaheed Muhammad, student minister of the mosque said, “As The Hon. Min. Louis Farrakhan has said we must make our communities a decent place to live. It is a lack of training in our community, we are not trained to protect ourselves, The Nation of Islam has a track record for the last 88 years with training men to defend and respect our women. Here at Muhammad Mosque 48 we do have a plan of action to protect our women,” J Prince, hip-hop mogul, and founder of the Houston’s Rap-A-Lot Records took to his Instagram with what seemed to be outrage in regard to the assault of the Lee, saying, “In a nut shell, all I’m saying is Men, let’s protect our women and let’s create a movement called #BeatAMansAssThatsCaughtBeatingOnWomen.