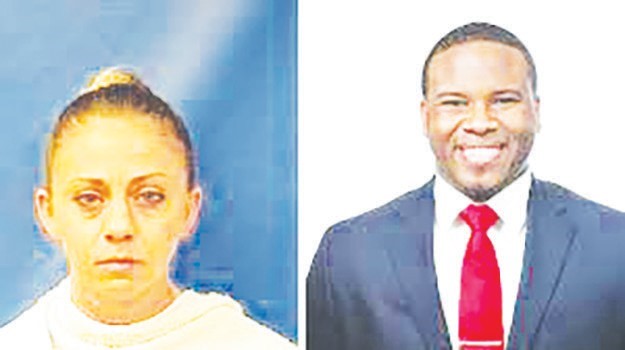 Not Again. Not another hashtag!”

That’s the cry around the country and now across the waters as many heard the news reports that yet another unarmed Black man had been gunned down by a police officer on Friday, September 7.

Dr. Frederick D. Haynes of Dallas’ Friendship-West Baptist Church said he was in South Africa when he and others heard that Botham Shem Jean was in his home when an intruder, Dallas police officer Amber Guyger, entered the premises and shot the 26-year-old PricewaterhouseCoopers analyst.

“People are wondering, ‘what is going on,’’’ said Dr. Haynes as he stood with other members of the African American Pastors Coalition (AAPC) in front of the Dallas Police Department Headquarters, as they prayed for the Jean family, answers, transparency, the Chief of Police U. Renee Hall, the city and yes, Officer Guyger.

“Our community is sick and tired. All I’m hearing is the mystery surrounding the circumstances. We are concerned about ‘Blue bias.’ We want this (shootings of innocent Black men and women) to stop. We want to be served and protected by the police department!”

It was a somber Pastor Bryan Carter who talked about the shooting of the Saint Lucia native who attended college at Harding University in Searcy, AR and was “heavily involved” in his church, West Dallas Church of Christ.

”We’re encouraging peaceful dialogue, but demand justice and answers,” said Pastor Carter, who is the senior pastor of Concord Church in Dallas, and president of (AAPC). “We expect justice to be carried out. The officer has to be held accountable and we want justice in every way.”

Pastor Carter also acknowledged that there has been communication from a diverse community of spiritual leaders who are just as concerned and have offered support. Church of Disciples United Methodist Church Senior Pastor Quida Lee called for an end to division and divisiveness.

As Dr. Sheron Patterson lifted up everyone involved and addressed the many emotions surrounding the situation she acknowledged that “these are perilous times” but added that “all is going to work out for the good.” The daughter of a former police officer, Dr. Patterson is senior pastor of Hamilton Park United Methodist Church.

The mystery referred to by Pastor Haynes was further enhanced by the many narratives, reports and speculation, including several accountings of what actually happened, said many in attendance.

What is known as fact, however, said Minister Alexander, the co-founder of Next Generation Action Network, is “early Friday morning on September 7th Amber Guyger of the Dallas Police Department walked into the Southside Flats where she lived, proceeded to Botham Shem Jean’s apartment, and fatally shot him.”

On that fateful Friday, Chief Hall addressed the media and said Officer Guyger had submitted a blood sample and based on preliminary investigation a manslaughter warrant was being prepared. She then said the Texas Rangers had been called in to take over the investigation. In the meantime, Officer Guyger remained at large, which became a source of contention for many.

It wasn’t until Sunday evening that she turned herself in and shortly afterward, less than two hours, she was released from the Kaufman County Jail. Her bail had been set at $300,000.

Dallas NAACP 2nd Vice President KC Fox, who is also a former police officer, talked about understanding procedures, but also called for justice and an end to the violence. She was joined by national board member Bob Lydia, who is also 1st Vice President of the Texas NAACP. He said the civil rights organization is calling for the Justice Department to step in and take leadership.

Other pastors offering prayers and expressing the need for justice in this case and end to the shootings, included Pastor Rickie Rush, Pastor Vincent Parker and Dr. Marcus King.

The pastors said they would continue to work with the Mayor, Chief Hall and the District Attorney’s office to ensure the concerns of the community are addressed. “We cannot allow the death of this young man to be another statistic, said Pastor Carter, “but instead demand that justice be served.”

According to Pastor Carter, when his congregants came to church on Sunday morning, many were angry and frustrated. “They wanted answers.”

Five days later that’s still what people are asking for. One bystander said all the different stories give new meaning to the phrase, “fake news.”

And Dr. Haynes issued a challenge to Dallas Cowboys owner Jerry Jones and quarterback Dak Prescott, who both provided different narratives for free agent and international ‘hero’ Colin Kaepernick “taking a stand by kneeling during the National Anthem. This is why we support Kaepernick.”

He called on the two to say something about the shooting of Mr. Jean. Later that evening citizens gathered again outside the DPD headquarters, calling for justice and accountability.

Congresswoman Eddie Bernice Johnson released a statement regarding the ongoing investigation at the Dallas Police Department: “This has been a difficult time for our community. I agree with the decision Chief Hall made to turn over the investigation to the Texas Rangers. Although this process is expected to take time, I am confident this review will prove both independent and thorough. This action by Chief Hall, I hope, will give the community assurance that justice will be sought without bias, and no one will be shielded from facing accountability or responsibility for this tragic situation.

“I request all to join me in keeping the family of Botham Jean in our prayers.”

The Texas Rangers have since referred the case to Dallas County District Attorney’s office where DA Faith Johnson said a full investigation will be conducted and that a charge of murder is still possible. The decision will come from the grand jury.

Representing the Jean family are Lee Merritt, Daryl Washington and Ben Crump. According to Attorney Merritt, the last words of Mr. Jean are believed to be, “‘Oh my God, why did you do that?’”

Anton Edmunds, Saint Lucia Ambassador to the US and Saint Lucia Prime Minister Allen Chastanet met with Dallas Mayor Mike Rawlings and members of the family, friends and media as they also sought answers.

Sr. Editor Eva D. Coleman met with Mr. Jean’s mother, attorneys and dignitaries from his home. She described her experience.

“I met Botham Jean’s mother, Allison Jean, today, she said. I couldn’t bring myself to take her picture.

As a widow, I know the feeling.  I know ‘the look.’ There’s an emptiness and hollowness that comes with losing someone so close. I gave her a hug and quietly prayed for peace and mental stability during our embrace. “I greeted and briefly spoke with super attorney Ben Crump, who is in town. He is synonymous with The Movement.”

While Ms. Coleman already knew Atty. Crump, it was her first introduction to Prime Minister Chastanet and Ambassador Edmunds.

“Although they’ve been here to support the Jean family, there are still no answers,” she continued. “I think we all were walking around like zombies. This is so much bigger than a hashtag. The only truth we know is that Bo (Mr. Jean) is gone.”

Harding University issued this statement: The Harding family learned this morning of the tragic death of 2016 alumnus Botham Jean who was shot in his home last night. Originally from St. Lucia, Botham was a member of Good News Singers, a resident assistant, an intern for the Rock House campus ministry, and a leader in Sub T-16 men’s social club.

Botham frequently led worship for chapel and for campus events such as Uplift, and this morning, President Bruce McLarty shared his favorite memory of Jean with students in chapel.

“At Lectureship one year, I asked him to lead singing one night. Because of the subject, there was a particular old hymn that I asked him if he would mind leading,” McLarty said. “He didn’t say anything about not knowing the song, but he had never heard it before in his life. He came up that evening and was just smiling and excited about leading it. He told me he had never heard the song before, but that day, he called back to St. Lucia and asked his grandmother to teach him that old hymn on the phone. So he shared it with us at Lectureship that night, and it was a truly special moment.”

The entire Harding family grieve today for the loss of Botham Jean, who has meant so very much to us.
Please join us in praying for Botham’s friends and family.

Who was this man, whose life was snuffed out? On his LinkedIn account, he describes himself as: “Aspiring young professional, engaged in developing a career built upon integrity, dedication and relationships, leveraging useful technologies to gain an understanding of and add value in a range (of) industries, striving towards leadership in my career, my community and society.”