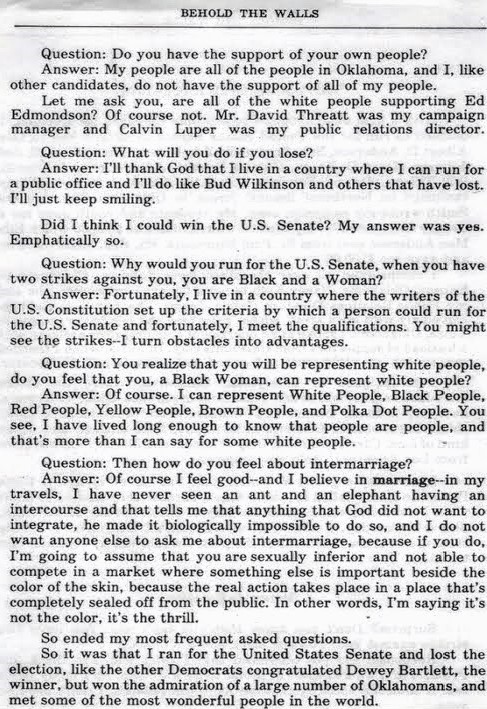 I woke up the morning of Aug. 19, 2020 knowing the day was significant for many reasons, but the way the dots have connected for me has meant much more than I thought. This night, Kamala Harris made history as she accepted the Democratic nomination for Vice President of the United States. Because of race and gender, the political aspirations of many sheroes were never realized, but their dreams, vision, and intention to make America live up to its ideals absolutely paved the way for this moment. The fact that Senator Harris’s acceptance happened on August 19 is surreal for me.

Sixty-two years ago to the same day (two years before the sit-ins in Greensboro, North Carolina that are widely credited as the first), my mother, Clara Luper, the Oklahoma City NAACP Youth Council Advisor, led 13 youth on a sit-in protest at Katz Drug Store. After just two days, Katz not only integrated the lunch counter there in Oklahoma City, but their protests led to the integration of all 38 of their stores—across four states. Over the next six years, Luper would be arrested 26 times for protesting segregation and other racially-based discriminatory laws and practices throughout Oklahoma and the nation. She participated in every major civil rights march, including Selma and Washington D.C.

While civil rights protestors are largely celebrated today, my mother used to tell me about the criticism she received from both the White and Black communities. Beyond the criticism, she literally put her life on the line for equality and access. Shotgun shells were thrown in her home, her windows were constantly broken, furniture set ablaze. She was followed, received daily threatening letters and calls with promises to harm her and her family, not to mention the pressure by the school board (whom she referred to as a true demonstration of “white power”) to stop engaging in protests.

The “Freedom Center,” where she and the Oklahoma City NAACP Youth Council operated from, was literally destroyed to the ground by a bomb. She sacrificed much. Throughout her life, she saw much of the worst in humanity. She was born two years after the Tulsa Massacre and grew up not far away in Okfuskee County. She used to tell me about having to go into town to get things and how she hated it because of the way she and her family were treated.

The closest town was Henryetta, and right outside of town a sign was posted that said, “Negroes Read and Run. If you can’t read, run anyway.” The town made it clear that they wouldn’t wait until sundown to handle any Negroes that got out of line. Her brother, Ulysses, survived World War II only to die of pneumonia as the hospital in Henryetta refused to treat him because he was Black. Nevertheless, she held fast to the dream of America being what America could be. In 1972, Clara Luper ran for the U.S. Senate seeking to represent Oklahoma. She was born, raised, educated, employed, and a life-long resident of the Sooner State, but she was most often asked if she could represent Oklahoma—her being a Black woman and all.

An excerpt from Clara Luper’s self-published 1979 book, Behold The Walls:

“When I traveled my state from one side of it to the other, and I looked at my white brothers and many of them told me, ‘Clara I just can’t vote for a Black person.’ I said, ‘Then vote for me.’ It was a funny thing, it was a funny thing, there were a lot of Black people that came to me and said, ‘Clara I just can’t vote for you because I don’t think you’re going to make it.’ And I said, ‘Vote for me even if I don’t make it, I would like to be the first one to lose the senatorial race in my state.’”

I’ve recently found a few of her old campaign brochures and flyers, most with her handwritten speech notes on the back (she always wrote her speeches on the way to the event, a gift I wish I had). Her campaign goals are the same goals we are still seeking today, 48 years after her U.S. Senate run—equity in education, access to health care, transformative justice, livable wages, etc. Had we heeded the call of Shirley Chisholm, Fannie Lou Hamer, Ella Baker, Clara Luper, and others—where would be today? Without question, I believe America would be so much better for so many.

Of course, she didn’t win that election, it was Oklahoma in 1972. Heck, it’s 2020 and we have only had two Black women U.S. Senators ever—Carol Mosley Braun (IL) and Kamala Harris (CA). My mother said campaigning across the state and engaging with so many people from all walks of life was one of her most treasured moments. She did not seek another office, but supported, encouraged, and volunteered on many campaigns after that, including Jesse Jackson’s 1988 presidential bid.

Clara Luper lived long enough to see then-Senator Barack Obama become President Barack Obama, even though she could hardly believe it. We often talked politics, and I especially loved getting her viewpoint on presidential elections. I told her I was campaigning for Obama. I was all in! She said, “The U.S. just isn’t ready.” I said, “Who do you think will win?” She said, “John Edwards.” You know I never let her live that down.

The Oklahoman interviewed her that November night in 2011, and she told the reporter, “I hadn’t planned on dying until I saw this day…if I die now, I’m OK.” By then, time and health had given her some challenges and mom wasn’t able to stand or move about without assistance, but, as also written in The Oklahoman, “The night that Obama was elected, [Mrs. Luper] stood. She got up for the first time in two years and stood by herself.”

Before my mother led those 13 kids to sit-in at Katz that evening, she remembered her father saying all those things he wanted to do, like take her to the zoo or to a restaurant for dinner. But they were Black Americans living in a segregated Oklahoma, and those fatherly wishes were not to be. As a little girl, Mom would often ask her father when they could do those things, to which he would reply often with tear-filled eyes, “Someday.” On Aug. 19, 1958, I think my mother saw in the faces of those kids’ mirrors of her own childhood impatience and said to herself, “Someday is tonight.”

On the evening of Aug. 19, 2020, I watched Kamala Harris give her acceptance speech. In my mind, I replayed conversations with my mother about Black women and politics and the US not being ready for us. I thought about the missed opportunities to be a better nation, because of our dismissiveness toward Black women. In Senator Harris, I envisioned all of the Black women who had the intelligence, vision, qualification, desire, and ambition to create a more perfect union through direct involvement in the political system. The Black women who challenged the suffragists who tried to bar them from marching.

The Black women who escaped North and those who struggled and survived all merged in the moment. I saw them all gathered around like great Olympians of bygone years, passing the torch to a new generation because the marathon continues. And after all that, I looked at the faces of my own children and through smiles and tears told them, “Someday is tonight.”

Chelle Luper Wilson, a motivational speaker, entrepreneur, and philanthropist, is a contributing editor and columnist for I Messenger Media. She is also the president of the Clara Luper Legacy Foundation and the International Secretary of Alpha Kappa Alpha Sorority Inc.