The Scott Joplin Chamber Orchestra (SJCO) is one of the nation’s oldest contemporary majority African American community orchestras. It was formed in 1983 under the umbrella of Community Music Center of Houston (CMCH), a 501(c) (3) non-profit organization, by its Music Director, Anne Lundy, for three purposes: (1) to give African American instrumentalists opportunities to perform together; (2) to explore and perform music written by Black composers; (3) to be an example to the Black community that orchestras can include people that look like them.

Since its inception, SJCO has performed both mainstream works such as Handel’s “Messiah” and beautiful little known music by Black composers. These pieces have included works by African Americans as well as African-French, African English and African-born composers, some of them world premiered by SJCO. Though most performances have been held in Black churches, a few concerts have also been performed in renowned venues and in front of some of the biggest audiences.

The issue of including Black instrumentalists in the world of symphony orchestras remains the focus of the SJCO. The Scott Joplin Chamber Orchestra evolved from Anne Lundy’s awareness that African American musicians rarely get the opportunity to play in string orchestras and her revelation that there were many pieces written by Black composers for orchestras and these pieces were seldom played.

In 1982, Lundy, who had established the William Grant Still String Quartet in 1981, called together for 25 Black string players for a concert at Houston’s Good Hope Baptist Church. In 1983, after accepting the position of Music Director for the Community Music Center of Houston (CMCH) and because of the success of her first concert, Lundy formalized the orchestra under the name of The Scott Joplin Chamber Orchestra. Other Black churches began to call such as Antioch Baptist, Wheeler Ave, Baptist, and Trinity East Methodist among numerous others.

In 1986, CMCH’s Martin Luther King, Jr. Birthday Celebration orchestral performance of “Free At Last” grabbed such public attention that it served as the theme of Dan Rather’s CBS Newscast that day. The orchestra and the Houston Symphony had a joint rehearsal in 1988 which led to July 1, 1989, William Dawson Concert. With this, Anne Lundy became the first Black woman to conduct the Houston Symphony Orchestra. A second joint concert with Ms. Lundy conducting was presented in 1990.

In 1991, CMCH presented the first major Juneteenth concert to be held indoors at Houston’s Wortham Theater. In 1995, the daughter of William Grant Still who is considered to be the dean of African-American composers so appreciated CMCH that of all the national 100 birthday, she chose to celebrate his birthday with a workshop and a performance of his music performed by CMCH’s Scott Joplin Chamber Orchestra.

In later years, the orchestra began touring and performing at major national events. Some events were the Links National Conference and, in 2004, Super Bowl XXIII, where the orchestra accompanied vocal artist Beyoncé singing the national anthem. Lundy, the Community Music Center of Houston (CMCH) Music Director, is a native Houstonian who began her musical studies on the violin. She received her Bachelor of Music Education in 1977 from UT Austin and her Master of Music in Conducting Performance from the University of Houston in 1979. Currently, she is finishing work on her Doctor of Musical Arts (DMA) at the University of Houston. In 1990, she became the first Black woman to conduct the Houston Symphony in a performance at Houston’s Miller Outdoor Theater.

The South Dallas Children’s Choir of The African American Museum was established as a result of the Museum’s long-running award-winning Summer Camp three years ago. Choir members range from eight to 15. The South Dallas Children’s Choir is dedicated to the philosophy that through the learning and performance of excellent choral literature, the lives of the choir members, as well as the lives of their families and the community, will be enriched-artistically and personally.

The Choir has performed at The Fair Park Blues and Jazz Festival, the opening of The 2015 State Fair of Texas, The University of Notre Dame Choir, and The Annual Martin Luther King, Jr. Candle Lighting Ceremony. The Orchestra’s appearance benefits The South Dallas Children’s Choir. The Dallas appearance of the Orchestra is sponsored by The Museum’s Friends of Music. 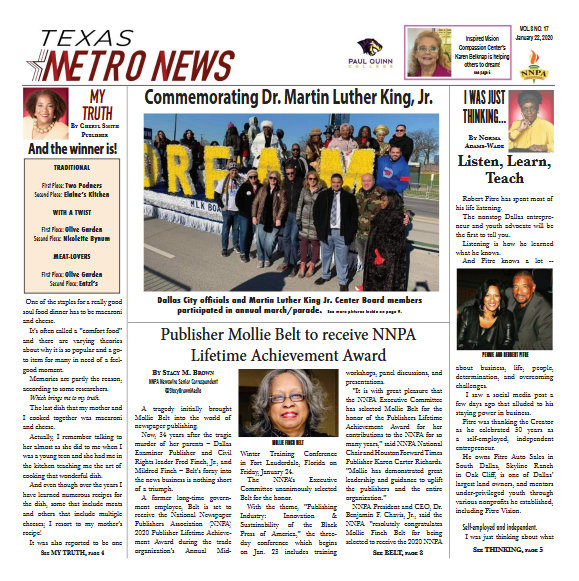 About Your Hair: Make-Ready Grooming by Dr. Linda Amerson

From the Capital: Stop Chemical Pollution! by @RepEBJ