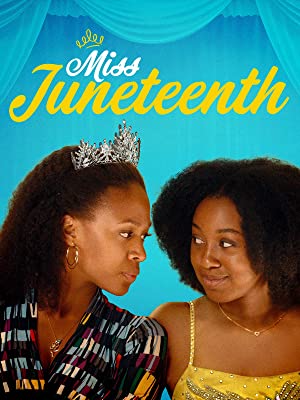 Miss Juneteenth is a labor of love for first-time director and Fort Worth native, Channing Godfrey Peoples. She is also the writer and producer of the film, all while recently giving birth and undertaking the role of a mother. The movie is a stirring story of a single mother, played by Nicole Behaire (The Jackie Robinson Story). A former Miss Juneteenth herself, she tries to get her teenage daughter, Kai (Alexis Chikaeze), to fulfill the dreams that never came true in her life. The movie follows two plotlines. One is of the traditions of Juneteenth in Texas and the pageant, and it also tells the story of Turquoise Jones trying to get her rebellious daughter on the path that will lead her somewhere in life, unlike the heartache she suffered in hers with a good-for-nothing ex-husband and having to work at several jobs just to keep the lights on.

The movie does a good job of drawing the parallels that Texas slaves went through having their emancipation delayed two years and Turquoise’s dreams being delayed by a series of setbacks she’s faced in her life. Miss Juneteenth is a gut-wrenching story that will move you to tears. Director Channing Peoples does an excellent job of taking you on a rollercoaster ride of emotions throughout the movie. I also have to mention local actress Liz Mikel who works with Turquoise at Wayman’s BBQ and Lounge. It’s a real “Texas Joint” that adds a big helping of Texas realism to the film (which takes place in Fort Worth). Miss Juneteenth is a major motion picture, playing and receiving recognition at both the Sundance and SXSW film festivals.It cost me about $7 and I watched it on Fandango PPV. It’s also playing at The Grand Berry Theater in Fort Worth. The movie is not rated and has a run time of 1 hour and 43 minutes. The emotional story moved me and the movie kept me entertained. I loved it! On my “Hollywood Popcorn Scale,” I rate Miss Juneteenth a JUMBO.