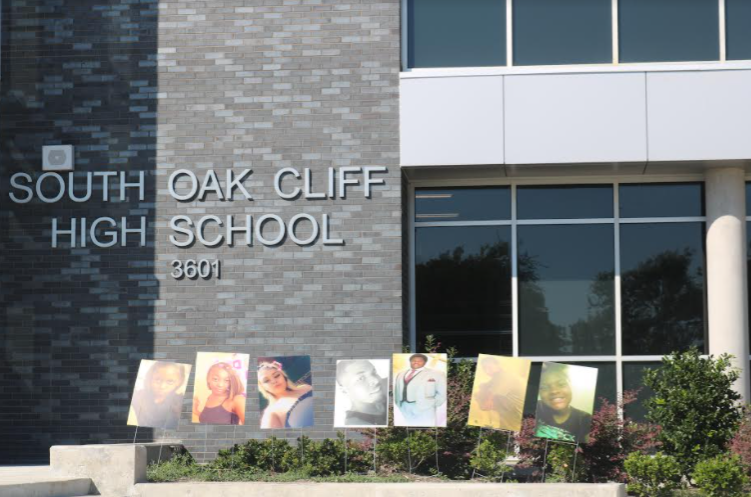 OAK CLIFF, TX–Dallas Mayor Eric Johnson said he’s had enough of the hashtags and the cries of people who lost loved ones to violence.

Standing in front of South Oak Cliff (SOC) High School, where large photos of deceased Black men and women were featured, the mayor discussed public safety initiatives and announced that the City of Dallas and Dallas Independent School District has partnered together to support four of the mayor’s task forces to make Dallas a safer place.

Joined by DISD Trustee Maxie Johnson, SOC principal Dr. Willie Johnson, co-chair and member of the Mayor’s Task Force on Safe Communities Rene Martinez and Derrick Battie, Johnson said it’s not just about law enforcement and the justice system being fair but it’s about the community looking out for one another.

“In my time as mayor, I’ve come to understand that our city needs to do more, much more to focus on the priorities of the people of Dallas,” Johnson said. “Public safety must come first.”

The mayor’s task forces will be prioritizing areas geographically to make the most impact.

The City of Dallas has allocated nearly $4.5 million in the budget that will go to three of the four task force recommendations. $1.7 million to focus on lighting, vacant parking lots and abandoned buildings, while violence interruption programs will be allotted $800,000.

Acknowledging that 465 kids were employed from the Dallas summer’s job program and that was the highest number from previous years, Johnson said the budget allows for $500,000 towards youth services in the city.

In light of The New York Times report stating that Dallas has the highest murder rate for a major city in Texas, the mayor said, “Violent crime remains unacceptably high in our city.”

With the emphasis placed on the work of the task forces, however, the future looks optimistic for Dallas residents. “Today is an occasion to celebrate, we are no doubt, still far from where we need to be.”