Tallahassee has a crime problem and Dallas native Royle King, Jr. is the man recently tapped to turn things around for Florida’s Capital.

Joined by the Mayor, County Commissioner, Sheriff, School Superintendent and other partners at a press conference Monday, King was introduced as the Executive Director of the Council on the Status of Men and Boys (CSMB).

The Council is the result of years of research presented in the Leon County Sheriff’s Offices’ Anatomy of a Homicide Report that focused on the crisis in Tallahassee, with homicides and non-fatal shootings.

In introducing King, Sheriff Walter McNeil talked about the number of people killed in Tallahassee and expectations for the Council.

“It is our hope and prayer that this effort makes an imprint, a change in terms of the violence that we’ve seen across our community for far too long,” he said. “We started a research project going back over the past five years, looking at shootings and how to bring an end to all the shootings and deaths.”

Saying they chose the right person, the Sheriff continued, citing poverty, health disparities and trauma that “impact disproportionately so many of our African American” youth.

“The impact he has made with the Lamplighters… he’s doing a lot of what we talked about today. He is ready for this challenge!”

He continued, “Based on his impressive background and passion for changing young lives, King is the perfect choice to lead the Council on the Status of Men and Boys. His own experiences of dealing with the tragic shooting of one of his mentees, in addition to playing a crucial role in guiding hundreds of others to graduate from high school and lead productive lives are all key to this Executive Director role.”

Currently the Volunteer Services Manager for Leon County, King is the founder and executive director of the mentoring program for young men, Omega Lamplighters; a group that has grown across the country and most recently established a chapter in Naples, Italy.  That group actually added on a young edition, with the Junior Lamplighters; reaching another demographic that was definitely in need of mentoring.

King attended Lincoln Humanities and Communications Magnet High School with his focus on a career in television and broadcasting.

With both parents as graduates of historically Black Colleges and Universities (HBCUs), King said there wasn’t much resistance when his mentor encouraged him to attend her alma mater, Florida A&M University (FAMU).

“That individual and that program changed my life,” he said.

As the director of the program that trained high school and college students on the basics of journalism, Smith told the students if they wanted to be great, they needed to go to FAMU, King recalled.

Interestingly King, like his mentor when she first arrived at FAMU, thought he was going to be surrounded by beaches and fun in the sun days once class was over.
Surprise, the closest beach was just over 100 miles away in Panama City.

Still his mind was made up. And he had his parents’ approval.

“It was one of the best decisions he could have made,” said dad, Royle King, Jr., who has watched his son excel in several areas professionally, socially and throughout the community, even back to his youthful days as a member of the Omega Sparks in Dallas. “We’re very proud of him and the work he continues to do.”

It’s that work, and work ethic that King, Jr. plans to bring to the Council.

Chairman Bill Proctor of the County Commission said he wants to see a change occur.

“Mentoring, outreach and caring; this is a model,” he said. “Please give this a chance. Give it your support!”

Acknowledging the excitement of the announcement and opportunity, he pointed out that to make a change is a collaborative effort.

“It’s not going to happen overnight,” he said. “It’s going to be a lot of work, but we’re ready. I’m ready. Everyone here is ready, and we’re going to do it. We’re committed to changing one male at a time.”

King continues to make headlines.  Just last week, he was named Undergraduate Advisor of the Year for his work with the Upsilon Psi Chapter of Omega Psi Phi Fraternity at FAMU.  Recognized at the national convention held in Charlotte, NC., the chapter also walked away with three other honors, a first for the 111-year-old public service organization.

He holds a bachelor’s degree in broadcast journalism from FAMU and has earned several awards as a student and since graduation. While at FAMU he served as Basileus (President) of the fraternity and he has held that position for the graduate Omega chapter, Chi Omega.  King has also held various positions of leadership in the fraternity.

Known for being charming and charismatic with a sense of humor, King thanked his family, fraternity and friends while also praising his current supervisor.
“It’s not every day you send your best worker to go work somewhere else!”

In this article:Andre Daron, Council on the Status of Men and Boys, featured, Royle King 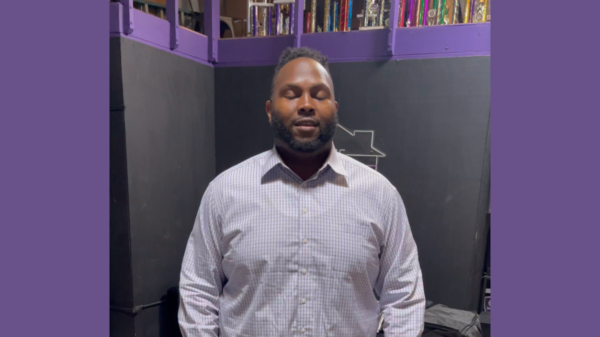