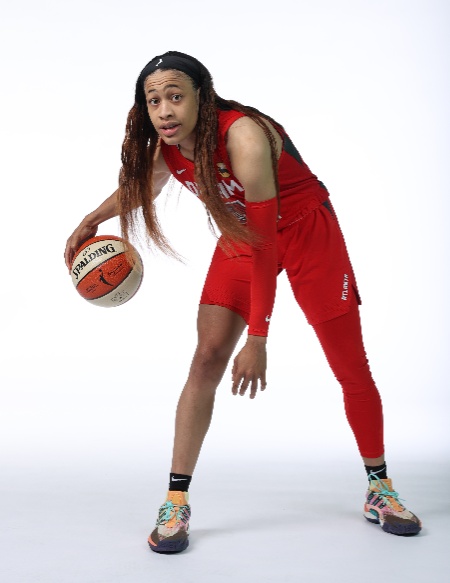 Chennedy Carter is living the Dream; literally. The spectacular guard out of Mansfield Timberview and Texas A&M went number four overall to the Atlanta Dream in this year’s WNBA draft. She’s now living her dream of playing professional basketball in Bradenton, FL where all 12 teams in the WNBA are housed in a Bubble—one single site—to play a shortened 22-game season. The Bubble is in response to the Coronavirus pandemic which continues to spread throughout the nation. “It’s a bit of a journey and a step for me but I’m just taking it one day at a time,” she said recently, after practice from Florida. “I’m honestly blessed to even be in this position. I’m the youngest on the Atlanta Dream so it’s a blessing to even be here.” The 21-year-old Carter, who goes by the nickname “Hollywood,” is A&M’s highest draft selection in the program’s history. Per the WNBA, there have been 13 Texas A&M players selected in the history of the WNBA Draft, with Kelsey Bone being the highest pick at number five in the 2013 Draft by the New York Liberty. She also comes from a line of professional ballers. Her second cousin is former WNBA All-Star Jia Perkins, a champion with the Lynx in 2017, and her godfather is longtime NBA guard Jason Terry, who won a championship with the Dallas Mavericks in 2011.

Because the players will be away from home for at least the next two to three months, many brought items from home to give the Bubble a more personal feel. Carter was no different. “I brought my PS4. My game system is very dear to me because I like to get on Disney Plus,” she admits. “I’m a big (NBA) 2K girl too, so I’m pretty set in my room with movies and games.” She keeps in touch pretty regularly with family and friends back home in Texas. “They call me about every day. They want to know what’s going on. Having a friend that’s in the professional league, playing against the best players in the world, that’s really amazing to them,” Carter said. I try to give my friends and family the inside scoop of how I’m doing every day, how’s practice going, just how am I getting along with everything. I’m loving it so far. Carter also reflected on the unprecedented challenges the world is facing including the Coronavirus pandemic and the Black Lives Matter protests and nationwide racial unrest.

“I’m here just working hard. That’s how I’m getting through it. I know there’s a lot of things outside of basketball that our world is pushing forward, to get justice for different people and I’m doing that inside the bubble,” Carter said. “I wish I could be on the outside at some of the marches and to see some of the protests but it’s amazing to see how our world is trying to push forth change. We’re also trying to do that here in the bubble.” Carter said the WNBA players plan to wear Breonna Taylor’s name on the back of their jerseys this season. “We’re all in tune with making a change for the world.” Carter, who had one year of college eligibility left, finished her Texas A&M career with 1,983 total points—just seven points shy of being the top scorer in the program’s history. She holds the Texas A&M record for most 20-point games (62) and 30-point games (13), while also ranking in the top-six in field goals made (732, 3rd), three-pointers made (148, 6th) and free throws made (371, 3rd).