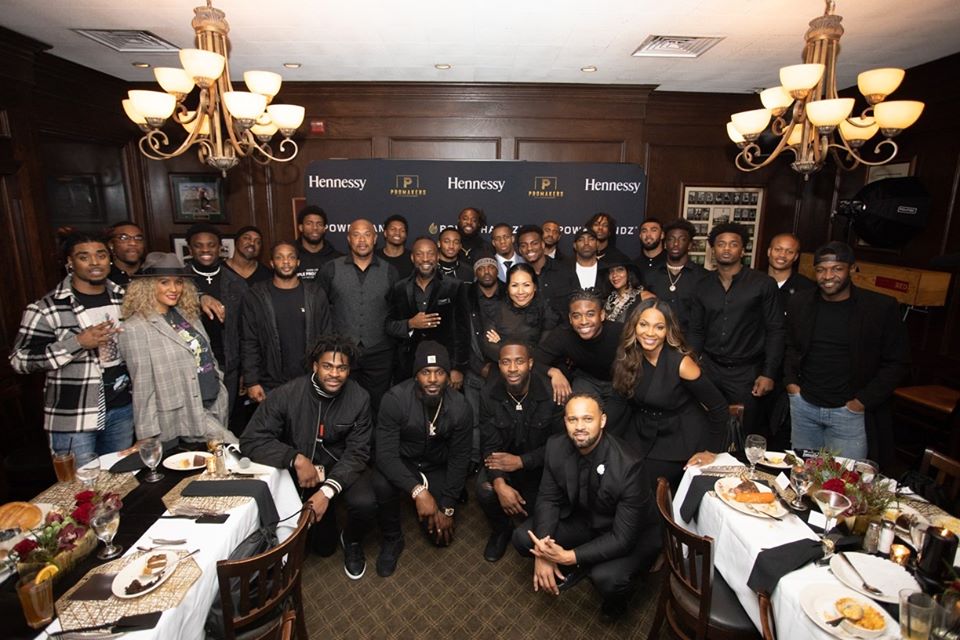 In celebration of Black History Month, POWERHANDZ (a global athletic training and rehabilitation product tech company), PROMAKERS and HENNESSY, the world’s leading cognac, presented The Power of a Dream dinner to 30 pre-draft athletes in an intimate setting designed by celebrity interior decorator Nikki Chu at Bob’s Steakhouse in Plano, Texas. While mingling, guests responsibly enjoyed Hennessy Ginger, Hennessy Tea or a Hennessy Sidecar at the private cocktail reception and after dining – Hennessy XO paired with their dessert.

The collaborative event saluted young athletes who have achieved the next step in their professional career with an evening program of mentorship, education and panel discussions led by NFL Players, Hall of Famers and other professionals specifically chosen to impart wisdom to the curated group of young men. “This opportunity is not just about you or the field, it’s about changing the community and transforming your dreams into legacy,” said Danyel Surrency Jones, Visionary of “The Power of a Dream” Dinner, CEO of POWERHANDZ and President of the Power to Give Foundation.

From transitioning the dream to training the dream to the power of a tribe, the seasoned panelists delivered a transparent discussion on the realities of NFL life on and off the field, in an artfully moderated discussion by event creator, Danyel Surrency Jones. Discussing everything from business acumen to financial literacy to family dynamics, mental health issues, external influences, agency inquiries and more – the pre-draft athletes were not only activated for their dreams but also empowered to think and envision beyond football. Above all, The Power of a Dream (as an honorable nod to the late Dr. Martin Luther King’s ‘I Have a Dream’ vision), was to inspire the athletes to evolve personally and professionally, on and off the field, and as men.

“There’s more to life than just football. I knew that there was life after football and I needed to take full advantage of it,” Darren Woodson said to the group, as he described the diversification of investments by NFL colleagues Deion Sanders, Michael Irvin, Emmitt Smith, Troy Aikman, and Jay Novacek. Brian Dawkins, who flew in especially for the event closed the discussion inspiring all to be examples of the dream and that, “Your character will take you further than your talent ever will.”

“A quote by Darren Woodson really stood out for me at the event,” said pre-draft attendee James Porche, wide receiver for the SMU Mustangs. “He said ‘People are going to love you for the time being, so take advantage of it during that time.’ It hit home to me because I know so many athletes who try to get their life going after football when the best time is to do it while you’re in it. Making it to the NFL is not just for football – it’s a platform – a key to access avenues in life you thought you’d never have access to.”