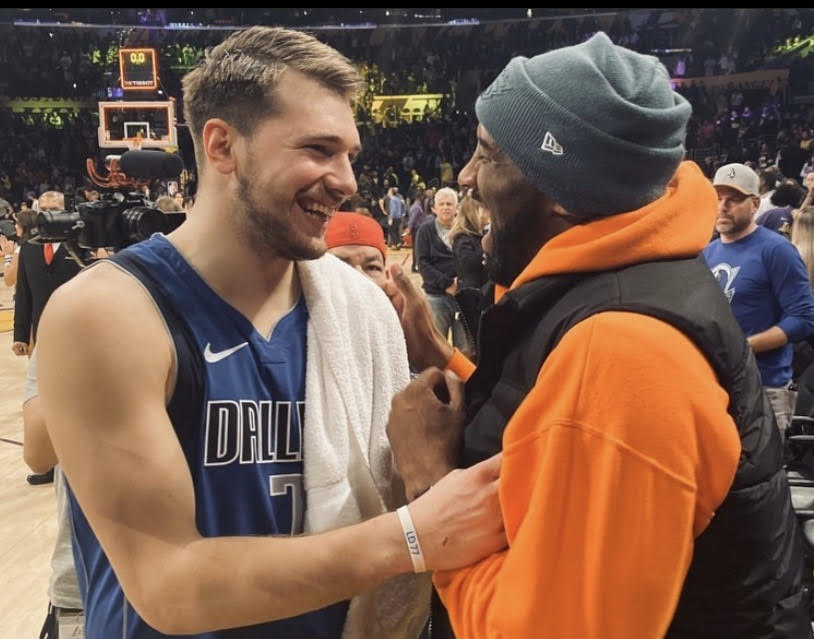 Photo Courtesy of the Dallas Mavericks

The Dallas Mavericks retired the No. 24 jersey, players of every professional sport poured out tributes on social media, fans held their loved ones a little tighter and the whole world froze on Sunday afternoon with the news of the death of NBA legend Kobe Bryant, his 13-year-old daughter Gianna and seven others in a helicopter crash in California.

Bryant, 41, was traveling in an S-76 helicopter Sunday when it crashed just before 10 am into a hillside near Calabasas, Calif., roughly 30 miles northwest of Los Angeles. The flight manifest listed nine people on board — one pilot and eight passengers. Immediately upon news of the tragedy, tributes began pouring in from all over.

“We are shocked and saddened by the devastating news of the passing of Kobe Bryant and his daughter, Gianna,” Dallas Mavericks owner Mark Cuban said in a statement. “Kobe was an ambassador for our game, a decorated legend and a global icon. Above all, he was a loving and dedicated father.” Cuban also announced the retiring of Mavericks’ #24 jersey.

“Kobe’s legacy transcends basketball, and our organization has decided that the number 24 will never again be worn by a Dallas Maverick. Our hearts go out to all the lives lost and the families impacted by this terrible tragedy. We send our thoughts and prayers to Vanessa and the family, the Lakers organization and Kobe Bryant fans everywhere.”

The Mavs were in Oklahoma preparing for a Monday game with the Thunder when news of the crash became public. Many took to social media to express their condolences.

MVP Candidate Luka Doncic wrote on Instagram: “Not you!!! RIP mamba! Thank you for everything you showed and did for the world.”

Doncic had recently met  Bryant and his daughter a month ago when the Mavericks played the Lakers.

Retired Maverick Dirk Nowitzki wrote a heartfelt letter on Twitter to Bryant: “Mamba – This is hitting me really hard. I will always remember coming home after games so I could watch you dominate in the fourth quarter! You inspired so many around the world, including me. You will always be missed. You will always be remembered. You will always be loved. Rest in peace with your angel Gigi. Deepest sympathies to Vanessa, the girl’s and all the friends and families of the lives lost today.”

Shaquille O’Neal, with whom  Bryant won three championships with on the Lakers, said: “There’s no words to express the pain I’m going through with this tragedy of losing my niece Gigi and my brother Kobe Bryant. I love u and u will be missed. My condolences goes out to the Bryant family and the families of the other passengers on board. IM SICK RIGHT NOW.”

NBA Legend Michael Jordan released a statement that read in part: “I am in shock over the tragic news of Kobe’s and Gianna’s passing. Words can’t describe the pain I’m feeling. I loved Kobe – he was like a little brother to me. We used to talk often, and I will miss those conversations very much.”

The NBA Coaches Association, of which Mavs Head Coach Rick Carlisle is president, released this statement: “The membership of the National Basketball Coaches Association joins the NBA family and fans across the globe in mourning the passing of Kobe Bryant and his daughter, Gianna. Kobe’s impact on and off the court has inspired countless people including so many of our current and former NBA Coaches. Our thoughts and prayers go out to the entire Bryant family and the families of other passengers on board.”

In addition to his peers in the sports world, sports media also commented on the tragic passing of Bryant.

“It’s just so hard to comprehend the sudden death of Kobe Bryant. I just talked to him less than a month ago when the @dallasmavs were in Los Angeles. He was a great young man. Please pray for his family. RIP,” said Mavs.com writer Dwain Price, a member of the Pro Basketball Writers Association.

Fort Worth Star-Telegram Cowboys beat writer Clarence E. Hill Jr posted on Facebook: “I’m just paralyzed over tragic deaths of Kobe and his daughter Gigi, as a sports fan, as a father, as a journalist… it hits hard.”

Michael Wilbon, ESPN NBA analyst and columnist, a close friend of  Bryant’s, said he was “fortunate to have countless opportunities to talk with, interview, interact with Kobe Bryant. I’m grateful to have had a front-row seat to an amazing life. I think we are all, even now, underestimating the enormity of Kobe’s death on an international level. He was truly a global citizen.”

Bryant was a five-time NBA champion and two-time Olympic gold medalist. He spent 20 seasons in the NBA, all with the Lakers. He retired as the NBA’s third-all-time leading scorer with 33,643 points. He was expected to be inducted into the Naismith Basketball Hall of Fame on the first ballot this summer. He was a head-lining member of a star-studded class that also includes Tim Duncan and Kevin Garnett. He was twice named Finals MVP, 18-time All-Star and 11-time All-NBA First Team.

“For 20 seasons, Kobe showed us what is possible when remarkable talent blends with an absolute devotion to winning,” NBA Commissioner Adam Silver said in a statement. “He was one of the most extraordinary players in the history of our game with accomplishments that are legendary … He will be remembered most for inspiring people around the world to pick up a basketball and compete to the very best of their ability. He was generous with the wisdom he acquired and saw it as his mission to share it with future generations of players, taking special delight in passing down his love of the game to Gianna.”