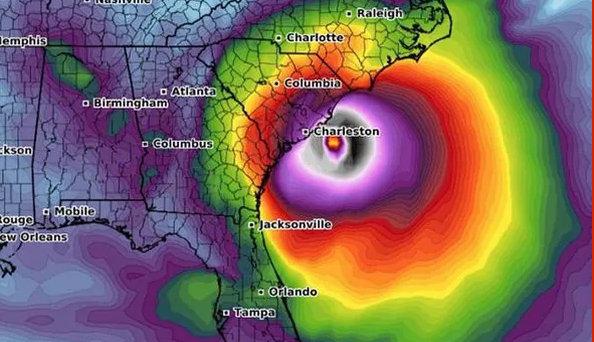 Hurricane Dorian has drowned the Bahamas and devastated the coasts of North and South Carolina. There are trillions of dollars’ worth of damages, and communities that it will take years to rebuild. The fury of this hurricane, some say, is unprecedented, with winds measured at 130 miles per hour at their fiercest.

Dozens of lives have been lost – at least 30, as of this writing, in the Bahamas, and many others here in the United States. As the winds die down, the questions rise up. Could this hurricane and its devastation have been prevented?

What role does climate change play in the destruction this hurricane has caused? Are extreme and unexpected weather patterns our new reality? What does it mean for our quality of life and our economy? One doesn’t have to be a climate scientist to believe that climate change is affecting our weather. But there is a large body of scientific research to prove it.

The ferocity of Hurricane Dorian and the massive destruction it has left in its wake is at least partly due to climatic destabilization. This is why 195 nations signed the Paris Accord, the 2016 agreement to contain greenhouse gas emissions. Many applauded President Barack Obama’s support of this accord. We have been dismayed that the current “President” has indicated his intent to withdraw from the agreement, and has already supported public policy to undermine it.

The willingness of US leaders to ignore the scourge of climate change is challenging. It is also challenging to watch democratic presidential candidates flail around the issue, as they did in the recent CNN debates. To be sure, there was great rhetoric and good ideas, but from my perspective, no robust approach to better managing our environment. Hurricane Dorian reminds us of the urgency of dealing with climate change policy.

It’s a bipartisan challenge since whether you are a Democrat or Republican, you ride on our nation’s highways and drive across vulnerable bridges. The American Society of Civil Engineers (asce.org) rates our infrastructure a D+, hardly a passing grade. It points to deficiencies on everything from our bridges and roads to our water supply, and daily headlines suggest their D+ grade may be generous.

Flint, Michigan has yet again made national news headlines after its water supply has been again polluted. It is easy to focus on Flint, but too many other municipalities also have water challenges, and the public health effects in Flint reverberate all over the country. We have long known of the adverse effects of lead paint on children, yet too many of our schools still are riddled with lead paint. And the beat goes on.

The worst thing is that little has improved between 2013 and 2017 when the last report was released. The “President” knows it, but doesn’t care to use his political capital to spark a bipartisan agreement, but instead prefers to keep up the combative mess around immigration and jingoism. Congress is just back from its six-week break.

Perhaps they will approach our challenges with renewed enthusiasm. From my perspective, the three top things they must deal with are gun control, infrastructure, and climate change. These need to be bipartisan issues, issues that the majority of the population will be positively impacted by. But the rudderless, leaderless Oval Office prefers to engage in a rhetorical sideshow that diverts from the flailing economy (even with low unemployment rates), the white supremacist gun crisis, and infrastructure ineffectuality.

Hurricane Dorian reminds us that legislative malfeasance is unacceptable. To ignore climate change, infrastructure, and gun control is to ignore the issues that are critical to the lives of our nation’s citizens. I’m not surprised that 45 ignores these issues, but what about the Congress, including those who represent areas that Dorian devastated?

Julianne Malveaux is an author and economist. Her latest project MALVEAUX! On UDCTV is available on YouTube.com. For booking, wholesale inquiries or for more info visit www.juliannemalveaux.com