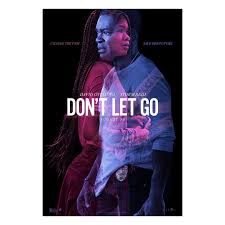 Don’t Let Go is a story about a police detective, played by David Oyelowo (who’s best known for his role as MLK in the movie Selma), who loses his entire extended family to violence.

His brother, who is a “good-for-nothing” irresponsible dad who’s a recovering alcoholic, his sister-in-law, and his niece, played by Storm Reid (A Wrinkle In Time), are all killed by gun violence.

Obviously distraught by their deaths, he goes into a downward spiral of drinking and despair. Then he gets a call from his favorite niece who was killed three days earlier.

At first, he thinks he’s going crazy, but soon he discovers there is someone on the line and he thinks it is his niece. It becomes apparent to him that he has to save his niece in the past so that she can live again in the present.

Of course, he’s afraid to tell anyone that he’s getting calls from his dead niece, for fear of being called crazy, so he has to work alone to help his young niece survive in the past.

Is it a movie about alternate dimensions or time travel? I’ll leave that for you to decide for yourself, but it is a really good crime thriller whatever you decide. The movie will keep you guessing until the very end.

Don’t Let Go is rated R for a lot of violence and gunplay and has a run time of 1 hour and 43 minutes. On my Hollywood Popcorn Scale, I rate this thriller a LARGE.